I love cheap and cheerful if the food is great. But someones, you want great food in a fancy place, and this is how we found Colony, situated just off London’s very chic Marylebone High Street.

Colony opened quite recently, so I have not heard much about it other than that the chef is the Michelin-starred Atul Kochar. So what did a place that Fashpolitico described as “India meets tapas” have to offer?

Well, the place certainly oozes a certain old-school glamour. It’s got a luxurious bar section with a clever seating arrangement that lends itself to privately whispering sweet nothings into the ear of a special someone. The restaurant area is clean and modern, with an organic vibe (in the wood-and-candles sense, rather than the sandals-and-lentils sense), and dim lighting with lots of candles.

The night kicked off with cocktails. I was pleased to see that they had lassis on the list, but I went for a cooling gin and prosecco with cucumber and mint, which managed to be aromatic while also retaining a bit of a kick. We also ordered from the bar menu – a bit-sized selection of pooris, grilled paneer and other things I do not know the name of but found utterly delicious. I was also quite taken with the beautiful presentation. With the dishes that were served, I really felt that they were worth trying to master at home. I think I need to stress that I did not think these were the types of dishes that I could make at home, but more the sorts of things I wish I could make, and plan to start trying to recreate in the next few weeks.

We had mains in the restaurant, and had a great selection of puppadoms and chutneys to nibble on while we made our choices. Again, nice to see a bit of though in terms of the sauces – there was hot chilli, plus spiced apple and a green tomato chutney.

The mains were good (I had a dosa, a filled savoury pancake), albeit quite small, but I think that is more to me being used to Indian food being served in vast quantities. The one issue I did have was with with the spinach, which was one of the most salty things I have ever had in my life (i.e. inedible on its own). It was fine mixed with yoghurt, and when we did say this to the waitress, she was very apologetic. I’m willing to forgive something like that if the staff deal with it well, which they did here, and the rest of the meal was delicious.

With Indian food, I am not a huge fan of their desserts, and I have usually eaten so much that I don’t want one in any event. However, I was keen to try one here, and opted for the mango, pistachio and rose/lychee kulfi. Too often you end up with grainy frozen condensed milk, but not here. Each flavour was fabulous in its own right and displayed the best of their key ingredients – the lychee was fresh and light, the mango was fruity and the pistachio had a creamy nuttiness to it. I loved them all, and would definitely have this again.

On balance, a great place and I would highly recommend it for a cocktail and a light bite if you’re been pounding the pavements in the West End all day.

The name suggests a small creature that might bite you while you are camping in the American wilderness, but it is in fact a very English pudding. Not only traditional, but very simple and such a refreshing treat at the end of a heavy meal. It involves nothing more than fresh double cream, sugar and lemons (or other citrus fruits). Quick, simple and always a favourite. What’s not to like? I also think it fits very well into the “rediscovery” of traditional British food that is on the go at the moment, particularly given that it doesn’t break the bank.

I served this yesterday at the end of an Asian-inspired meal, as I though the sharp lemon kick would be welcome after the various flavours of the evening (satay sauce, curry, raita, coriander sauce, ginger, garlic…), but would keep the aromatic theme of the evening. It went down very well, served together with orange-scented almond cookies. The result is sharp and tangy, so you need to like your lemons if you make this. 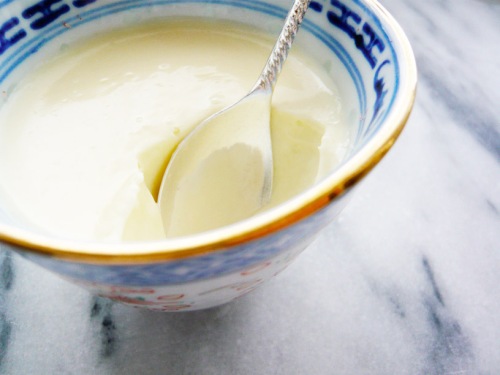 For the lemon posset (to make 8 small portions):

Put the cream, sugar and lemon rind into a saucepan (ideally, grate the rind straight into the pot with the cream – this will also capture some of the lemon oil and help the flavour). Bring to the boil, and cook for three minutes. Keep an eye on the mixture to make sure that it does not burn.

Stir well, and pour into glasses or small bowls. Smaller is better, as the result is quite rich.

Worth making? Yes, definitely. This always goes down a treat, and is super-easy to make. If you have a meal to plan and don’t have time for a fancy pudding, then posset is the way to go. You can also experiment, using lime rather than lemon for a fresher taste, or even use herbs (such as rosemary) in place of the lemon rind to infuse the cream mixture. I’ve had this once with lemon verbena and the result was delicious.