Some fruit looks, smells and tastes delicious. Raspberries, strawberries, oranges…you can see why our ancestors went for them.

And then there are strange things like quince. While quince might look like pears, they have nearly rock-hard flesh and seem to be basically inedible raw. We had a quince tree in the house where I grew up, and it provided very decorative flowers but hard, inedible fruit (as a child, I discovered this quite quickly). So really, why bother? Well, apart from the delicate flowers in springtime, the secret is when you cook them – the flesh becomes soft, pink, fragrant and luscious.

I had a bit of a jam-making binge at the end of last year and had hoped to make quince jam then. However, there are no quince trees in Stokey that I know of, so I rely on the fruit in the local Turkish shops, and I missed the season. Then, a few days ago, I noticed that a box of golden quince had appeared on one fruit stall. I didn’t have time to buy them, but I kept thinking about going back. Today, I was there again and they still had a few quince fruits in stock. I found myself staring at seven of them in the fruit bowl, so what to do? More jam, obviously!

Given they are rock-hard, how do I know they are any good? Well, smell them. They have a floral pear-like smell when ripe. After sitting in the fruit bowl for a couple of hours, the whole living room was lightly infused with their perfume. On this basis, I took the plunge and assumed we were good to go.

But what was this jam going to be like? I am familiar with membrillo, the quince paste eaten with cheese in Spain, and it is a dark red colour. So how does the fruit go from creamy to red? “Magic” seems about right. I see a glimpse of this in preparing the fruit. Making the jam involves grating the quince, and it promptly went a rather unappealing brown. Was this supposed to happen? I was expecting a shift to pink or red, so a switch from light cream to brown was more than a little alarming. Ah, but then you boil the fruit, and you see the promised magic start. The brown vanished and the flesh went back to a delicate pale yellow. The aroma of quince filled the kitchen, and once I added the sugar, it turned slowly but surely to a rich pink-orange colour. Then it was just a matter of boiling, boiling, boiling until the jam hit the jelling point.

Now that I’ve made it, I am very happy I did. I love it. The fruit has gone translucent and a deep peach colour, but even after a long time on the stove, the fruit has kept some of its texture. The flavour is similar to pear, but richer with more depth, and notes of caramel and orange. Certainly a nice change from ubiquitous strawberry or raspberry. I’ve read that the colour will also change with time, deepening to more of a reddish-amber, and I would therefore expect there to be some change to the flavour too. It will be interesting to see how it “matures”, so watch out for Quince Jam Part II.

Overall, the result is fruity and aromatic rather than just another sweet jam. This would be the perfect companion to scones or on a flaky, buttery croissant…so guess what’s for breakfast on Saturday morning? 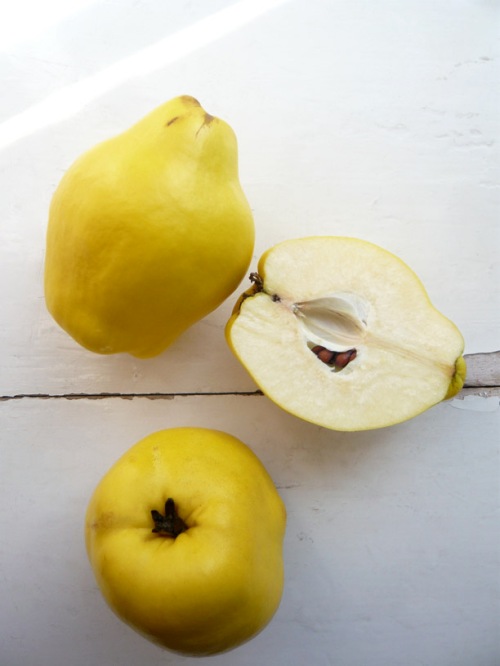 To make the jam (makes around 7 large jars):

Wash the fruit, and grate it. There is no need to peel, just keep going until you get to the core (but obviously, don’t grate the core).

Put the water into a large heavy-bottomed pot, and bring to the boil. Add the quince, lemon zest and the lemon juice. Reduce the heat, and simmer the mixture until the fruit is tender (approximately 10-15 minutes).

Now add the sugar and stir with a wooden spoon until dissolved. Bring to the boil, then reduce the heat and cook on a medium heat until the jam reaches the setting point (this can take a while – up to an hour – but keep checking and stirring regularly to be sure that the jam does not burn on the bottom of the pan). Once the jam is ready, put into sterilised jars.

Worth making? Yes yes yes! This jam really does not involve much more than preparing the fruit, cooking it long enough to reach the setting point and putting into jars. The flavour and colour are both elegant and really quite unlike the sort of jam that you usually see, so it makes a really nice addition to the store cupboard.