The weather on Saturday was glorious in London. I wanted to go and see some countryside, so I jumped in the train from Stoke Newington up to Cheshunt to explore the River Lee park, a network of canals, footpaths and cycle tracks with pockets of woodland, meadow and grassy glades.

The Lee is a tributary of the River Thames, which forms the heart of one of the largest nature parks in or near London. With blue skies, warm air, the fresh green leaves of spring and white flowers of elder and hemlock everywhere, it was truly beautiful. See for yourself below! I will definitely be heading back soon with my bike to see more of the area.

In addition to all the spring flowers, there was also the old scourge of childhood, the stinging nettle. I’ve got to say, the nettles looked pretty impressive in huge drifts along the banks of the rivers and canals. This is spring, so everything looks new and fresh.

Before I set off on my little trip, I had fully expected to come across nettles, and as I had recently seen a recipe in the Observer Food Monthly by chef Silvena Rowe which used them, I came armed with a bag and some gloves. Her recipe involved briefly cooking the nettle leaves, adding them to what seemed like a risotto mixture, then finishing with a good dash of sumac and a generous sprinkling of black onion seeds. I picked a good serving of nettle leaves, then we headed up through the park in the sun. It was hot, and we loved it. A great day out which I can really recommend. Just remember the sunscreen as you are walking along rivers, and you otherwise end up with a very rosy glow by sundown.

Once home, I duly made my nettle dish. While nettles will sting you when you are in the country side or the garden, their sting is neutralised by cooking, and in this case, wilting the leaves in water for a couple of minutes. They also have the advantage of apparently being very, very healthy. I expected this dish to be very much like a risotto…except, it wasn’t. It was delicious, but the texture was more like a rice salad, with a very fresh character from the sumac and onion seeds. The feta provided a strong, salty element to the dish, and on balance, it made a really nice light supper on a hot day. Yes, I was perhaps a little bit red, and a nice light meal was perfect as my body continued to radiate heat long after the sun had set… 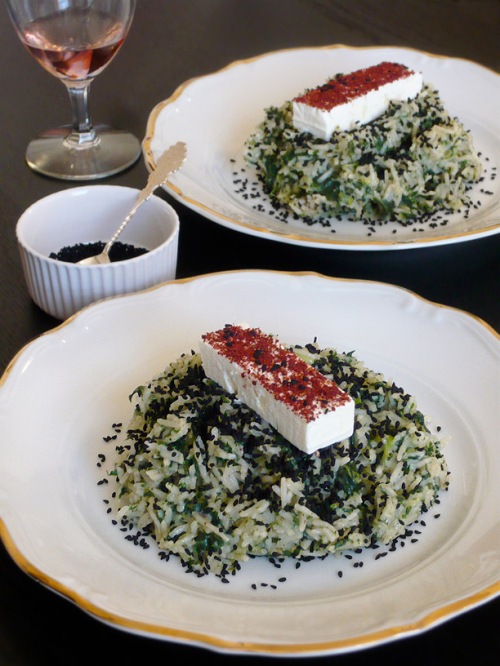 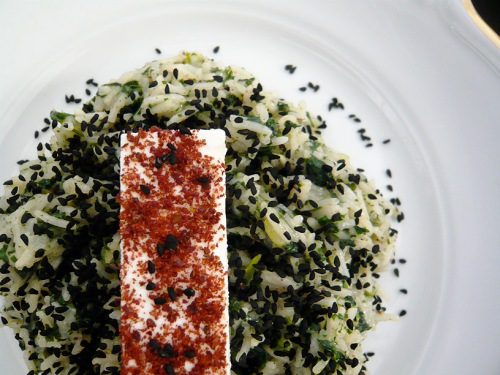 If you would like to try Silvena’s recipe for sumac braised nettles topped with onion seeds, you can find it here.

In making it, however, I made a few tweaks. I used less nettles – probably two cups of just the fresh leaves as this was all I had. I needed to add a bit more liquid during the cooking, and I also added quite a bit more sumac than the recipe called for (probably a whole teaspoon in the end). Finally, I coated the top of the feta in more sumac to provide a bit of colour and to contrast with the rice and nettles. While the recipe is supposed to serve four (and this would be true as a side dish), I think it really makes a generous dinner for two.

Worth making? This is a nice dish which I’ll try again as it makes a pleasant change from risotto when you want to make a rice dish. The black onion seeds were particularly good. However, I’m going to stick my neck out here and say that while I am glad I tried this, but I probably won’t be making it again with nettles. It was interesting to try, but I had expected a bit more “wow” from them. While this dish will probably appear on the menu again, it will be with spinach or chard. I guess I’m just not enough of a fan of cooking dinner in a pair of rubber gloves.

One response to “Sumac Braised Nettles topped with Onion Seeds”