My recent success with elderflower fritters seems to have cured me of my phobia of frying food at home. An illogical fear, I know, as I really love tempura, but I have only ever had it when I’m out for dinner. I like it when the batter becomes crisp and you can still see what the vegetable is. I’m not so keen when there is a lot of batter and just a little bit of vegetable. The batter then tends to puff up and become soft, spongy and heavy. So, feeling a bit bolder, I wondered…would I be able to make something tempura-like(*) at home according to my preferences without setting fire to my kitchen?

This worked really was because the batter was very thin and very crisp, it turned golden quite quickly and so looked appealing, and the asparagus was cooked but still quite firm. Also, the batter did not seem to have soaked up the oil – it may well have done, all I can say is that it was crisp and did not seem to have acted as an oil sponge! I left the satay sauce cold, and in my view, this was a pretty good snack to serve up with drinks on the terrace. 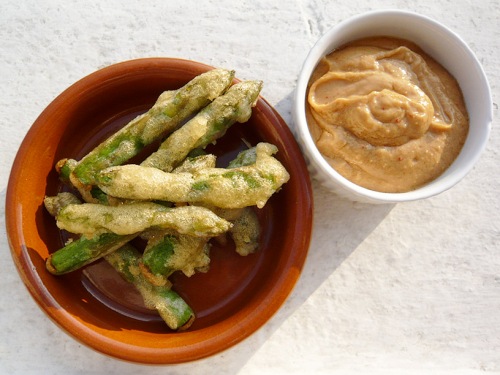 For the asparagus fritters (this would easily coat up to 50 pieces):

In a bowl, slowly combine the flour, oil and water until smooth. Add the sugar. Allow to sit for 30 minutes. Finally, beat the egg white to stiff peaks, then carefully fold into the batter.

Heat the oil carefully. Test it with a small cube of bread – it should brown quickly.

Using fingers, dip each piece of asparagus into the batter, shake off any excess, and drop into the hot oil. Cook until golden.

Serve the asparagus with satay sauce.

For satay sauce: fry some very finely chopped onion, garlic and ginger in some olive oil. Add 4 tablespoons of crunchy peanut butter, and stir well. Add some soy sauce and chilli sauce to taste, and enough water to make a smooth sauce. Cook for a couple of minutes until desired consistency is reached.

Worth making? I was surprised just how good this was. This is in part due to my lack of familiarity with how to deep fry foods, but I have had enough “odd” tempura over the years to be able to say that this version was a decent attempt. I will definitely be making this again in the near future.

(*) I am sticking with the term “fritter” rather than “tempura” as I don’t know enough about making tempura to claim the more sophisticated name.