During a visit to Athens a few years ago, I had a tip about a great vegetarian restaurant. Not that Greek food is particularly anti-veggie, but I liked the idea of somewhere that I really had a full range of choice on the menu. Once we found it, they were incredible friendly, but when we asked for the menu, someone shuffled over to apologise that they didn’t have a menu in English. Well, I had the foresight to learn (some of) the Greek alphabet on the way to Athens, so we decided that we should just wing it and hope we could make out what we were getting. This is probably the worst example of living dangerously I could come up with. We stood a chance of getting peppers instead of olives. The risk of a piece of raw meat being delivered to our table with a flourish were exactly nil.

One of the best dishes was something I had figured out involved feta. This turned out to be a delicious block of cheese which had been coated in flour and black sesame seeds, deep-fried and then drizzled with honey. It was utterly delicious – the cheese was soft, salty and kept its sharpness, and this went well with the crisp coating and the sweetness of the honey. Certainly made a change from the ubiquitous feta/tomato/olive salads! But seriously, deep-fried cheese? Healthy? No. Tasty? You bet!

This is my recipe which seeks to re-create that dish, and I am pretty happy with the result. When I make this, I usually aim for long, thin batons of feta, but each block usually decides that it has had enough and promptly splits in half. I attribute to a “fault” running through every block of feta I have ever tried this with and not sub-standard knife skills on my part.

Apart from the shock separation, everything went as planned. The coating puffs us slightly and turns crisp. The sesame seeds toast slightly and take on a lovely nutty flavour, but if you are a bit of a fanatic when it comes to appearance, try to find black sesame seeds, as they look a little more dramatic in the final dish.

These little blocks of fried loveliness were perfect in the late evening sunshine with some white wine and a light salad. 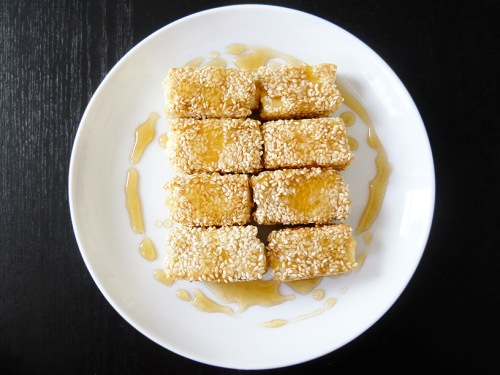 For the pan-fried feta:

Cut the feta into 1cm x 2cm chunks, and place in the freezer for 15 minutes.

Heat the olive oil in a frying pan, and cook the feta on each side until golden. In the meantime, warm the honey in a saucepan until it is very liquid.

Remove the feta pieces from the frying pan, drizzle with a little honey, and serve warm.

Worth making? When I first made this, I was surprised by how well it turned out. The cheese, sesame and honey was a lovely combination. Maybe a little calorific, but then you don’t need to eat so many of them. And a pleasantly different way to serve feta as an appetiser.