In one of the local parks(*) here in London’s glamourous Hackney, there was a fantastic display of cherry blossom earlier in spring. On the off chance, I passed by a few days ago, and bingo! There were loads of cherries on the tree. As you can see below, these were not the large, dark, juicy sweet cherries, but small, bright red and quite tart. They were sweet and edible, but there was a distinct tang to them. They would need to be cooked if their flavour was to shine, and sadly I had not been able to pick enough to make a pie. However, there were sufficient little red fruits for a couple of jars of jam.

Not keen on spending an hour with a knife picking out stones, I bought a cherry stoner. This is a nifty device, where you pop the cherry in the holder, then it pushes out the stone. A great idea, but…it does require you to have cherries that are big enough. Mine were so small – just 1cm diameter – so they were pushed out of the de-stoning device. Somewhat miffed, this meant I had the pleasure of de-stoning by hand after all. Luckily, I could just crush them lightly, then squeeze and the stones came out easily. Some just popped out, whereas others got quite a bit of force behind them and pinged across the kitchen. Quite a few things were jazzed up with little red flecks of red cherry juice. What do we learn from this? Wear something red while de-stoning cherries!

The jam itself was a breeze – boil the fruit, add sugar and lemon juice, boil and keep testing until it sets. At the end, I also added a drop of almond oil just to complement the flavour. Just be careful – too much, and it will be less cherry jam and more like Amaretto liqueur spread. Be judicious – you will need less than you think.

Result? This is a really nice jam – good chunks of fruit and a lovely balance of sweetness and sharpness. If you see a tree groaning with fruit, do it a favour – pick it, cook it and enjoy it. Times are though, so it might even be rude not to! 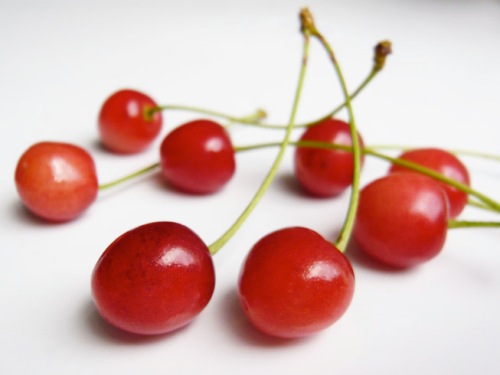 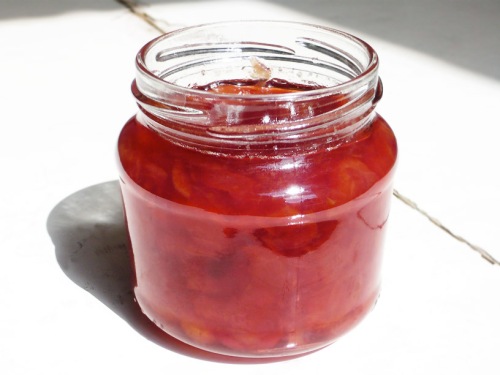 Wash the cherries, removing any stalks or bad fruit. Remove the stones from the fruit.

Weigh the de-stoned cherries, and place in a heavy saucepan with three-quarters the amount of sugar (i.e. if you have 1kg of cherries, use 750g sugar, but you might want to use less sugar if you are using sweeter cherries). Add the lemon juice, and cook gently.

Once the mixture comes to a gentle rolling boil, allow it to cook for as long as is necessary to come to a set(**). Pour the mixture into sterilised jars and seal. See here for how to sterilise jars. My 500g of cherries yielded 2 jars of jam.

(*) Just to say, this is a very large park, and the tree was very far from roads and other sources of nasties.

(**) How to check for a set? Chill a saucer in the fridge. Put a little jam on the cool plate, and return to the fridge for a moment. Push with your finger – if the jam  “wrinkles” when you push it, the jam is done. If it stays liquid, then cook longer. This is why you are better to cook gently but for a longer time, as if you miss the set, the sugar will start to caramelise, and the jam will be very thick, sticky and syrupy.

Worth making? If you get some cherries and need something to make with them, this is a great recipe. This took me no more than 30 minutes to make, and it looks, smells and is delicious. Also a bargain, as I got fresh, sun-ripened fruit for nothing! Result!