At the weekend, I was pondering what to do with a big bowl of wonderfully ripe, aromatic cherry tomatoes, and I hit upon the idea of preparing oven-dried tomatoes. The theory is simple – cut them, stick them in the oven on a low heat, and let them slowly, slowly, slowly dry out.

But how dry do we want them? I like the semi-dried variety. They are softer, and I think tastier, than their very dry cousins, which seems to be due to the higher moisture content. I first had them at a sandwich shop I used to frequent when I lived in Brussels. I became a creature of habit, taking a granary baguette with lettuce, goat cheese, semi-dried tomatoes, cress and rich mayonnaise. Calorific, but incredibly good. With my attempt, I was aiming for something similar – the tomatoes should shrink a little bit, but would remain soft and juicy.

I loved the result. They are so tasty, with an intense flavour that seems to remind you of the summer sun that seems to be getting less and less each day.

To make the oven dried tomatoes:

Wash your tomatoes, and cut in half. You can expect them to shrink to around 20% of their size. Spread the tomatoes cut side up on a baking sheet lined with parchment. If you like, sprinkle with a little sea salt, but if you have very flavoursome tomatoes, this might not be necessary.

Once ready, eat them as they are as a snack, use in salads or sandwiches, or store in a jar with olive oil and some fresh oregano until you are ready to use them. 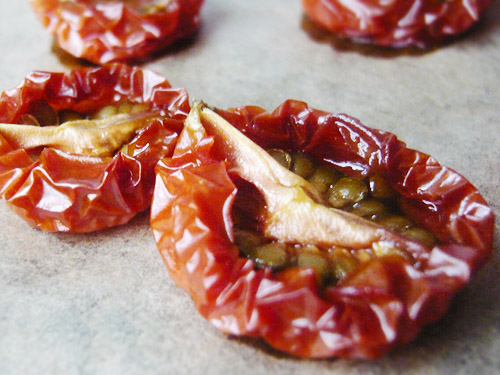