On the fifth day of Christmas, my true love made for me… festive chocolate clusters! Try singing it – it sort of works. Just.

This is just about as simple as baking can get, Pop Tarts excluded. I was attending a friend’s Christmas drinks at the weekend, and had promised to take something. As I have my own drinks event next week, I was a little but protective of my cookies, so I thought about making a little chocolate treat which is packed with all sorts of festive goodies in it. Think a grown-up version of the rice crispie cake.

This was the same crowd that had been wowed by my chocolate tiffin several weeks previously, so it was not a major leap to change from a tray (non-)bake to mini-clusters of seasonal cheer. But I needed a recipe, as I had to get the combination of dry stuff-nuts-fruit-chocolate right. I could wing it, but I did a little research, and saw Chocolate & Zucchini recommended two cups of other ingredients to 250g of melted chocolate. Armed with this rule of thumb, I went forth and immediately started to play around with it. Live dangerously… 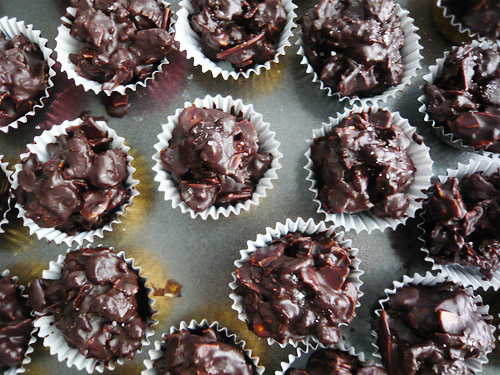 Now…drum roll…while I usually work by weight, this time I went with cups. One cup of “dry” stuff, one-and-a-half cups of dried fruit and nuts (I couldn’t resist adding a but more), and then 250g of chocolate. Simple!

For the “dry” stuff, I used spelt flakes. These have a nice nutty flavour and stay super-crisp even when you’ve added them to something, so that adds a welcome bit of texture. I bulked this out with speculoos biscuits I had in the cupboard. If you don’t know these, they are crisp biscuits that you find all over Belgium and the Netherlands. They have a spicy, gingerbread flavour and because they are made with dark sugar, have a caramel-like flavour and sharp snap. Be on the lookout next time you’re in Rotterdam or Antwerp! So I took my treasured speculoos, smashed up a few and threw them in. This would add some festive spiciness, but provide a bit of variety from the usual cinnamon.

For the “fruit and nuts”, I raided the cupboard and went for broke. Whatever I could find. Toasted flaked almonds, chopped glacé cherries, chopped apricots and juicy sultanas. This provided a few different textures, flavours and colours to brighten up my clusters.

All of these tasty good things were going to be lovingly enrobed in melted dark chocolate, and then lovingly spooned into little mini-cupcake cases. The chocolate was also lovingly mixed with a large pinch of finely ground sea salt to enhance the flavour, and a tablespoon of good old British golden syrup, to provide a little rich sweetness, and the make the chocolate a little softer in the finished clusters. I wanted them to set, but not to be rock hard.

Once I had prepared the mixture, I had grand plans to be über-efficient, and put the mixture into a piping bag to fill my cases, but the mixture was clearly setting too quickly on what was one of the coldest nights of the year. So back to basics, just me and a couple of teaspoons. And as you can see, the results are actually pleasingly irregular. Sometimes a sultana perched on top, sometimes flaked almonds peeking out side.

These clusters are delicious. Rich, crisp, juicy and nutty by turns, and – dare I say it – a complete success. They are also endlessly customisable, so just throw in whatever you want, although I am rather taken with flaked almonds and apricots. 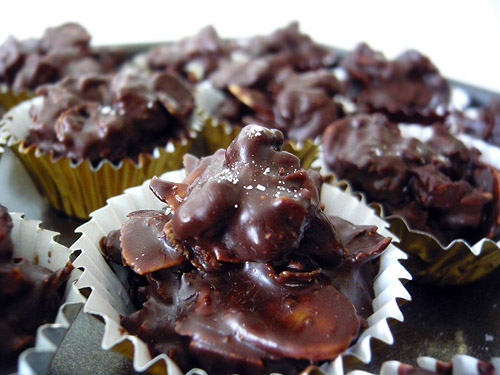 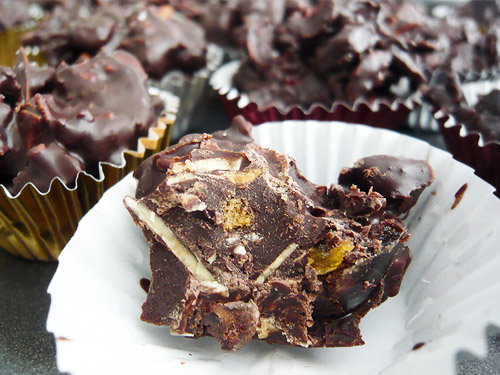 Place the chocolate, salt and syrup (if using) in a double boiler and allow the chocolate to melt. Stir well.

In the meantime, combine the dry ingredients and the nuts/fruit in a bowl. Combine well, ideally using your hands to break up sticky bits of fruit.

Pour over the melted chocolate, and mix until combined. Use teaspoons to transfer the mixture into mini-muffin cases. Sprinkle with any toppings (tiny flakes of salt, gold leaf, chopped pistachio…or leave au natural) and allow to cool.

Best served at room temperature so that the chocolate is softer and the flavours more intense.

(**) I used 35g sultanas, 45g glacé cherries, 45g toasted flaked almonds and 80g dried apricots. And I mean pressed down in the measuring cup, to get the most fruit you can fit into these little treats!