To contrast with the very, very sweet tablet I posted a few days ago, clapshot is the polar opposite. Very simple and very savoury. Looking at the list of ingredients, I concede that it does not sound so very exciting, but I can assure you that it all works together beautifully.

Clapshot originates in the north of Scotland, with Orkney usually suggested as its birthplace. This would probably have been the main part of the meal back when life was a lot less comfortable than it is today, but for modern tastes, this makes a fine side dish too.

Now, as if just to prove the point of how different the Scots are, when we talk about “turnip” we mean the orange root vegetable others refer to as swede. If you use white turnips…well, I have never made this with white turnips, but I would imagine that it does not become as soft as swede, so it will be altogether more lumpy, so the dish won’t look as good. By all means try it, but you have been forewarned! In contrast, swede becomes wonderfully juicy and tender when boiled, and changes from a dull peachy hue to a vibrant orange colour, which looks rather fetching against yellow potatoes and flecked with green chives and black pepper. The taste is interesting, and incredibly more-ish: the sweetness and aroma of the swede comes out and mixes with the sharpness of the pepper and chives, tempered by the creaminess of the butter. All this from potato and turnip!

Simple? Yes. But something to tickle the tastebuds? Most certainly. 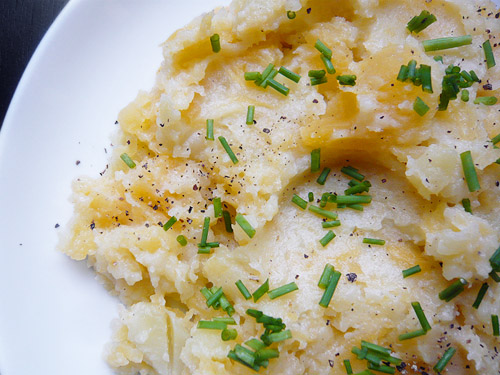 To make clapshot (as a side for four or main course for two):

Bring a large pan of water to the boil. Add the turnip and potato, and cook until the vegetables are tender. Drain, and return immediately to the pot.

Add the butter, chives,  salt, pepper and milk, and use a masher to roughly combine the turnip and potato. Make the mixture as rough or smooth as you like (I like to leave it a little lumpy). Serve straight away while still hot.

If you want to prepare ahead of time, omit the chives when mashing the clapshot. Reheat in an ovenproof dish covered with tin foil, and mix the chives into the clapshot when it comes out of the oven.

If you are feeling creative or want to mix it up a little, you could add a pinch of nutmeg, or use the butter to fry a little chopped onion to add to the mash.

Worth making? Given how simple this sounds, and how quick it is to make, clapshot is very tasty, and a nice way to vary the selection of winter vegetables.