Živjo! If you are mystified, we’re heading to a country that has it all – scenic snow-capped mountains, verdant countryside, sunny Mediterranean coastline and a selection of beautiful towns and cities to tempt the visitor. Yup, it’s Slovenia, the only country in the world with “love” in its name. 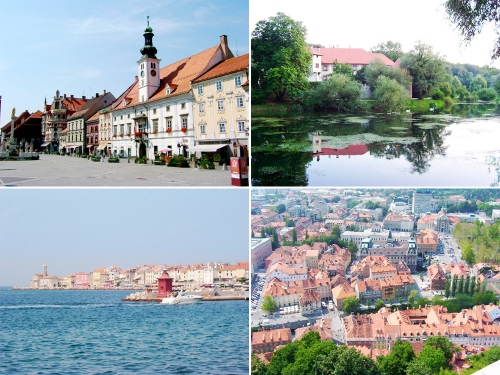 I was recently given a challenge by Fashpolitico to make something with tarragon. Rather than go for something predictable, such as a herb-rich sauce for a main course, here is a recipe from the lovely land I just described. Here is  a recipe for potica (pronounced po-teet-sah). 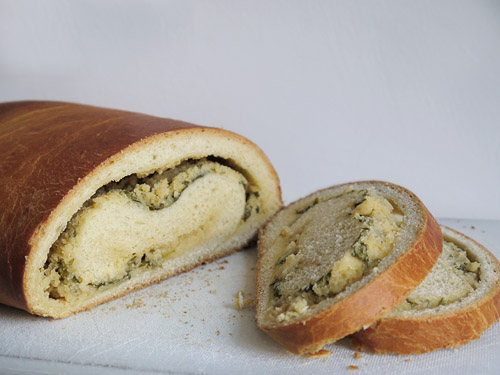 But first things first: why is Slovenia such a great place? Apart from the above and some lovely friends from this part of the world,  I have fond memories of a summer holiday there, as well as a great New Year’s Even in the capital Ljubljana when the Euro was being introduced. In Brussels years before, the bars had adhered to the rule that you had to give change in Euro from the stroke of midnight, and with all the “festivities”, no-one was really able to do the required mental maths. But in Slovenia, the locals didn’t really get why anyone thought this was exciting. Ever the pragmatists, the Slovenes just ignored the “midnight” rule, so if you paid in tolar, you got tolar back. Pay in Euro, get Euro back. It was a big party, after all, and the arithmetic would only start on 2 January when our headaches had cleared and we were better able to handle such things. Euro aside, it was a fantastic New Year in a small but beautiful city. We visited the castle, looked around the food market and ate rather a lot of cake at a rather superb cake shop, Julia (Stari Trg, just off the Old Town).

And what of the potica? This is basically an enriched dough with yeast, rolled out and spread with some sort of filling, then rolled up, Swiss-roll-style before being left to rise. A little research reveals that this pastry can be eaten plain, with jam or butter, toasted or even – in a nod to Slavic tastes – with a slab of sausage. Yes, that is sausage, on what I assume is a sweet cake. Go figure.

As promised, this version of potica contains tarragon, which is something I would usually expect to find in a savoury dish, as part of its role as one of the fines herbes of Mediterranean cooking. So let’s whack it into an enriched bread and see what happens, alongside a rich, buttery custard. Drooling already? 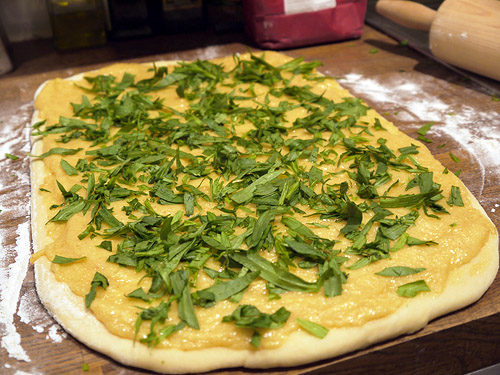 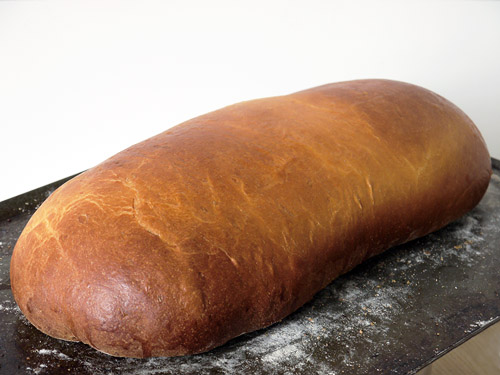 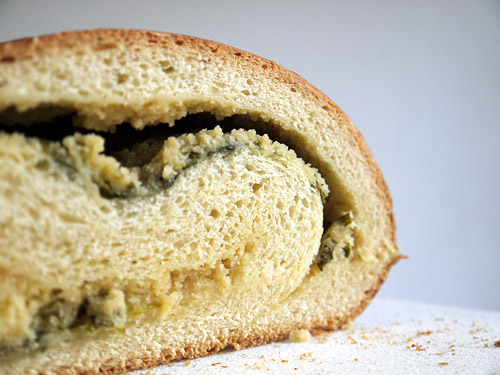 The dough was the easy part. The filling, less easy. I followed the directions I had, but ended up with something the consistency of milk. I may be a novice at making potica, but I knew something was not right. Given that I would have to spread this as the filling, it ought to have been thicker, and what I had was clearly going to leak out and go everywhere. So the whole lot went into a saucepan, and I stood there patiently with a balloon whisk, stirring until it seemed reasonably thick. Once it had cooled and the dough was ready, it spread perfectly. Tarragon duly chopped, it was scattered on top, and the whole lot was rolled up.

Now at this stage, I think I went a little off piste, and took the lazy route by not rolling the dough thin or large enough (to get an idea how it should be done, see here!). I probably got 2-3 turns of the dough, so ended up more with a swirl than a spiral in the finished loaf. But these are as mere details, as it still looked pretty good, the dough rose magnificently (to give some context – the loaf was the size of a large cat!) and it took on a lovely golden sheen when baking.

But most importantly of all – how did it taste? The tarragon is…odd. Actually, quite pleasant, like a mild aniseed. I liked it, and I think if you like aniseed, you would like this too. It’s a little like a brioche with some sort of custard filling, and really rather good when taken with a cup of morning coffee. It’s probably not authentic, but at least I get the credit for trying. Now I just sit back and wait for the reaction from my Slovene friends – and I’m sticking my neck out by offering to try to make this again in line with any suggestions they care to share with me!

To make the dough: in a bowl, combine the ingredients and knead well until you have an elastic dough (5-10 minutes). Once ready, leave to prove in a warm place until doubled in size. Alternatively, put everything into a bread machine, and leave to run on the “dough” cycle.

To make the filling: Melt the butter in a frying pan, and cook the breadcrumbs until just coloured. Allow to cool. In a large saucepan, combine the cream, sugar and eggs, and stir with a whisk until smooth. Fold in the breadcrumbs, then cook on a medium heat until the mixture thickens. Leave to cool.

To assemble: roll out the dough into a large rectangle. Spread over the filling, scatter over the tarragon, then roll up (think Swiss roll!). Seal the edges, and place onto a large baking sheet. Leave in a warm place, under a damp cloth, until doubled in size. Brush with milk and bake in the oven at 150°C (300°F) until golden brown. You may have to turn it around in the oven to ensure the colour is even.

Worth making? This was a new recipe for me, and while it was nice and did expand to hilariously large proportions, I won’t be making it exactly this way again. Why? I think the mixture works, but it would be better done as little individual rolls, and then vary the filling a little – some with tarragon to keep the Slovenian connection real, but do other with sultanas, chocolate, citrus, poppy seeds….  Maybe, just maybe, we are getting a little far from the Slovenian original, but this sort of cross-cultural cuisine is part of what Europe is all about. Srečno (good luck)!