As you might now be aware, I had a really great holiday on Mallorca…but there is just one little niggle…

…you see, they have a rather amazing-looking pastry over there – the ensaïmada – which is a sweet, enriched bread, formed into a coil and dusted with icing sugar. The problem? Well, they are made with a good lump of…lard.

Indeed, the clue is in the name – “saïm” is the local name for a type of reduced lard, so they translate roughly as “lard things”. So a case of “look, but don’t touch”.

For better or for worse, I found this out before I went, so of course, once I was out and about, the things were everywhere. Ensaïmades beckoning from every bakery, every café, every shop. Kids wandering the streets munching on the things. I was even handed one in the airport wine store as a souvenir. So it’s very, very lucky I have a will of iron.

Now firmly back in the UK, and with all the excitement of the Royal Wedding behind us, I decided that I would give these a try myself, but make a vegetarian version of them. So I’ve replaced the lard with butter and a bit of olive oil. So maybe not exactly healthy, but heck – I resisted for a week!

The process for making them is pretty easy and quite good fun, but it just takes a while. You start off making a dough, which I did by hand (and ended up with very sore arm muscles in the process). Once the dough has risen once, you knock it back, then roll out portions as thin as you can, brush with soft butter, then roll them up and form into spirals. I’ve done a little research, and I have concluded that lard probably works best, so if that’s your thing, then go for it. However, my butter version is still pretty darned nice, if not quite as flaky as the authentic Mallorcan version.

And the shaping process is also important – the dough needs to be as thin as possible, so when they bake, you get maximum puffiness and volume. And you need to let the rolled up dough rise first, then carefully coil it loosely afterwards – you really want the breads to be big but quite flat, rather than a round dome shape. Make sense?

Once they were kneaded, brushed, shaped and risen, they went into the oven, and emerged puffy and golden. I gave them a quick brush with more melted butter (yay!) and a dredging of icing sugar later, and they looked absolutely perfect. 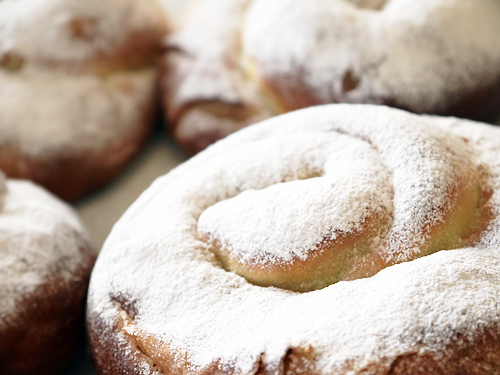 But looks are not everything – finally I was going to get to taste an ensaïmada.

Happily, I can report that mine were delicious. Rich, slightly sweet and very, very buttery. The process for making them means that they are a delight to pull apart as you are eating them too, so perfect for people who are partial to playing with their food. I like to do that. 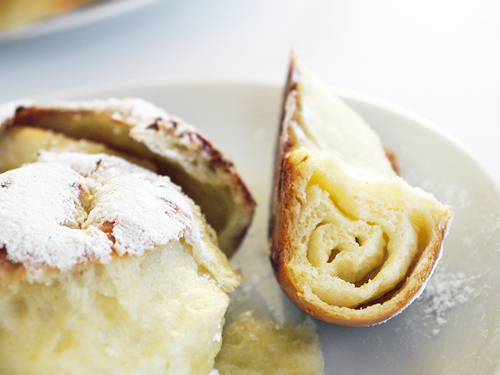 To make the dough:

By hand: Combine the yeast, 2 tablespoons of white sugar and warm milk and allow to sit for 15 minutes until frothy. In a separate bowl, combine the flour, salt and remaining sugar. Pour the yeast mixture into the flour and mix as much as you can (it will be very dry). Add the eggs and olive oil, and work until you have a smooth, soft, elastic dough (about 10 minutes). Once the dough is made, cover the dough with a damp cloth and leave somewhere warm until doubled in size (around 1 hour).

By machine: Combine the yeast, 2 tablespoons of white sugar and warm milk and allow to sit for 15 minutes until frothy. Put the yeast, flour, salt, remaining sugar, eggs and olive oil into the bread machine and run the dough cycle.

Knock back the dough and knead again for a minute. Divide the dough into 12 portions. Roll each portion as thin as possible (as in – really, really thin). Brush each generously with softened butter. Roll up the dough (Swiss-roll style) and put on a baking sheet. Cover with a damp cloth and leave until doubled in size (around 1 hour).

Next, take each piece of rolled-up dough, and form into a loose coil (gaps will be filled when they rise again). Transfer each coil to a well-greased baking sheet. Cover with a damp cloth or a piece of oiled cling film and leave until – you guessed – doubled in size.

Bake the ensaïmades until they are golden brown (about 15 minutes). Once cooked, remove from the oven, allow to cool for a few minutes, then brush lightly while still warm with melted butter and dredge with icing sugar.

Worth making? They might be a lot of work, but they are fun and taste really good. I will be making these again, more likely for a special occasion than for an everyday breakfast, but a nice way to bring a little Mallorcan sunshine to the early mornings. If you’re so minded, you can also change them with a dusting of cocoa powder in the filling, or add cinnamon or raisins.