Today we’ve hit upon that rarest of Christmas goodies…something that contains no spice! That’s right – no cinnamon! Nutmeg is absent. Mace is but a stranger. Cloves are no-where to be seen. Cardamom-who?

Yes, it’s Stollen time, and frankly, this tasty treat has just so many other good things in there that you don’t miss the spices. 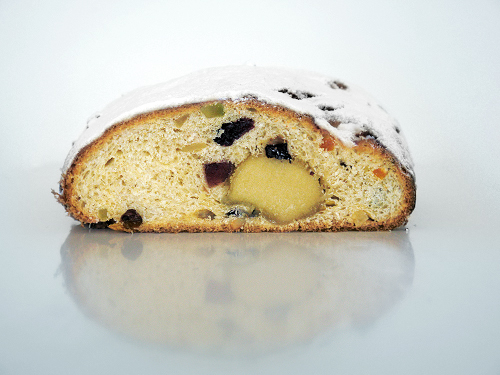 This is another of those traditional German festive bakes. It just affirms my belief that Germans are just very, very good at this stuff. Visit a German city at this time of year and there are biscuits galore, stalls selling piping hot Glühwein with a shot of rum, decorations, oom-pah music and a good measure of festive cheer. When I lived in Brussels, the trek over to Cologne or Aachen became an annual tradition.

As for the Stollen, this is a rich, yeasted loaf enriched with fruit, cherries, nuts and citrus peel. When it comes out of the oven, the whole thing is brushed with melted butter, then covered in icing sugar. Some recipes even call for the whole thing to be dipped in butter! However, there is also a little surprise. There is a big old seam of marzipan running through the loaf. I have a little theory that the way you eat Stollen says a little about you. I am a picker, nibbling bits of the bread, then ending up with the marzipan at the end. I also tend to dissect bourbon biscuits and custard creams in the same way…

This recipe also has a lot of symbolism and history. There are records and recipes in Germany as far back as the 1300s, and the marzipan wrapped in the dough symbolises the infant swaddled in cloth. I really like this idea of symbolism, and it is nice that these traditions are still with us, all these years later! 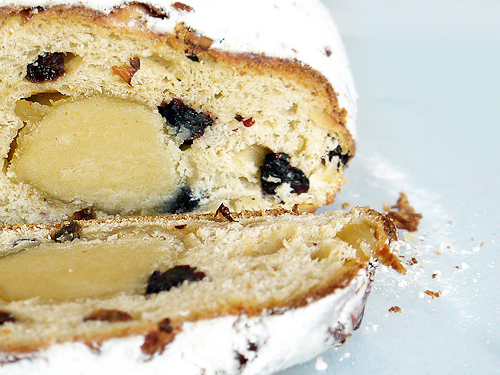 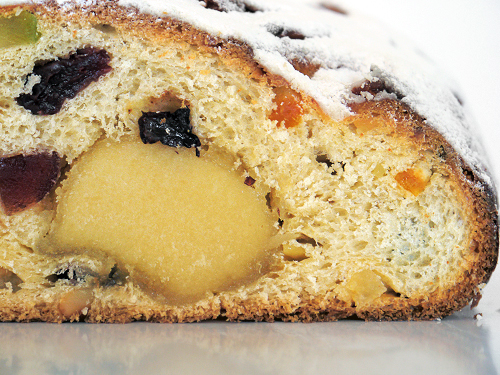 To make the dough:

Mix the milk, beaten egg and rum/water, and pour into the bread machine tin. Add the sugar and butter. Spoon in the flour and add the yeast. Run the dough cycle.

To shape and make the Stollen:

Knock back the dough, and turn onto a lightly floured worktop. Roll out to a large square. Spread the sultanas, cherries, candied peel and slivered almonds over the dough. Fold it in half, and then fold in half again. You should have all the “nice bits” safely in the dough, and a nice smooth outside.

Roll the dough again out to approx 25 x 15 cm (9 x 6 in). Form the marzipan into a long sausage and place in the middle of the dough(**). Fold the dough over the marzipan, tuck the ends, then flip over and put onto a greased baking tray lined with greaseproof paper. The seam should be on the bottom.

Leave in a warm place, covered with a damp teatowel, until doubled in size. In the meantime, preheat the oven to 200°C (400°F). When ready, bake for around 30 minutes until golden (turn half way through if needed).

To finish the Stollen:

Once the Stollen is ready, remove form the oven. Melt the butter, and use it to brush the warm Stollen. Cover with the icing sugar, and add another dusing of icing sugar just before serving.

(*) If you like soft, squidgy marzipan, mix it to a thick paste with a spoon or two of rum or water.

(**) You can form the marzipan into a round sausage (as I did) to get a disc of marzipan when you slice the loaf, or you can flatten it so you have a strip in each slice of Stollen.

Worth making? I have a long-held soft spot for Stollen, and I was impressed with just how easy it is to make. It tastes great, and makes a lovely lighter alternative to heavy Christmas cake. The lack of spice makes it good for those that prefer things a little milder, but you can of course still add a teaspoon or two if you’re really hooked on cinnamon, allspice or nutmeg.