After dinner at Kipferl and Styrian pumpkin oil, I’m continuing with my little fling with Austrian food.

I’ve had a go at making probably the jewel in the crown of Viennese cakes – the Sachertorte. This is a rich chocolate sponge cake, filled and coated with apricot jam, and covered in a smooth, dark chocolate icing. This is decadence, pure and simple.

I have enjoyed this cake several times on visits to Vienna, and on a chilly winter day, there are few things as satisfying as taking a seat in a grand café, ordering from a prim waiter, and receiving a slice of this chocolate cake with a cup of Wiener Melange coffee. It’s not light and it’s not healthy. It doesn’t pretend to be, but it’s a vital part of any visit to the Austrian capital.

So…how easy was it to make at home?

I was quite keen to have a go at this cake for a few reasons. Mainly, I’ve been working like a mad person recently, and needed a little project that would let me switch off for several hours, and focus on things like whether almonds had been properly ground, had I whipped the egg whites properly, and just how do you line a cake tin without all the paper collapsing. So on that front, it worked like a dream. And it also provided a bit of a diversion from the fact that it’s wet and cold outside, with occasional hailstorms…great British weather and all that…

I was also keen to try this cake because while I’ve tried to make Sachertorte a few times in the past, those attempts have tended to be a bit too dense and a bit too lacking in jam. I think the sponge needs to be light, there should be lots of sticky apricot jam between the cake and the icing, and there needs to be a good, thick layer of smooth, dark chocolate icing. I am sure that many Austrians have a view on exactly what a “proper”, but I am sure that it does not involve a dense cake. So it was time to sort that out once and for all.

Before delving into the baking, it’s quite interesting to learn about the history of this cake. The Sachertorte, like all pieces of classic baking, has rather an interesting story behind it. It was originally created back in the 1830s by an apprentice baker, Franz Sacher, who had been instructed by a prince to make something that would not bring shame on his employer. We can only guess what would have happened if he had disappointed his master, but the dessert did indeed prove to be a source of pride, and went on to become a favourite of Viennese café society.

However, unlike the coffee, things got bitter when the Demel bakery and the Hotel Sacher got into a bit of a spat about who could claim to make the original Sachertorte. This was all sorted out, but not before they had engaged in two decades of litigation. All over a cake. So…you can see why Austria celebrates National Sachertorte Day on 5 November. It’s a serious business, and many, many slices of this cake are consumed each year by visitors and locals alike.

The fact that people fought about this cake for 20 years tells you that the recipe is a closely-guarded secret. This means the recipe I have used is probably not authentic, but I think it comes pretty close.

I’ve used finely ground almonds in the sponge, which means that the cake is more moist than one made just with flour. I’ve also added a little very strong, cold espresso into the mixture. This might sound a little odd, but believe me, it works – it just adds a little extra something to chocolate recipes.

The batter is also supposed to rise all by itself thanks to the air incorporated into the creamed butter and sugar as well as the whipped egg whites, but I cheated. I was worried that I wouldn’t get the desired lift, so I used self-raising flour instead of plain. As there was not too much flour in there to begin with, it wasn’t a major change, more like a tweak, and I think it turned out just right. 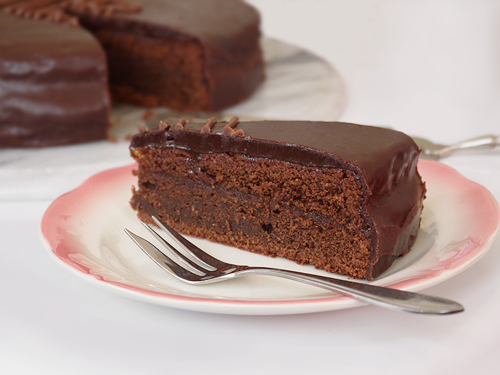 Now, I’ve mentioned the jam, and on this point, I firmly believe that more is very much more. I cannot abide a miserable smear of jam. It just seems cheap. So get hold of the best apricot jam that you can, and use lots of it – both in a layer in the middle of the cake, as well as just under the icing. As a rule of thumb – you’ll probably want to use a whole jar of the stuff.

You might also have noticed the letters. Yes, it is traditional to write the name of this cake on top of it. I don’t know why, but it is. I’ve seen various versions over the years, usually a sweeping cursive style, but I decided to do something different. With a nervous hand, I attempted something that recalled the Wiener Werkstätte style of lettering, albeit one that probably owes more to Glasgow’s Charles Rennie Mackintosh and the Willow Tearooms than Vienna’s Hotel Sacher…but I like it!

After all that, how was the cake? I’ll admit that this does not have the perfect look of a cake that you can buy, but that aside, I was frankly chuffed to bits with how this turned out. With a dollop of whipped cream on top and a cup of coffee, this did bring back a few memories of chilly days in old Vienna (the current London cold snap providing the necessary chill for the time being).

I’ll just finish off by saying two things about making a Sachertorte. First, it’s not a recipe that is particularly difficult, but it is a little bit time-consuming. This is not something that you can whip up in about 10 minutes, but it is suited to a rainy day when you’re nipping in and out of the kitchen, and you’re mind is on a few other things at the same time. Second, this is a recipe where you want to use an electric beater or a KitchenAid. There is a lot of effort needed, and you’ll otherwise end up with very sore arm muscles!

This looks like quite a complex recipe, but it isn’t – I’ve just set out the various steps to follow, and hopefully it’s actually quite easy!

For the cake (sponge adapted from Mary Berry’s recipe):

To make the cake:

Melt the chocolate in a bowl set over a saucepan of simmering water. Stir from time to time until it has melted completely, then leave to cool slightly. We want it to be just warm (and not hot).

In a bowl, beat the butter until very soft. Stir in the sugar, and whisk until light and fluffy. Mix in the vanilla and cold coffee. Add the melted chocolate, and mix well – the mixture should be very light and fluffy by now.

Add the egg yolks, one at a time, beating well after each addition. By now, the mixture should be really light and fluffy. Combine the flour and ground almonds in a bowl, then fold this into the chocolate mixture. The mixture will be getting quite thick by now.

Pour the mixture into the lined cake tin and use a spoon or spatula to smooth the surface. Bake for 45-50 minutes until the cake is risen and the surface springs back when you press lightly (if you press too hard, the cake acquires dimples). Otherwise you can insert a skewer – the cake is done if it comes out clean.

Remove the cake and leave to cool. Cover the top with a clean tea towel – this will capture some of the steam and keep the top of the cake moist.

To add the jam:

Take the cold cake, and cut in half (horizontally, obviously!).

Put the jam into a saucepan with two tablespoons of water. Heat until the jam is runny and just boiling. Pass through a sieve to remove any “bits”, then allow to cool for a moment.

Cover the cut side of the cake with around half the warm jam – it is easiest to pour in into the middle, then spread using a spoon. Put the other half of the cake on top, then pour the rest of the jam on top of the cake. Use a pastry brush to spread the jam all over the top and sides of the cake.  Leave until the jam has set.

To make the icing:

Melt the chocolate and butter in a bowl set over a saucepan of simmering water. Stir from time to time until it has melted completely, then leave to cool slightly. We want it to be just warm (and not hot).

In a saucepan, combine the water and sugar. Heat until the mixture reaches the thread stage (107°C). If you don’t have a thermometer, you can test it manually – let a few drops fall into cold water. The syrup will form a “thread” but doesn’t allow you to roll it into a ball. Once you get to this stage, remove the pan from the head, put the base in cold water, and allow it to cool until just warm.

Mix the cooled syrup and cooled (but still molten) chocolate until you have a smooth, glossy icing. Allow it to cool until it is thick but still flows, and pour onto the cake. Smooth over the top, and spread a little of it down the sides to that the whole cake is coated.

Leave the icing to set overnight. The cake is also better if left to sit overnight, so you’ll just need to learn to resist temptation.

If you have a disaster with the icing (either the chocolate “splits” and becomes oily, or it seizes up and becomes grainy), you can save it by boiling four tablespoons double cream, and adding to the icing to form a ganache. Whisk together the warm cream and chocolate icing, and all should be well again.

To write the “Sacher”:

To finish the cake, melt the milk chocolate and add just enough cream to make a smooth icing. Allow to cool until it thickens, then use to pipe the word “Sacher” on top of the cake, using the font of your choice.

Worth making? If you’ve got a day to have a go at this cake, and the patience of a saint, then this is a great recipe that produces an amazing result. Well worth having a go at!