Valencia, in my dreams it always seems,
I hear you softly call to me!
Valencia, where the orange trees forever,
Send the breeze beside the sea!

Yes, that it the theme song of the Spanish coastal city of Valencia. I visited it a couple of years ago, in the middle of a local festival (The Feast of the Left Arm of St Vincent, or similar), and you could hear that tune for hours on end. It’s quite infectious and lends itself to getting into the party mood. It’s a great place – a beautiful old town with traditional architecture, stunning modern architecture, and a unique park planted along the former riverbed that snakes through the city.

When travelling, I am always one for trying local specialties, and in Valencia two things stood out. The first was the agua de valencia, a rather lethal combination of cava, gin, sugar and fresh Valencia orange juice. Very drinkable, but the next morning, you are feeling, well….shall we say, less than alert.

The second was more suited to daytime activities such as museums, churches and all that Valencian art. And believe me, you will need a little pick-me-up after all that agua de valencia the night before. I’m talking about a drink called horchata de chufa (in Spanish) or orxata de xufes (in Valencian), which you can find for sale on many street corners.

Horchata refers to a range of drinks often made from nuts, seeds or rice, which are ground and mixed with water and a little sugar to make a “milky” beverage. This version is one that is common in Spain, where it is often made from tiger nuts, and which is lightly flavoured with a touch of spices and citrus peel.

Yes, tiger nuts. Chances are that you’re probably not familiar with these little fellows as they are pretty uncommon outside of Spain. However, they are to be found pretty much everywhere in Valencia and you can usually hunt it down in other Spanish cities if you look hard enough. I’ve certainly never seen them in London, but that’s not to say you would not be able to track them down if you were willing to commit some serious shoe leather to the task.

Chufas (to give them their Spanish name) are not actually nuts, but small tubers of a member of the sedge family of grasses. They are the size of hazelnuts, but look like small, shriveled potatoes or dried-out root ginger. So they’re nothing more fancy that little bulbs! However, if you soak them, the tiger nuts turn back the years, absorb water and become plump.

The actual horchata you make from chufas is not pure white (as it would be if made from rice), but has a very light tan colour. It has a certain richness in terms of texture, and the flavour is fresh but not heavy. The cinnamon and lemon zest add a certain aromatic quality to it, but the flavour is nutty – think fresh almonds or hazelnuts with a hint of vanilla. It is very much a drink for a hot day – either served over ice, or even served like a frozen milkshake – an Iberian snow cone!

So why all this background? Because when I was in Barcelona in early springtime, I went to Casa Gispert, a specialist shop offering a vast selection of nuts and dried fruits, as well as seeds, oils, wines and chocolate. A good place for a bit of a rummage. Way, way at the back of the shop I found bags of chufas. I knew immediately what I should buy them. It was finally going to be horchata time. 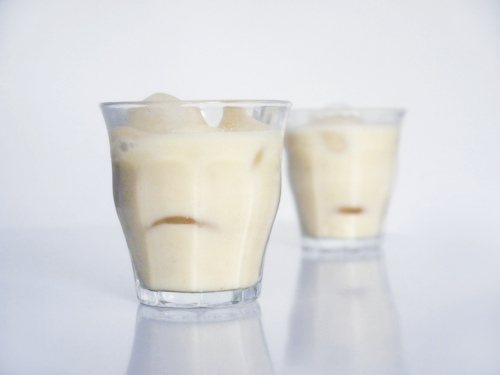 Now that was a little easier said than done, for I was really making something completely outside my comfort zone. No idea whatsoever. Flattering myself that I can sort of guess whether a recipe would work out or not, I perused a few websites to come up with something that seemed sensible (see here and here). However, I’ve come up with my own version (below), which is a bit of a make-it-up-and-hope-for-the-best sort of recipe, but it seems pretty darn good to me.

The locals actually take their horchata de chufa so seriously that they have gone so far as to set up a council to regulate local tiger nut production, with some interesting-looking recipes. However, I must draw the line at this one. To understand the joke, I should explain that many cafés in Valencia serve horchata with a sweet iced bun. All very nice, but these buns are lumbered with the unintentionally hilarious name of farton. Hilarious to the ears of an English-speaker, but I am sure the poor waitresses were rather over the schoolboy humour.

Naughty jokes to one side, although making horchata takes a bit of time, most of that time is spent letting things soak or infuse. It’s actually a doddle to make and makes a really pleasant, refreshing and different drink for a warm day. Salut!

2. The next day, rinse the tiger nuts, cover again with fresh water and soak for a second night. The tiger nuts will change from small and wrinkly to smooth-ish and plump-ish, but should still feel very firm.

3. Rinse the tiger nuts thoroughly, remove any bad nuts, and put them into a food processor with about 200ml water. Grind as finely as you can. You might want to do this in smaller batches.

4. Pour the tiger nut/water mixture into a pot. Add the remaining 400ml water, the cinnamon and lemon peel. Stir and leave to sit in the fridge overnight.

5. Stir the horchata mixutre, then strain through a piece of muslin cloth to remove the bits of tiger nuts, cinnamon and peel. Squeeze the cloth to get as much liquid from the nuts as you can.

6. Add the salt to the milky liquid, and sugar to taste. Stir well to dissolve the sugar, and serve ice-cold(***).

(*) If you don’t have tiger nuts, you could use almonds or other nuts instead. If you do this, just soak the nuts overnight once as they soften more easily than tiger nuts.

(**) Salt is optional – I like it as it enhances flavours, but entirely up to you. Most likely not authentic…

(**) Horchata keeps for a day in a cold fridge, but won’t keep much longer than that.