Yes, I am back from my big holiday in the US – lots of pics and a write-up coming soon! In the meantime…my “back from holiday” recipe

If you’re anything like me, you will have recently gotten into the Halloween spirit and bought lots of pumpkins and squashes, carved them, and then been left with some amazing lanterns plus lots of pumpkin flesh. So what can you do with it? Well, I made the lot into soup, but got back from holiday this week, and still found an assortment of squash in the fruit bowl. So…

While I think I have a pretty amazing pumpkin soup recipe (I usually enhance the flavour with lots of spice and top it off with toasted pumpkin seeds for a bit of crunch) as with so many things, there comes a point where you want something a bit more creative than soup. Back at home, suitcase in hand, I wanted to make something that did not involve a trip to the shops – I’d just “enjoyed” 8 hours in a plane, two busy airports, a severe lack so sleep, jet lag and a trip on the tube, which made a trip to the local store unappealing. So I came up with the idea of making pumpkin gnocchi with the stuff I had in the fridge and cupboard.

At this point, I can imagine some Italians clasping their hands to their faces in horror as an outsider commits culinary heresy with their classic little potato dumplings, but this was a tasty little dish so frankly, I’m not too worried. Indeed, there’s actually a lot of variety out there with gnocchi seemly made from just about anything you can imagine, so there may even be a strand of Italian authenticity in here somewhere.

This is a remarkably easy dish to make, provided you’ve got a little time to dedicate to it (i.e. quite good when you’re unpacking cases and making the washing machine work overtime). The squash is roasted in the oven with a little oil and garlic until tender, then mixed up with cheese and flour to make the dough. What was a sheer delight when making the dough was the colour – somewhere between the deep orange of the squash flesh and the sort of vibrant yellow you get from using saffron. My picture doesn’t really do it justice, but it is very firmly on the jaunty side of things. 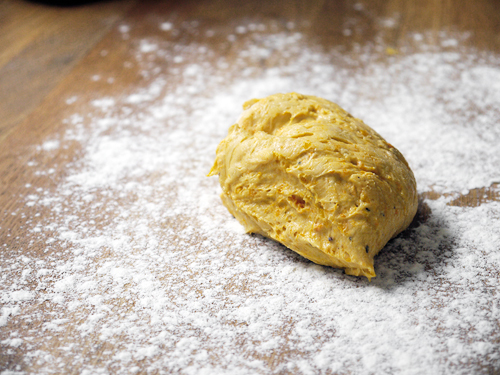 One realisation I had in making this is that while you want the squash to be soft, you also want it to be on the dry side. I would therefore avoid steaming (which will get you a soft texture, but increases the moisture in the dough) and instead opt for roasting. Pop the squash pieces in a dish, mix with a little olive oil, add some garlic, then cover in tin foil and bake until tender, before uncovering and allowing the edges of the squash to caramelise. This imparts flavour, and keeps moisture levels down. The result? You need less flour in the gnocchi.

I actually made this gnocchi in two batches – one for pictures and a quick bite to eat after my travels, and another the next day for lunch (yup, I’d taken an extra day off to get over the jet lag). The first attempt was based on making large gnocchi. Or at least, these were my attempt at normal-sized gnocchi, they just turned out slightly larger. I had them with a little butter, black pepper, nutmeg and pecorino cheese. While they might look a little large on the place, they were very tasty, with a clear flavour of squash. 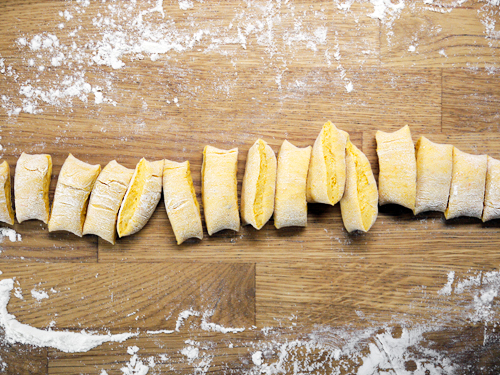 For the second version, I rolled the dough into very thing strands, and cut out what were really tiny gnocchi (the side of peanut M&Ms). They looked very pretty when cooked, piled up on the plate, but this time I made a change when serving them. I added only a tiny knob of butter, and instead used a dash of pumpkin oil to impact a rich toasted flavour to the dish. This combination was, frankly, sensational, giving two very different pumpkin flavours in the same dish.

So here you have it – squash gnocchi, made with butternut squash and goat cheese. Now all I need to get hold of is one of those proper little gnocchi rollers to get the ridges right!

1. Heat the oven to 200°C (390°F). Place the squash pieces in an ovenproof dish. Add the olive oil and garlic cloves, and mix. Cover with tin foil, and roast until tender (at least 30 minutes). Once ready, remove the tin foil and continue to roast until the edges of the squash are just starting to brown and caramelise. Remove from the oven and allow to cool – if the squash seems watery, reduce the heat to 150°C (200°F) and cook uncovered for another 5 minutes, then check again.

2. Put the cooled squash into a bowl (make sure to peel the garlic and discard the skin). Mash, then add the goat cheese, egg and pecorino cheese. Add enough flour to make a soft dough – it will still be quite sticky, so be careful not to over-work. Try to keep your hands and surfaces well-floured to prevent sticking, rather than adding more and more flour to the dough.

3. On a floured surface, roll out the dough into strands, then cut into pieces. You’ve made the gnocchi!

4. To cook the gnocchi, bring a pan of salted water to the boil. In the meantime, melt a knob of butter in a saucepan, and pour into a serving dish. Once the water is boiling, drop the gnocchi into the water. They are done when they float (around 2-3 minutes). As the gnocchi reach the surface, remove with a slotted spoon and place into the serving dish. Serve immediately.

To serve, add the sauce of your choice. I like to coat them in butter, add a little nutmeg and black pepper, and top with pecorino. If you have pumpkin oil, try adding a dash of that too.

Worth making? Easy? Yes. Quick? Not especially, but these are fun to make and delicious solid fare for cold days, so overall, worth the effort.