I’m a mega fan of a good cinnamon bun (as well as their cardamom cousins). But much as I love to make buns using yeasted dough, but there is one problem – these are recipes that taste great when they’re fresh, but if you need to allow several hours of proving time to get a nice, puffy dough, then it’s not really compatible with the idea of a lie-in at the weekend when you want to munch on cinnamon buns for breakfast. So what can you do?

I’m aware that some folk have mastered the technique of slow-rising the dough overnight in the fridge. I’ve tried it in the past, but with less than stellar results, so it’s something I still have to perfect. In the meantime, I’ve come up with a solution (of sorts). The technique is pretty much identical to the “traditional” method, but uses baking powder in place of yeast. This means that you don’t need to leave the dough to rise, and can get them done is less than an hour. It also means the recipe is foolproof, and you still get a decent amount of lift, and in the case of one bun, a rather spectacular amount!

So, how do they compare to the buns made with yeast? In fairness, this baking powder version is not quite as as light and fluffy, but I think that this is a reasonable trade-off when you need to whip up a batch in a bit of a hurry. However, they do look good and you’ve got my word that they still taste utterly delicious. That, and you get those extra hours in bed at the weekend rather than having to get up at 6am to prepare a fresh batch… 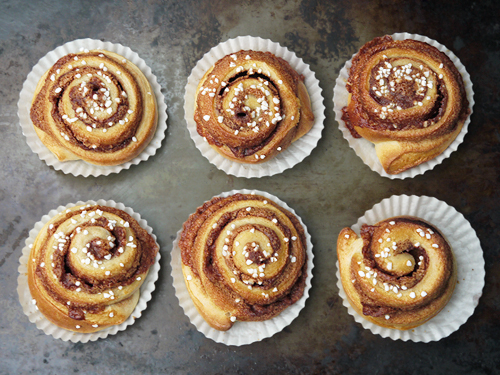 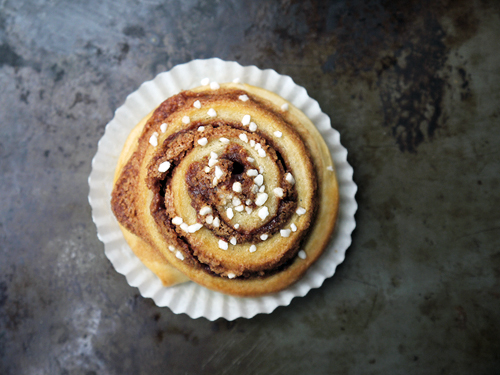 2. In a saucepan, bring the milk to the boil. Take off the heat, add the butter, then leave until the butter has melted and the mixture is lukewarm.

3. Make the filling – beat the sugar until soft, then add the sugar and cinnamon. Mix until very soft and smooth. It should be easily spreadable.

5. Put the flour, sugar, salt, cardamom and baking powder into a bowl. Mix, then sieve well. Add the milk mixture and half of the egg, and mix to a soft dough. If needed, add more flour, and knead lightly until you have an elastic dough.

6. Turn the dough onto a floured surface. Roll into a large rectangle until the dough is about 1/2 cm (1/4 inch) thick. Spread with the filling, then roll up into a sausage. Cut into 12 slices with a sharp knife, and lay each piece, cut face up, on a bun case.

7. Take the remaining egg (remember that?) and mix with a tablespoon of water. Brush the buns with the egg wash and sprinkle with pearl sugar. Bake the buns for about 12 minutes until puffed up and golden.