I’m a great believer in having a few recipes up my sleeve to produce at short notice. And this is one of them. Pillowy coconut macaroons, finished with dark chocolate. 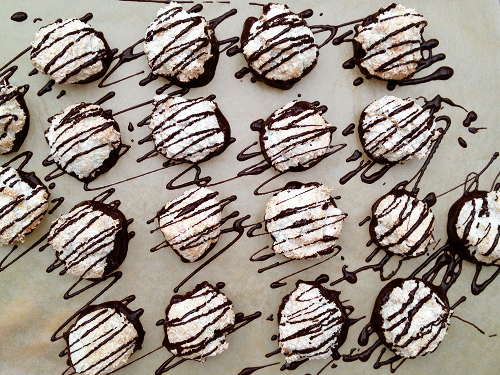 If you have tried making French macarons, chances are that you’ll know that they can be time-consuming and very fickle – there is a lot that can go wrong, so making them is a technique the requires precision, patience and practice.

British macaroons, made with coconut, are an altogether different beast. They are much easier to make, and part of their charm is their more “rustic” appearance. Not for them the smooth shells of their French cousins. They share a slightly crisp surface, that’s true, but underneath they have a soft, fluffy centre that is a little like a home-made Bounty bar. With that in mind, I decided to make these little guys, and finish them off by dipping the bottom in dark chocolate, and drizzling more chocolate on the top. The result was absolutely delicious and they have a great visual impact too. I took them along to a birthday party, and they seemed to vanish in a shot. Children and adults were seen sneaking off with two or three at a time, which I take as a compliment.

I mentioned these are easy to make – the mixture can be made, chilled and baked in an hour, and the dipping in chocolate only takes around fifteen minutes, so they can be easily made in the morning and on a plate to serve to guests in the afternoon. The only question is – how many is too many?

1. Place the coconut, icing sugar and flour in a dish. Mix well and set aside.

2. In a metal bowl, whip the egg whites, salt and cream of tartar until frothy. Add the sugar, and place the bowl above a pan of barely-simmering water. Whisk constantly until the egg whites form a white, glossy mass that leaves stiff peaks when you remove the beater (around 5 minutes). This can be done by hand but is easier with an electric whisk.

3. Remove from the pan of water, and stir the vanilla into the meringue mixture. Add the coconut mixture, and fold in gently.

4, Cover and leave in the fridge to chill for 20 minutes. At this stage, preheat the oven to 170°C (335°F) and line a baking tray with greaseproof paper.

5. Bake for 15 minutes until slightly puffed and lightly golden. Remove from the oven and allow to cool.

6. Melt the chocolate over a pan of barely-simmering water. Dip the bottom of each macaroon into the chocolate, and place on greaseproof paper to set. Once you have dipped all the cookies, use the remaining chocolate to drizzle in a zig-zag pattern.

Worth making? These are sensational – if you like Bounty bars, you’ll love them. As they don’t contain too much sugar, they’re not overly-sweet, and the texture if very light. You can skip the chocolate, but the dark, bitter flavour balances the sweet coconut beautifully.

16 responses to “Chocolate and Coconut Macaroons”