If you’re in London right now or have visited recently, it may come as something of a shock to learn that it is midsummer. Sure, we’ve had a few warm days, but the skies are still leaden, with oppressive dark clouds threatening rain at the drop of a hat. However, the threat of bad weather on a summer’s day is never enough to stop us enjoying the Great British Summer – I’ve just spent the day at a garden party in Primrose Hill where we spend most of the day rushing between the house and the garden depending on whether the rain was falling or some rays of sunshine could be spotted.

Given the state of the weather, midsummer is not a huge event in Britain, but in honour of this point in the year, I’ve made cardamom twists as a nod to our Scandinavian cousins, for whom the middle of the summer season is a very big deal indeed. And when you have warm, sunny days by the sea with little (or no!) night like the do in Sweden, Norway and Finland, you can understand why.

This is a variation on my recipe for cardamom buns, but rather than rolling the dough into a sausage and slicing it, you cut it into strips, twist and form into a bun, then hope for the best as the yeast gets going and they expand into all manner of strange shapes. Not one for those obsessed with getting even-looking buns, but I think they’re pretty fun to make and eat. 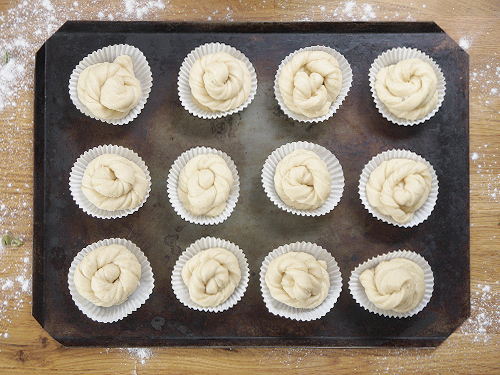 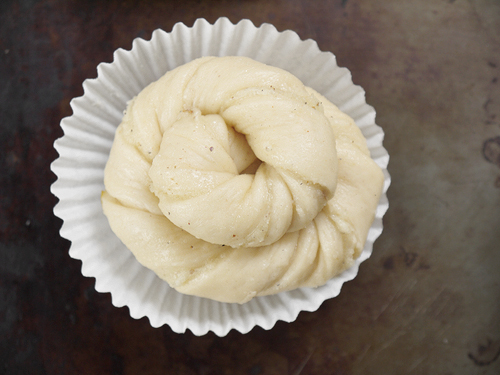 2(a). If using a bread machine: put one portion of the egg and the rest of the ingredients into the mixing bowl. Run the “dough” cycle. Simples!

2(b). If making by hand: put the flour and butter into a bowl, and rub with your fingers until the butter has been incorporated. Fold in the salt, sugar, nutmeg/mace and yeast. In a separate bowl, combine the milk and one portion of the egg, then pour into the dry ingredients. Stir with a spoon, then work with your hands until you have a smooth, stretchy, silky dough (at least 5 minutes). Leave the dough a warm place for an hour until the dough has doubled in size. Knock back and knead again for 2-3 minutes.

3. Once the dough is ready, turn it onto a floured surface. Roll into a very large rectangle getting the dough as thin as you can. Make the filling by mixing all the ingredients until smooth, then spread across the dough. Fold the dough in half. Use a sharp knife to cut into 12 strips.

4. Take each strip and start twisting the edges in opposite directions until you have a spiral. Form into a coil, tucking the ends underneath, and place on a bun case. Cover with cling film or a damp tea cloth and leave to rise for at least an hour until doubled in size.

5. Preheat the oven to 200°C. Take the remaining egg (remember that?) and mix with a tablespoon of water. Brush the buns with the egg wash and sprinkle with pearl sugar. Bake the buns for about 10-12 minutes until golden.

6. When done, remove from the oven and cover with a clean tea-towel (this will catch the steam and keep the buns soft).

Worth making? These buns are amazing. It’s a very unusual flavour in terms of baked goods, so it’s nice to have something different. They’re buttery, zesty and fragrant. They also last for a few days if stored in a sealed container, so can see you through several breakfasts, mid-morning snacks and afternoon treats.