I’ve managed to get myself a new hobby. It started oh-so-innocently when I made a batch of sloe gin two years ago with berries that I got hold of from the local park. The result? Quite simply stunning. It is just so ridiculously easy to leave fruit soaking in some sort of spirit, and come back months later to something magical.

Roll forward two years, and now I have not only two jars of sloe gin maturing in the cupboard, but various other concoctions steeping at the back of a cupboard. I promise that these will appear over time, but today’s little feature is one that I am particularly looking forward to.

First off, I have to ’fess up to the fact that this is a complete lift-and-shift from a recent cookbook acquisition of mine, the fantastic Salt Sugar Smoke by Diana Henry. If you’re into preserving things at home, this is definitely a book for you! It has wonderful photography that takes you through the world of jams and jellies, pickles, smoking, salt preserving and how to make a range of fruit liqueurs.

This autumnal recipe in particular really caught my eye – you just take a whole pear, pop it into a large jar, add a few spices and some orange peel, and leave the lot to steep for a few months. 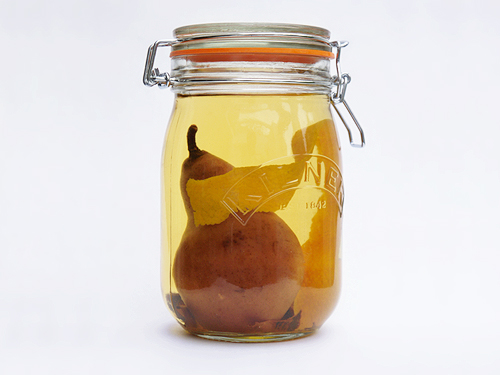 Now, I was a little unsure about this “whole pear” approach (surely I should be slicing the thing to get all the flavour out?) but sure enough after a few days, the pear skin splits and I’m imagining all the flavour mixing with the spirit. The mixture has already taken on a slightly orange hue, but the hard part is waiting for nature to take its course. The pear and spices need to sit for a month before the sugar goes in, and then the whole lot needs to site for another four months to mature. All this means that some time in February 2014 I should be able to enjoy this liqueur. That, or I might just sneak the stuff out from the cellar in time for Christmas….we’ll just have to wait and see how patient I can be!

1. Pop the pear (unpeeled) into a large jar with the cinnamon, nutmeg and orange zest. Add the vodka. Seal the jar, and leave on a kitchen window for a month. Admire it from time to time as the alcohol takes on the colours (and hopefully flavours) of the fruit and spices.

2. Add the sugar and re-seal the jar. Shake lightly, then store somewhere dark. Shake every day for a week until the sugar is dissolved. Leave for at least four months before tasting.

Worth making? We’ll find out in a few months…