Today’s festive offering comes courtesy of the Netherlands, which is usually a pretty good bet when it comes to Christmas goodies, such as speculaas (spiced biscuits) and kerstkransjes (almond Christmas wreaths). These are the mysteriously-named Janhagel which are a buttery, cinnamon-flavoured base topped with toasted almonds and pearl sugar.

I’ve picked this one as tomorrow is Sinterklaas in the Netherlands (although, while the Dutch do it on 5 December, their Belgian neighbours confusingly celebrate it on 6 December. As these cookies are Dutch, we’ll go with the earlier date). This is the day on which St Nicholas (or Sinterklaas, the origin of the name Santa Claus) is said to come from Turkey to distribute gifts and sweets to children by leaving them in clogs, or these days, more modern types of shoe. Alongside presents, it is traditional to get a chocoladeletter (your initial in chocolate!) as well as pepernoten and kruidnoten (spicy little biscuits).

So…these biscuits. They are super-easy to make. Just mix a whole lot of stuff together, sprinkle on the almonds and sugar, and you’re pretty much there. Unlike so many Christmas goodies, you can make these from things in the cupboard and fridge, which is good if you need to whip them up in a hurry. The flavour is fairly simple, just the goodness of butter, sugar, cinnamon and toasted almonds, which does make a nice difference from some of the spice-heavy biscuits and cakes you encounter at this time of the year. However, the name is a bit more of a mystery. They are sometimes spelled as Janhagel, other times as Jan Hagel, which suggests it might have been named after some guy named Jan, with the hagel referring the sugar on top (called hagelsuiker in Dutch). However, this sugary link  is more likely than not a bit of retrofitting a theory to the name. If you’re an expert in Dutch biscuits and you know where the name comes from, do tell! 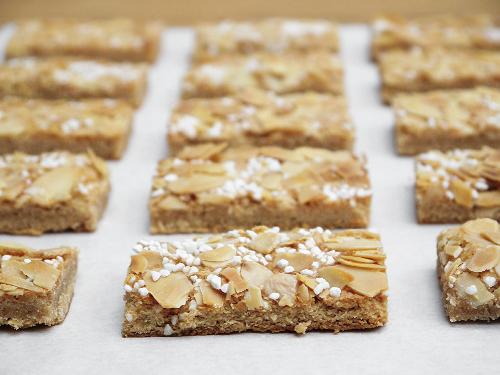 Now, a few tips for making this. You make these biscuits as one large sheet, then cut into fingers when it is baked. It is worth letting the sheet cool a little, as cutting too soon will mean they fall apart. You should also use a sharp, serrated knife and gentle pressure so that you can get a sharp cut. I tried a straight knife, and it just pressed down on the almonds, leaving messy edges. And…you can get a bit too fussy by using a metal ruler to line everything up, but it would take a special kind of neurotic to get that obsessed…right?

1. In a large bowl, mix and sieve the flour, baking powder, salt and cinnamon. Set aside.

2. Put the butter and sugar in another bowl and beat until light and fluffy. Add the flour mixture and half of the egg, then mix until you have a smooth dough. Try to do this with a wooden spoon rather than your hands (they will melt the butter and make the mixture greasy). Cover the bowl and leave in the fridge to chill for an hour.

4. Place the dough onto the tray. Shape into a rough square, then cover with another sheet of greaseproof paper and use a rolling pin to roll out to around 1/2 cm thickness. The size of the square should be just over 25 x 25 cm (10 x 10 inches). Remove the top layer of paper.

6. Bake for 20 minutes until puffed and the nuts are golden. Remove from the oven, allow to cool for a moment. Gently trim the edges, then cut into bars using a sharp serrated knife. Aim for around 4 x 8 cm.

Worth making? This is a very quick and easy recipe, and doesn’t need anything too fancy to produce great cookies. You could also make them with different spices according to taste.