Merry Christmas to everyone! Here is the final instalment of my 2013 festive baking marathon. I had intended to get them all done by Christmas Eve, but the social whirl, preparing for Christmas day and need to spend a fair amount of time in the garden tidying up after storm damage meant that I didn’t quite hit that target. However, we are still in the limbo period between Christmas and New Year, so at least this offers an easy little recipe to have a go at when you’ve had your fill of Disney films and chocolates.

Last year I made some mince pies to round of the baking madness, so this year I’ve done a bit of a variation on a theme. However, I understand that mincemeat can be a bit of an acquired taste, so instead I’ve made some miniature versions of a Scottish classic, the Ecclefechan Butter Tart, which also have lots of fruit and nuts in them, but rather than the spices, they are enriched with a thick mixture of butter, brown sugar and egg. This is all mixed together and baked, so it puffs up a little on the surface, while inside it is soft, moist and sticky. Ideal as an easy alternative if you have guests coming who just can’t get into mincemeat tarts. 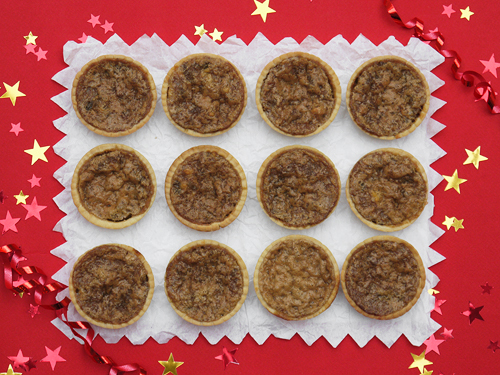 While it is tradition to use dried fruits like currants and sultanas, plus glacé cherries, walnuts and citrus peel, you can play around quite a bit with the filling. For example, brown sugar is traditional in the filling (giving a slight toffee note), you can easily use white sugar if you want a lighter filling so that other ingredients are not overpowered. Rather than lots of currants and sultanas, you could opt instead for mostly candied orange peel for a more citrussy affair (perhaps a little like that other Scottish delight, the Edinburgh Tart). By that stage, you’re probably getting rather far from a true Ecclefechan tart (and it would be a shame to have to forgo the highly amusing name when presenting to guests), but go with what you like.

I think it is important to get the pastry as thin as you can. I rolled it out, then pressed it in a buttered muffin tray to get it very thin. When you make them with these proportions, you might think there is not that much filling and feel they look a bit mean. All well and good, but the filling is very rich, so if you make them too big, you’ll probably struggle to eat even one of them. Just keep this in mind if you are tempted to double the quantities!

When serving these tarts, they are great at room temperature, but I’m sure you could warm them slightly. I’ve left mine plan, but you can finish with a little water icing, or a sprinkling of icing sugar for a more festive look.

You might also recognise this tart from a previous post. Yes, I’ve made this before as a large tart to be served by the slice, so if you want something grander for a party, then that’s also an option.

So…there we have it! The Twelve Festive Bakes of Christmas for 2013! I hope you’re enjoyed these recipes and they’ve given you a little bit of inspiration.

1. In a bowl, rub the butter into the flour. Once the mixture resembles breadcrumbs, add the sugar and mix well.

2. Add the egg yolk and just enough cold water so the mixture comes together (1-2 tablespoons of water is probably enough). Cover the pastry in cling film and leave to rest in the fridge for at least 30 minutes.

3. Grease a non-stick muffin tray with butter. Roll out the pastry very thinly and use a circular cutter to make discs to put in the tray holes. Use your fingers to press down the pastry, pushing it up the sides to make it as thin as possible. Spike the bottoms with a fork, and pop the tray into the fridge to chill while you make the filling.

2. In a bowl, combine the sugar, butter and eggs. Stir in the vinegar, walnuts, dried fruit and cherries. Divide among the 12 pastry cases.

3. Bake the tarts for 12-15 minutes until the pastry is golden and the filling is slightly puffy and lightly browned in the centre (turn the tarts during baking).

Worth making? Absolutely. This is a very simple, yet rich, alternative to mincemeat pies at this time of year, so idea for those that don’t like (or want a change from) all that spice.