So, lads and lassies, did you see all that? We’ve had over a week of sporting action from the 2014 Commonwealth Games in Glasgow. The opening ceremony was of course a festival of almost every cliché you could imagine – tartan, glens, bagpipes, Scottie dogs, the Loch Ness Monster and a few dancing Tunnocks teacakes – and all of that was brilliant. I went up there for a few days, and the mood in the city was amazing. Friendly people and crowds cheering the athletes. Glasgow did itself and Scotland proud!

Just to finish off the celebration of all things Caledonian, here are a few Scottish recipes that I’ve tackled over the years from those of you that have been watching from further afield and who want to keep the celtic mood going, and perhaps experience some of the flavours of Scotland. Sadly, I don’t have recipe for Scotland’s second national drink, Irn-Bru, that I can share with you. I’ll leave that gastronomical experience for when you’re able to visit…

Macaroon bars. For me, these are one of the most Scottish things you could make. The centre is a simple fondant made from icing sugar and, rather bizarrely, mashed potato! They’re then dipped in chocolate and rolled in toasted coconut to provide a very calorific treat. Go for a long run after eating.

Shortbread. This is often seen as the “jewel in the crown” of Scotland’s rich baking tradition. It is amazing that this simple combination of butter, flour and sugar can turn into something so delicious and it has been responsible for millions of boxes festooned in tartan, Scottie dogs and thistles.

Oatcakes. As a healthy counter to those sugar-heavy macaroon bars, oatcakes are another of Scottish baking’s gems. They’re ridiculously simple, just oats, flour, water and salt, but they’re delicious on their own or with good, sharp Scottish cheese.

Ecclefechan Butter Tart. This one is worth making for the name alone! It originates in the town of Ecclefechan near the border with England, and consists of nuts and dried fruit in a rich filling made with butter and brown sugar. It’s a little bit like Canadian Butter Tarts…I wonder if there is some link there?

Clapshot. Another simple dish but one which is utterly delicious, believe me. Not much more than potato and neeps (aka turnips, or what the rest of the world calls swede…), mashed up with butter, salt, pepper and sprinkled with chives. This one originates from Orkney.

Atholl Brose. This is the grand name that is given to an oat milk that is mixed with cream, heather honey and whisky to provide a celebratory tipple that was said to have been a favourite of Queen Victoria.

Cranachan. Scotland is a big soft fruit producer, and cranachan is a great way to make the most of Scottish raspberries. This is a lovely mixture of toasted oats, softly whipped cream with a dash of whisky and honey, and fresh berries that is the essence of summer. A more sophisticated alternative to Eton Mess! 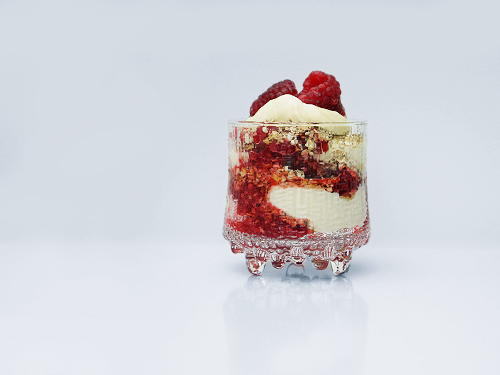 Rock Buns. A tea shop staple that I remember from the 1980s – simply fruit buns with a dash of spice. Named after their slightly rustic (rock-like) appearance.

Empire Biscuits. More tooth-attacking sweetness! These are two buttery biscuits, filled with jam and topped with glacé icing. Originally known as German biscuits, the name was changed to something more patriotic.

Smiddy Dumpling. Alright, this is perhaps one that is not so widely known, but it nicely showcases the various dark teabreads you might see in Scotland. I got this one from a friend’s mum who lives on the Black Isle, to the north of Inverness. An easy loaf cake to knock up if you don’t fancy getting to grips with boiling the more famous Clootie Dumpling (in an old dish cloth, or cloot, of all things!).

Tattie Scones. A great breakfast favourite – mashed potatoes and flour, cooked dry in a frying pan and then yours to scoff either covered in butter and jam, or as part of a cooked breakfast. Incidentally, these were being served in a bun at the Commonwealth Games…perhaps a bit of a starch overload there?