I think every cook has a few technically complex things that they aspire to be able to make really well. In my case, it’s a pretty long list (I’ve got a thing for mastering tricky techniques) but I would love to be really, really good at making sweets. Fudge, caramels, chocolates…for all the artistry involved in making them, they also contain a decent amount of science, as too much mixing (or not enough), or being a degree or two above or below the right temperature can ruin you sweets or change them completely. When I was growing up, we had a “Candy Cookbook” with recipes for making fondant, then dozens and dozens of recipes to make with that fondant. Needless to say, my poor mother suffered years of sugary mess in the kitchen which yielded inedible results with tedious regularity.

For this reason, I’m always rather happy to make something that is easy and has pretty much guaranteed success attached to it, and brigadeiros tick that box. They originate in Brazil, and I would describe them as chocolate caramel truffles. They are also dead simple, as they are made from just butter, cocoa and condensed milk. I’ve also added a pinch of salt, both to get just a hint of that salted caramel vibe going, but also to cut through the sweetness of all that condensed milk. 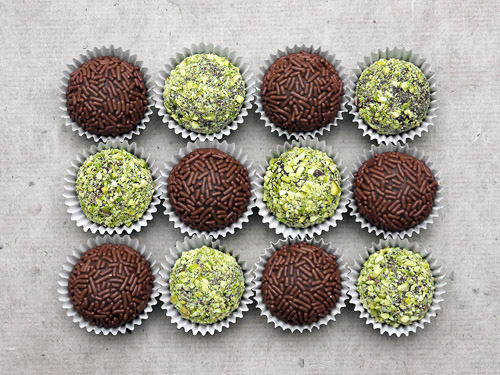 These little chocolate treats were said to have been created in Rio de Janeiro in the 1940s by supporters of Brigadier Eduardo Gomes, who was running for the Presidency of Brazil. Their slogan was “vote no Brigadeiro que é bonito e é solteiro”, which translates as “vote for the Brigadier, who is handsome and single”. Unfortunately for him, the power of confectionery was not enough, and he ended the campaign handsome, single and not the President. However, his name lives on in the form of these little bonbons which are a perennial favourite at parties in Brazil.

Actually making brigadeiros was a complete breeze. Just melt the butter, mix in the cocoa until smooth, then add the condensed milk. Keep stirring over a low flame until the mixture comes away from the sides of the pan. If things seem to be getting a little lumpy, just beat vigorously with a whisk until smooth. No worrying about setting points, whether things have been tempered or how to encourage the “right” sort of crystals to form. Just beat, boil, cool, roll! This is sweet making for the impatient, and suited me perfectly.

The traditional coating is to roll them in chocolate vermicelli sprinkles, but there are other options too. I’ve also used some finely chopped pistachios, and coconut would also look rather good with the white flakes contrasting with the dark cocoa interior.

Finally, a little advice – you can make the filling ahead of time (e.g. the night before) and then roll the truffles in chocolate sprinkles just before serving. However, be careful about making them too long before you intend to eat them – as the ingredients are fairly simple, they will dry out after a couple of days, so you won’t have that lovely smooth texture. You could play around with the recipe and start adding glucose syrup and such like, but I recommend keeping things simple and just making them a little bit before you want to serve them.

1. Lightly grease the bottom of a dish and place to one side.

2. In a small saucepan, melt the butter. Mix in the cocoa and condensed milk. Keep stirring over a gentle heat until the mixture looks thick and comes away from the sides of the pan (around 10 minutes). Pour the mixture into the buttered dish, cover with cling film, and leave to cool completely.

3. Take walnut-sized pieces of the mixture and roll into balls between your hands. Roll in the topping of your choice and put into miniature cake cases.

Worth making? Considering how ridiculously easy these are to make, they are really delicious. This is a great idea for kids to make, as they look great on a plate, and you can add all manner of toppings.