Each year, reaching my sixth post is something of a relief – we’ve made it to the half-way point without the kitchen catching fire or being destroyed by scalding molten sugar and burning butter. It feels like we’re on the home stretch, even if it means I’ve got to produce another six bakes to complete the series. Every time I do this challenge, I really enjoy it, but baking against a (self imposed) deadline of Christmas Eve does sap a little of the fun out of the process. And then we do it again the next year…

To celebrate getting this far, I’ve made a celebratory cake. Kransekager hail from Denmark, as well as Norway where they go by the radically different moniker of…eh…kransekake. They are made from a mixture of ground almonds, sugar and egg whites, which is mixed into a marzipan-like dough, and then baked until golden. The result is a slightly crisp exterior, with a soft, chewy centre, and they are utterly delicious. They also happen to be gluten-free if that’s your thing.

The impressive way to make them is by shaping the dough into ever-smaller rings (krans means wreath), then drizzling each layer with white icing to build a tall conical tower that can hide a bottle of champagne. These cakes are popular at Danish weddings, and in Norway on national day on 17 May. I’ve seen some suggestions from Danes that kransekager should be eaten at midnight on New Year’s Eve with champagne. I’m not a massive fan of champagne with very sweet things, so I’ll leave that one to you. To each their own! 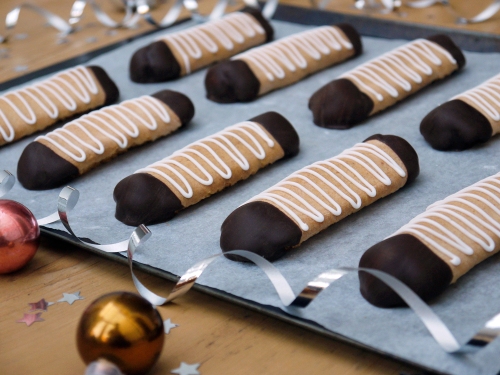 There is also a variation on the kransekage tower. Rather than a cone which rises into the air, the rings can be arranged into an overflødighedshorn (say that after a few glasses of champagne!) which means “horn of plenty” or “cornucopia”. This can then be filled with sweets and chocolates, for a truly dazzling showstopper. If you’re looking for a way to serve all your Christmas baking in a memorable way, then this might be the way to do it. Perhaps I’ll have a go at that next year.

All these fancy cakes are great when you’ve got the time, but as you can see, I’ve avoided the elaborate cake tower and a fantastical horn of plenty, and instead made a simple bar form, with either end dipped in dark chocolate. 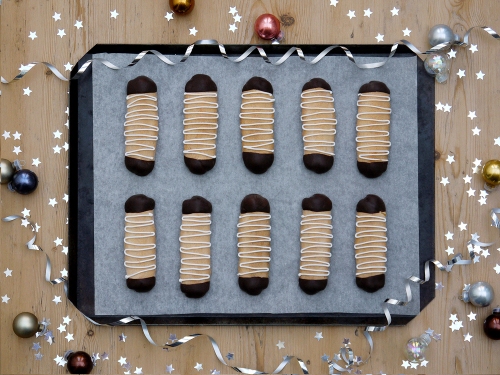 I have found a few Danish versions online which all suggest using marzipan, sugar and egg white. However I’ve learned the hard way that what we call marzipan in Britain has quite a high proportion of sugar to nuts (usually a 3:1 ratio, rather than the 1:1 in Danish “raw” marzipan). The result in the past has been that I’ve ended up making things that were so sweet they were inedible! No worries about that here – I’ve made this using equal parts of ground almonds and icing sugar to get the perfect balance. I’ve also added a little bit of almond extract for that distinctive flavour. I love it, and a little really enhances the kransekager, but if you want to leave it out you can. 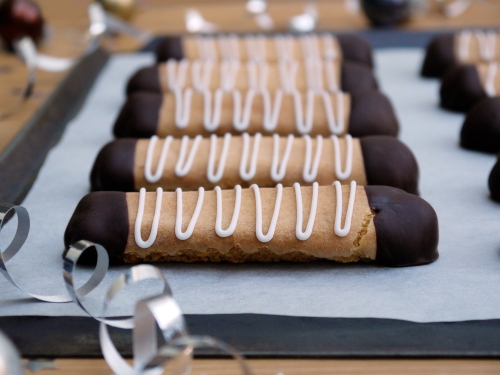 These were really easy to make – the dough comes together easily, and it straightforward to shape. I opted for some long batons – you just measure out the dough, roll it into a ball, then roll into a long sausage. I’ve finished them with traditional white royal icing, but I dipped the ends into dark chocolate  – this provides a flavour contrast to the sweetness, but it also tidied up the messy ends after I’d baked them. I was originally going to leave them with just the icing, but I picked up the chocolate tip from Gitte at My Danish Kitchen. If you’re interested in finding more Danish recipes, her blog is great and there are so many recipes on there – it it’s Danish, I think Gitte has made it at some point!

For the marzipan dough

1. Preheat the oven to 180°C (355°F). Line a baking tray with greaseproof paper, and rub the paper with a dot of butter to prevent sticking.

2. Lightly beat the egg, then add the ground almonds, icing sugar and almond extract. Mix to form a soft dough (start with a fork, then finish with your hands).

3. Divide the mixture into 10 pieces. Dust a worktop with icing sugar. Form each piece into a ball, then roll each one into a sausage, around 9cm long. Press the sides so that you have a long triangle. Transfer to the baking sheet, leaving space between each for the kransekager to expand slightly.

4. Bake the kransekager for around 13-15 minutes until just golden, turning half way for an even bake. Remove from the oven and leave to cool.

5. If dipping in chocolate: temper the chocolate, then dip either end of the batons in the chocolate. Transfer to a sheet of greaseproof paper and leave to set.

6. Make the icing – briefly whisk the egg white, then add the icing sugar and lemon juice. Beat until smooth but stiff – add more icing sugar is needed. Transfer to a piping bag and drizzle a zigzag shape on top of the kransekager. Leave to set.