I’ve made some rather elaborate things in the last couple of weeks, so today I’ve turned my hand to something easy. If you’re looking to amuse some small kitchen helpers with limited attention spans, then this might be one to try.

These little biscuits are called hallongrottor, a Swedish bake which means “raspberry cave”. I guess they are a type of thumbprint cookie, but with just about the cutest name possible. I realised that I’ve ticked off Norway, Denmark and Finland already this year, so it only seems fair to make something from Sweden. 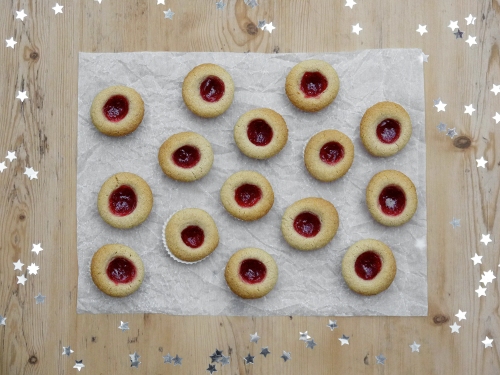 Making these little guys is a complete breeze. You just need to work with some very soft butter, and whip it until it is super-soft. Add icing sugar and beat some more, then add your flavourings and beat some more. You could make this by hand with a whisk and lots of elbow grease, but your arms will thank you for using an electric beater. One for the Christmas list if you don’t already have one!

Finally, you work in the flour, then roll the dough into balls. To get them more or less the same size, I rolled this out on a worktop into a long sausage, then cut into equally sized pieces. How equal? I used my precision Japanese steel ruler. Every piece was two centimetres exactly. Sounds nerdy, but it will get you pretty good even sizes without the faff of weighing each piece. 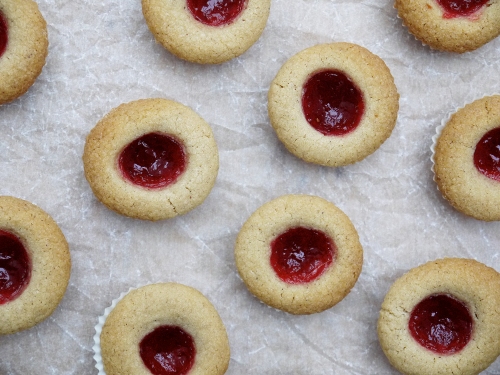 To finish them off, you then roll them into balls, then make a dent for the jam. I tried various kitchen implements, but by far the easiest way was to bend my index finger, and poke the middle “bony bit” into the top. You may want to use clean hands for that part…and then just pop your jam of choice into the dent. I tried using a small teaspoon and it was a complete mess. Use a piping bag, and beat the jam until soft before trying to pipe it in. I didn’t do this at first, and so the nozzle of my piping bag got blocked, then lots squirted out when I squeezed hard, so be careful!

I actually made two versions of these – one using just plain flour, and one using a about one-fifth cornflour. It is definitely worth using the cornflour – the texture is lighter and more crumbly – so that’s the recipe I have included below. 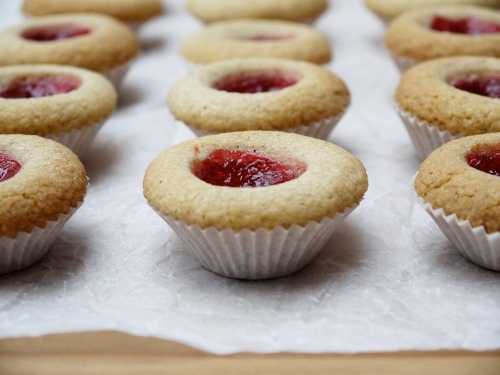 2. Put the butter in a bowl and beat until very soft. Add the icing sugar, baking powder, vanilla and cinnamon, and beat well until fluffy. Add the flour and cornflour, and mix well. Put the bowl in the fridge for 10 minutes.

3. Remove the dough from the bowl, roll into a long sausage and cut into 15 pieces. I roll it out to 30 cm long, and cut into 2cm chunks – this gets roughly equal sizes.

4. Roll each piece into a ball, then put into a paper case. Make an indentation in the top, and fill with a little jam.

5. Bake for 10 minutes until golden, turning half way to get an even bake.