Every Christmas selection has a place for a good old-fashioned buttery biscuit. Stepping up to the role is today’s recipe from Norway. These twisty bakes go by the name Berlinerkranser, or “Berlin wreaths”. Completely logical for a cookies from, eh, not Berlin. 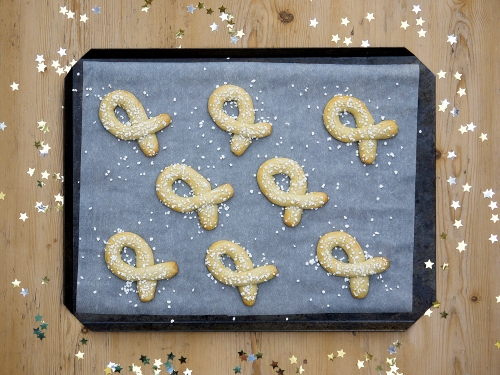 I mean, it’s not as if a Norwegian city name would do. Oslokranser? Bergenkranser? Trondheimkranser? Lillehammerkranser? Tromsøkranser? Really, would none of these have worked? Alas I have not found the origin of the name, but I wonder if the knot shape refers back to German pretzels? If you know, do enlighten me!

It can be very easy to think of butter cookies as not being very interesting. But as with many traditional recipes, it helps to think about where and when they came from. Think back to the late 1800s, and butter would have still been a luxury to some people. This would mean that at Christmas it really was a treat to have something sweet and buttery, rather than something made with lard. Times were hard back then, folks. 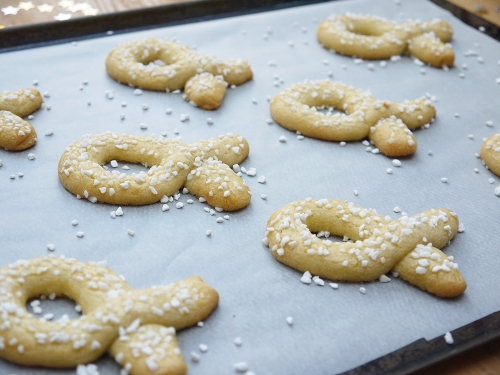 Berlinerkranser sometimes make an appearance as part of the Norwegian tradition of syv slags kaker (seven sort of cookies, say that quickly after seven glasses of eggnog), where bakers can get into the competitive spirit of the season. They try to dazzle their guests with their baking skills by filling every biscuit tin in the house with cookies. If you want to have a go at a few other Norwegian treats, you could also turn your hand to serinakaker and sirupsnipper.

There is also an odd feature to Berlinerkranser, or at least something that I’ve never seen in a cookie recipe. Just about every version I’ve seen uses fresh egg yolks as well as hard-boiled egg yolks in the dough. I’m normally happy to try anything, but this one struck me as just a bit too strange. It’s also more work…I’m all for a lazy approach that skips avoidable faffing about…all the more time to watch a schmaltzy festive made-for-TV afternoon movie, probably involving some scrooge-like character in New York who rediscovers the magic of Christmas from the innocence of a young child. So, in a testament to laziness, my recipe uses two fresh egg yolks, but if you want to have a go at the more traditional version, use one fresh and one yolk from a boiled egg. 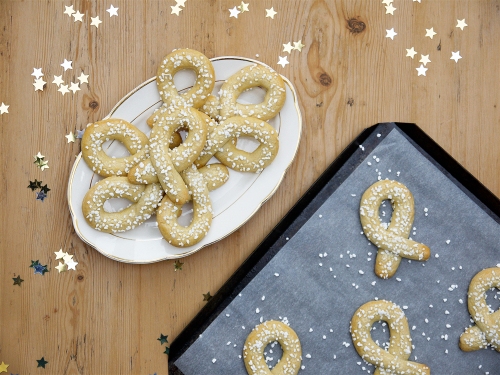 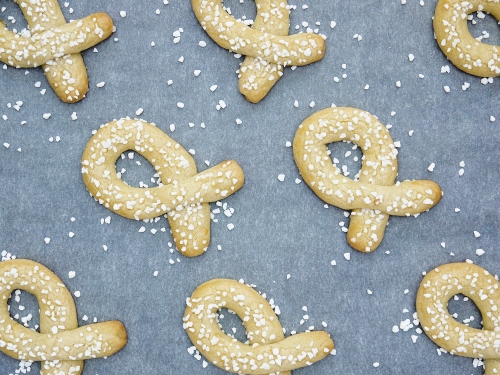 In terms of flavour, I have kept these very simple and traditional. I’ve seen recipes that add vanilla or citrus zest, but these have just the richness of egg yolks and butter. The only concession I’ve made is to use salted butter, as I think it gives a better and fuller flavour than using unsalted.

One tip for making them – once you start to shape the dough, it is easier to work as it gets slightly warmer and softer. If it is too cold, it will break. Howerver, soft dough will collapse in the oven, so put the whole tray of shaped cookies in the fridge for 15 minutes before putting straight in the oven. Voila – cookies don’t break and they keep their shape.

Now…go forth and make another six types of cookie before your guests arrive. Enjoy!

1a. If using a hard-boiled egg yolk: push the boiled yolk through a sieve to break it up as much as possible. Add to the other egg yolk and the sugar and beat well for a minute.

1b. If using only fresh yolks: put the yolks and sugar into a bowl and beat well for a minute.

2. Add the flour, mix, then tip in the butter and mix until it forms a soft dough. Add more flour if needed, but remember the dough will firm up when chilled.

3. Wrap the dough in cling film, flatten as best you can, and pop it in the fridge for 30 minutes.

5. Divide the dough into 20 pieces. Take each piece and roll to an 18-20cm rope, and shape the cookies. Place each one on a baking sheet.

6. Chill the shaped cookies for 15 minutes in the fridge, then brush with beaten egg white and sprinkle with pearl sugar.

7. Bake the cookies for around 12-14 minutes until pale golden.  turning the tray around during baking to get an even colour.