Today’s recipe is a departure from the world of Christmas cookies. It’s time for some festive sweets!

These are called vihreitä kuulia, which translates as “green marbles”. The idea to make these came from my Finnish colleague, who explained they are an intrinsic part of the festive period in Finland. They are fruit jellies made by the iconic Finnish chocolate company Fazer.

Never one to shy away from a challenge, I looked into them a bit more. They these are essentially pâte de fruit that is made in hemispherical moulds. Two pieces are put together to form a sphere, rolled in sugar and voila we have ourselves some green marbles. They looked pretty cool, so I thought I would have a go. The fact I needed to buy a new mould, glucose, pectin powder and tartaric acid? Pffff, easy!

The traditional flavour is pear, and in fact they used to be known by the name päärynäkuulat (“pear balls”). But…pear?…this presented a bit of a challenge. I wanted to stay authentic, but I didn’t want to use pear flavouring. If you’ve ever had pear drop sweets, you’ll know that really strong overpowering flavour and I wanted to avoid that. So what could I do? I bought a few comice pears, and let them get really, really, really ripe. They ended up really soft and fragrant, which seemed hopeful. In fact, they were so soft that peeling and coring them was a bit tricky, but it meant that they were very easy to purée. 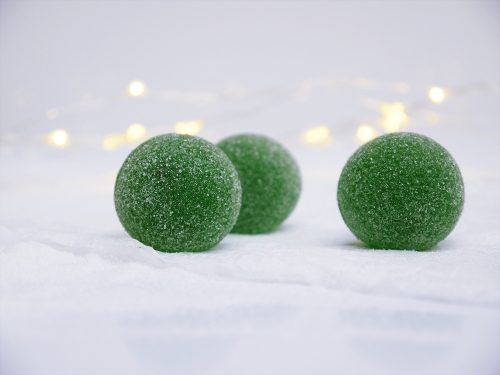 So I got my pear purée, but it quickly started to oxidise and go brown. I cooked it briefly to try and stabilise it, then let it cool. At this point, it was a pale brown colour, which left me thinking this was not going to work. But I persisted – I threw in the other ingredients and added a little green colouring. I would love to say that I’ve used something wonderfully natural, but I didn’t. It was a gel colouring, as I wanted to get a vibrant, intense green colour. I know, I know, a massive contradiction to be obsessed about the natural flavour and then achieve the green with some fakery! But look – no more brown, and we got the green marble look.

I boiled the lot, got to the magic 107°C, and added some tartaric acid to get the mixture to set, and a little spiced pear liqueur for a flavour boost. It was then a simple case of pouring the mixture carefully moulds, and the rest went into a lined pan to set so that I could cut it into squares like classic pate de fruit. I did have to work quickly, as the mixture started to gel really quickly – I just managed to pour 24 hemispheres, and by the time I poured the remainder into a tray, it was properly starting to set. I thought it would take longer for the pectin to start setting, so you really do need to have everything ready. Part of the dubious joy of pâte de fruit is working with pectin and all the science that goes with it, but it does mean these sweets are vegan, so a useful recipe to know if you’re trying to make jelly-type sweets that avoid gelatin. 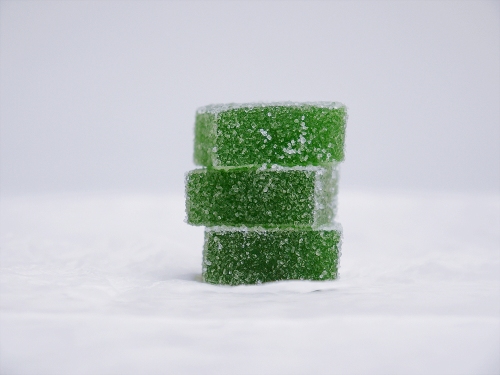 As you can see, this worked! The pear paste set to a very firm jelly which popped right out of the moulds. I then took two pieces, pressed them together, and rolled them in sugar. The result was a collection of really pretty green spheres. And the flavour? Yes, we got pear. We got natural pear! This worked better than I hoped, and I think part of the secret to success here is that the mixture was not cooked for any longer than was necessary. I probably spent only 5 minutes cooking it on the stove.

Now, I mentioned that this recipe did require me to buy a few specialist items. I had to find pectin powder, tartaric acid, glucose and a special silicone mould. Once I had amassed all these goodies, I was bitten by the pâte de fruit bug and decided to have a go at something else. I also saw that Fazer makes a range of these coloured fruit “marbles”. And I had a bowl of plums on the sideboard, so I decided to used the same technique to make my version of sugarplums, except I chopped the plums and cooked them with a little water until they were soft and pulpy, and added cinnamon and mixed spices to the mixture. I’ve made a traditional version before using a mixture of ground dried fruit and nuts flavoured with spices, but I liked the idea of a spiced plum candy, ruby-red and glittering with sugar crystals. As you can see below, they worked and taste absolutely delicious. Fit for the sugar plum fairy herself!

1. Make the purée. Peel and core the pears. Chop and put them in a food processor and blitz to a purée. Pass through a sieve to remove any remaining bits, and tip the purée into a saucepan and cook briefly. Leave to cool to lukewarm.

2. In the meantime, put the sugar and pectin powder in a bowl and mix well – you want to get rid of any lumps of pectin.

3. In a small bowl mix the water and tartaric acid crystals. Add the pear liqueur or eau de vie.

4. Measure 250g of the pear purée and put in a saucepan. Add the glucose and sugar mixture. Stir well – it should turn syrupy. Add the green colouring and mix well.

5. Heat the mixture – it will come to a boil, and keep going until it reaches 107°C (225°F), stirring from time to time to prevent sticking.

6. Pour the cooked mixture into individual moulds or into a lined tray. Leave for several hours until completely cool and set.

7a. If making spheres: take two pieces of the fruit paste and sandwich together to make a ball. Roll in granulated sugar before serving.

7b. If using a tray: cut the set fruit paste into squares, or use cutters to make different shapes. Coat in granulated sugar before serving.