Feel like you’ve been missing out on the annual festive cheer? Well, don’t worry, I’m back with this year’s installation of the Twelve Days of Festive Baking. It does seem like I’m becoming a Christmas-only blog, but that’s something to tackle next year. In the meantime I hope you enjoy what I’ve had a go at this year!

To kick things off, we’re taking a culinary trip to the Alps. Switzerland has lots of traditional festive goodies, and I’ve made a few things from there in previous years (including this favourite of mine). This time I’ve made these funny little cookies called Chräbeli which are flavoured with aniseed. 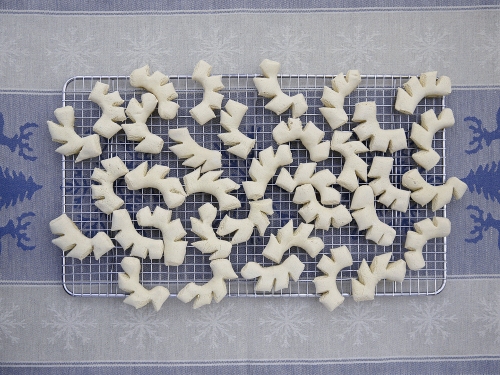 In a world of intricately-shaped and elaborately iced cookies, Chräbeli stand out. They look a little bit like branches from a twisted tree in winter. A tree that has had a heavy fall of snow overnight.

I’m someone that loves a cookie that gets its shape from how you make it. This is mainly because I am a bit lazy and don’t have the patience to carefully ice a tray of sugar cookies to get them all identical. I wish I did, and find watching that very thing on YouTube fascinating, but I’m just not able to sit still for that long. Maybe something to practice for next year? 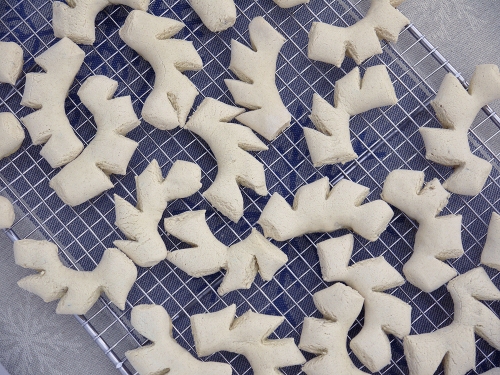 In spite of their unusual appearance, this is a very simple recipe – whisk eggs, sugar and aniseeds, then fold in the flour. The resulting dough is soft, and you need to develop the knack to form it into ropes, then cut and shape it. Then you do “the odd bit”. You leave them, uncovered, for a whole day. This is nothing about letting them rise, but it means that the outside of the cookies will dry and turn white. But the base doesn’t dry, and so when you pop them in the oven, you get culinary lift-off!

This really is the cool bit about making these cookies. The interiors of the Chräbeli expand and they develop little “feet” (Füsschen) underneath, a little like you expect if you make macarons. They were very crisp just after baking, but I let them sit in the open for a day, and they softened and I think were even more delicious. The aniseed flavour was definitely more pronounced a few days later, so letting them sit is worth it. 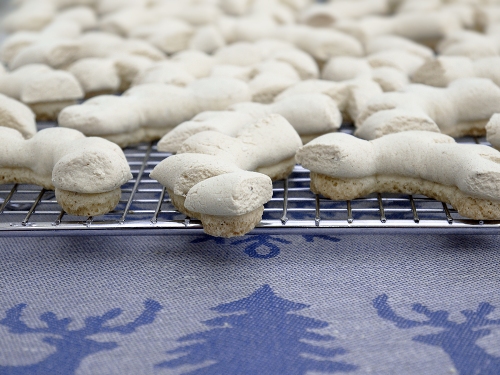 I loved just how aromatic these cookies are, with that distinctive liquorice-like aroma from the aniseed. I had planned to add some anise extract to boost the flavour, but found I had run out and just used seeds on their own. I need not have worried, as the flavour is very definitely there. If aniseed isn’t your thing, you could just use vanilla or lemon zest instead. However I think aniseed is delicious and a nice change from more common flavours at this time of year. They remind me of Springerle, albeit they lack the intricate patterns and are a lot easier to make. But we’ve got tree branches here people, and for that we can be grateful. If you wanted to get all whimsical, you could always attach a little icing squirrel or bird to keep the twig theme going. 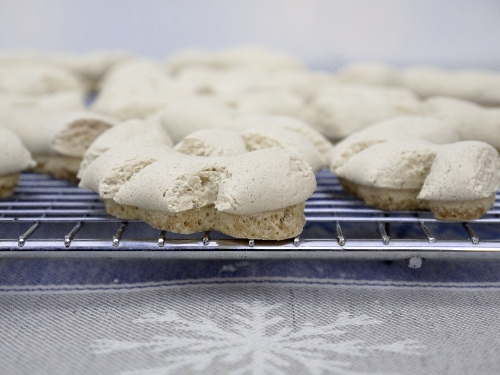 If you want to try something that is easy, looks interesting and really, really tastes of aniseed, then have a go at Chräbeli. I’m just a little bit addicted to them at the moment. 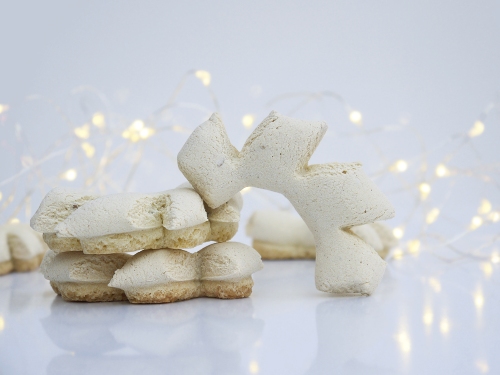 To make Chrabeli (makes around 40)

1. Prepare 3 sheets of greaseproof paper and rub each lightly with a little vegetable oil.

2. Put the eggs, icing sugar, salt, aniseed and Kirsch/Schnapps in a large bowl. Beat with an electric whisk until thick and creamy, around 5 minutes.

3. Mix in enough flour to make a dough (I added 275g first, then the rest) – it will be soft but hold its shape and not be wet.

4. Divide the dough into four pieces. On a lightly floured surface, roll each piece into a long rope, around 1.5cm thick. Cut into pieces of around 6 cm. Make 3 slashes in the dough (either straight or at an angle), and form into a slight crescent shape. Transfer to a baking sheet and leave somewhere cool (away from a draught) to dry for 24 hours.

5. The next day, check on your Chräbeli. They should be dry and look pale. Preheat the oven to 140°C (285°F). Bake the Chräbeli for around 25 minutes, turning the baking sheet half-way to get an even bake (note the Chräbeli should colour only very slightly – you want them to stay pale).

6. Remove from the oven and leave to cool. Allow to stand for a day on a wire tray so that the Chräbeli get slightly soft, then store in an airtight container.