I am a big fan of marzipan, so Cordiales de Murcia really caught my eye. They are traditional sweets that originate in the town of Pacheco in Murcia, Spain. Their filling is also a little unusual – cabello de ángel, a sort of pumpkin jam. 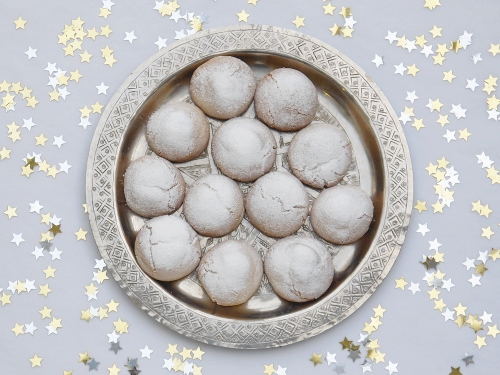 The name cabello de ángel means “angel’s hair” and comes from the texture of the pumpkin. When cooked, the flesh of the pumpkin separates into lots and lots of strands. It is turned into jam and flavoured with citrus and sometimes a dash of cinnamon, but the pumpkin keeps quite a bit of its texture, so think of it as being candied more than turning into a jam. I find it tastes a bit like apple jam, maybe with a hint of apricot. I’d had this in pastries on visits to Spain, and it took me a while to work out what the filling was, since it seemed to be apple but wasn’t quite.

Anyway, I had a jar of this stuff in my store cupboard for ages from a trip to Spain last year. I had planned to use then, got everything ready to make these cordiales and then remembered that at the end of summer I had used it all in the based of a quick apple tart. If I was going to make them, I would have to hunt high and low for a pretty niche ingredient, for it turns out that unlike membrillo, manchego or chorizo, you quite quickly find that cabello de ángel is not really stocked anywhere easy.

The Spanish supermarket near Ladbroke Grove was reporting on their website that they had sold out, so I had to trawl a number of websites to find one that, firstly, sold the stuff, and secondly, would be able to deliver it quite quickly. The good news is I managed (even if it meant paying a lot more than I would have had to do if I had been organised!). But if you don’t have cabello de ángel then you could use Spanish sweet potato paste or quince paste, or in fact any sort of very firm jam or fruit paste. You just want to avoid something too liquid, which could melt and pour out of the sweets during baking.

The actual baking process is quite easy – you make marzipan, then work out how to stuff it. The dough is quite soft, so I found the easiest way was to put a piece on some greaseproof paper or cling film, then cover and squash it flat. Then you can add some jam to the middle, and gather the edges up without everything sticking to your fingers. My first few attempts were cake-wrecks, so just do a bit of trial and error and find a method that works for you.

Once you’ve stuffed your cordiales, you need to shape them and it is traditional to place them on a circle of wafer. I normally don’t do this as the brand of greaseproof paper I use never ever sticks to whatever I am baking, and there is enough oil from the almonds to prevent sticking, but I wanted to go traditional here.

Now, I’ve mentioned the effort I went to in order to get that pumpkin jam? Well there were some recipes that suggested using discs of communion wafer, but by this point my commitment to authenticity had fallen asleep by the roadside, so I got hold of some rice paper and cut out circles of that. In fact, this actually worked really well, as you are able to shape them really easily and move them around on their pieces of rice paper (or wafers).

The most important question is, of course, how did they taste? Absolutely delicious. The marzipan has that lovely flavour of almonds and lemon from the zest, and the filling keeps the filling soft and is a little like apricot or even a gentle marmalade. They are slightly crisp when you’ve just baked them, and if you like them softer, just keep them overnight in a sealed container, and they will soften right up. All in all, a lovely addition to the festive table, provided that you’re willing to track down the right sort of filling, and you’ve got the patience for lots of shaping and stuffing!

1. Make the marzipan mixture. Combine the ground almonds, almond extract, sugar and lemon zest. Mix well, then add one beaten egg. Mix, and then add enough of the second beaten egg to make a marzipan. It should be soft enough to work with, but not wet or sticky. I used just over half of the second egg. If you add to much egg, just add equal amounts of almonds and sugar to get a texture you can work with.

3. Pinch off walnut-sized pieces of the marzipan. Flatten between two pieces of greaseproof paper. Add a small teaspoon of the angel hair jam (the size of a small grape). Fold the marzipan around the jam, seal, and roll into a ball.

3. Place the ball on a piece of rice paper, and shape to a slight cone with your fingers. Repeat until all the marzipan has been used up.

4. Bake the cookies for around 20-25 minutes until golden but not dark. Turn the tray half-way to get an even colour. Remove from the oven and leave to cool

5. To serve, dust lightly with icing sugar. Go easy, as these things are sweet, so you’re dusting for effect more than anything.