Cake of the Week: Tiger Cake

I realised that so much of my lockdown baking has featured almonds and nuts, so today I’ve opted for something different. Good old marble cake, or as I’ve also seen it called, the more exciting-sounding tiger cake. Since this cake is being made with the assistance of a five year-old, we’re going with tiger. Raaaaaar!

I have always think that a tiger cake is a very German sort of cake, something that you have with afternoon coffee when you’re not able to get hold of something richer and laiden with cream from a Konditorei. Or perhaps for when you’ve had too much whipped cream and want something simpler. I don’t know that it is particularly German, but that’s just the way I think of it. However a quick check on Wikipedia suggests that this is indeed where it hails from, originating in the 19th century.

What I love about this cake is that there is an element of magic to it – you mix up the batter, then there is a little bit of creativity in how you put it into the pan. Once it has baked, you have to hope that you have a nice marbled pattern inside and that you didn’t mix the two colours too much before it went into the oven. 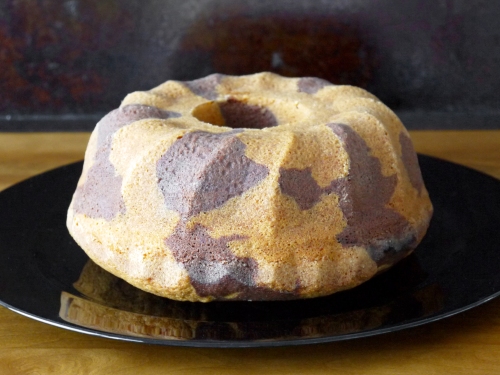 The trick to master is getting the right sort of patter inside. I do this using two spoons of the plain mixture, and then a spoonful of the chocolate batter, and keep going until you’ve put everything in the pan. Then I take a clean knife, insert it gently into the batter, and drag it carefully to get a bit more definition without mixing it up too much. But you can equally dump it all in and mix it up a bit with a spoon, or get super-fussy and put the batter into piping bags, and then squeeze out thin ribbons to get really detailed patterns. My son definitely enjoyed the spooning of the batter most, apart from the eventual eating of the cake…

When I make this, I always add vanilla, but sometimes I add a tiny amount of almond extract. Not so much that it is a dominant flavour, but it can add a little extra something to a cake that will be otherwise unadorned.

This is also a great cake to make ahead of time, and I think it tastes better the day after making. If you wanted to make it fancier, by all means add some sort of glaze, but I think it is fine as is, or with a simple dusting of icing sugar.

There you have it – tiger cake! This recipe is adapted from recipe of the fabulous Nordic Bakery in central London, albeit I’ve reduced the quantities so you don’t end up with a massive cake. There are just three of us in the house during lockdown, so there is a limit on just how much cake is safe to eat!

To make a Tiger Cake:

For the chocolate mixture

1. Preheat the oven to 180°C (350°F). Prepare a ring pan or bundt tin (mine was 20cm diameter, 10cm deep) – grease liberally with butter, then dust with plain flour, shake to get everything coated, and tip out any excess flour. Pop the pan into the fridge until you’re ready to use it.

2. Weigh your empty mixing bowl. Write down how much it weighs.

3. Make the batter. Beat the butter and sugar until light and fluffy. Add the vanilla, and mix well. Next one egg, beat well, plus a tablespoon of the flour. Repeat with the rest of the eggs. Finally, combine the remaining flour and the baking powder, then fold it into the batter. Finally add the milk and mix well. It should be smooth and soft, not firm.

4. Now you need to put one-third of the batter into a separate bowl. Weigh the main bowl again, and then subtract the weight of the empty bowl. Divide that number by three, and then take that amount of batter and put it into a separate bowl. Congratulations – you’re done this far more accurately than if you were doing it by eye with spoons!

5. Add the cocoa powder and milk to the separate bowl, and mix well.

6. Get the ring pan from the fridge. Add spoonfuls of the two mixtures – two of the plain, then one of the chocolate – and keep going until it is all in the pan. Try to get as much variation as you can so that the cake has lots of marbling / tiger pattern when you cut it later. Finish by dragging a clean knife gently through the batter for even more swirling.

7. Bake the cakes for around 40-50 minutes or until and inserted skewer comes out cleanly. Remove from the oven and leave to cool until lukewarm. Finally place a cooling rack or plate on top, then flip the cake over and it should come out cleanly. Wrap in cling film and leave to rest overnight.

8. Serve the cake as is, dust with icing sugar, or drizzle with chocolate or icing.