I lived in Belgium for almost four years, and in that time, I thought I had become pretty familiar with the local festive traditions. So it was something of a surprise to discover that they have a Christmas bread that I had never heard of! I finally found and tried one when I visited Brussels a few weeks ago, and I decided that it had to become one of this year’s Twelve Bakes of Christmas. 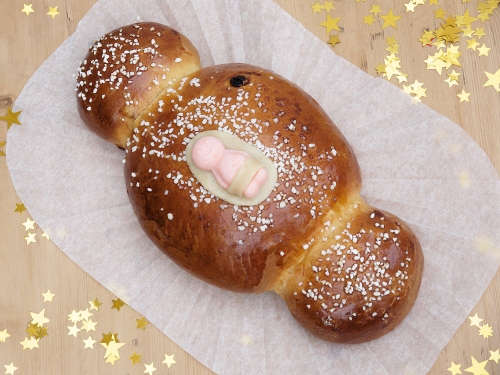 This is a brioche-like loaf called cougnou (in French) or volloard (in Flemish), and is also know as the pain de Jésus or “bread of Jesus”. It originated around Hainaut in south-west Belgium, and has spread across Belgium and the north of France.

The loaf is supposed to be formed to resemble the shape of the Baby Jesus. You can do this either using a special pot, or by forming the dough into three balls (two small and one large) and joining them together. Lacking the specialist mould and with no way to get hold of one quickly, I went freestyle and hoped for the best. As you can see, it worked and we ended up with a shiny, golden loaf that kind of has the shape of a swaddled baby. Which, when you think about it, really is just a little bit odd…!

There are a few different ways you can flavour the loaf. You could go for plain but raisins or sultanas seem to be pretty common. I happened to have some golden raisins in my baking cupboard, so I added those and they looked very pretty in the dough. Crushed sugar cubes are also popular as they leave little pockets of sweetness in the dough, while more modern versions us chocolate chips which are no doubt very popular with children.

You can make this with either plain flour, or bread flour. The former will give you a more cake-like texture while bread flour will have more gluten, so you will get a dough that rises more. I’ve tried both successfully. Yes, this was so nice I made it twice, since it turns out people are quite happy to tuck into a rich bread in the morning. It is best fresh, but is also nice sliced and toasted for a few days, so don’t worry if you can’t eat a whole one in one go.

The cougnou is topped off with a small decoration. In Hainaut they originally used terracotta circles (now plaster), but now it is common to see a little figure made from sugar to symbolise Jesus. In my case, I used a recipe for Dutch borstplaat sugar candy made in a jelly baby mould, and added some marzipan to finish him off. I think he looks quite sweet, but if you want to be more refined, you can make a figure using just marzipan.

If you have a go at making a cougnou, enjoy it the traditional way – with a cup of hot chocolate. It is also delicious toasted and spread with a little butter. So relax, enjoy your cougnou and as they say in Belgium – Vrolijk Kerstfeest (in Dutch), Joyeux Noël (in French) and Frohe Weihnachten (in German).

1(a). If using a bread machine: put the dough ingredients (apart from the raisins) into the mixing bowl. Run the “dough” cycle. When finishes, add the raisins and knead together. Simples! [But do check the consistency – you might have to add more flour or milk if it looks too wet or too dry]

1(b). If making by hand: put the flour and butter into a bowl, and rub with your fingers until the butter has been incorporated. Fold in the salt, sugar and yeast. In a separate bowl, combine the milk and egg, then pour into the dry ingredients. Add the vanilla. Stir with a spoon, then work with your hands until you have a smooth, stretchy, silky dough (at least 5 minutes). Leave the dough a warm place for an hour until the dough has doubled in size. Knock back and knead again for 2-3 minutes. Fold in the sultanas or raisins.

3. When risen, remove the plastic. Brush the surface of the cougnou with beaten egg, then sprinkle generously with pearl sugar.

4. Bake the cougnou for around 30 minutes until it has a deep golden colour. Turn the loaf round half-way to get an even colour.

5. Remove the baked cougnou from the oven. Cover with a clean tea towel and leave to cool.

6. Finish the cougnou by topping with a little figure made from fondant or marzipan.