We’ve done biscuits, we’ve done buns, so now it’s time for tarts! When it comes to Christmas, there is only one tart for me, that that’s a good old mince pie. These are one of the things that really tell you that Christmas is around the corner (even if they are in British supermarkets from about mid-August), and that mixture of dried fruits, citrus and spices, encased on buttery pastry is just irresistible. They’re often served up alongside mulled wine (which I also love), but I think you can get too much sugar and spice in one go. A mince pie and a good cup of tea is just about a marriage made in heaven in my book.

However, I recently saw a bit of a twist in mince pies that I thought would be interesting to try. Rather than topping them with more pastry, and running the gauntlet about whether the filling would make a break for freedom from under the lid (thereby sealing the pies into the tray), the suggestion was to top them with a frangipane mixture and a few flaked almonds. Having enjoyed great success with a frangipane and pear tart a few months ago, this sounded like a great idea. Not only that, but it worked, and it worked beautifully. 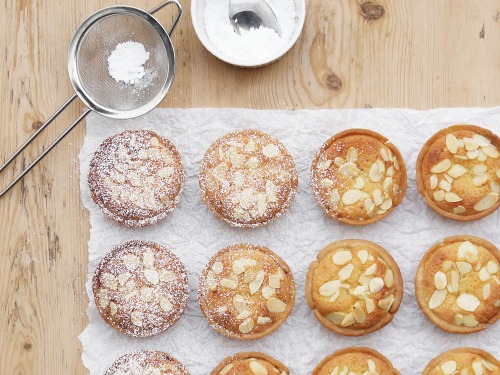 If you’re stuck in a bit of a mince pie rut, then I think these are for you. The pastry is a doodle to make, and the topping is super-simple. Just whisk butter, sugar and an egg until smooth, add some flavours, a bit of flour and some ground almonds, and pipe on top of the mincemeat. In the oven, it transforms into a light, moist almond sponge with a glorious golden colour on top. Dust with a scant dash of icing sugar, and they look beautiful.

Now, I must confess that I’m not the sort of domestic perfectionist that makes there own mincemeat. Some people do, and that’s great, but I had a go once and it was a disaster. And you know what? You can buy amazing mincemeat, so I’m sticking with that route. Of course, I can never resist the urge to tweak, and mincemeat does accept additional ingredients rather well. I added a handful of crushed flaked almonds to mine, as well as a couple of tablespoons of brandy and the zest of a clementine to add a little more oompf. The additional citrus in particular really does help with getting a good flavour.

I also gave the frangipane a little extra helping hand – in addition to some almond extract, they have two spoonfuls of my home-made spiced pear liqueur and a spoonful of brandy, but you could add whatever you fancy – some Amaretto, Cointreau or dark rum perhaps? Again, I was not looking for a smack-you-in-the-lips flavour, just a subtle extra something.

If you’re not a mincemeat fan (and I gather, shockingly, that there are people who are not keen) then you could just replace it with jam. Something like spiced apple, plum or cherry would still be very seasonal!

And so…how were they? Well, I have to say that these are really, really good. This recipe makes quite a small amount of pastry, so the cases are thin and crisp, and the rich but light almond frangipane is a nice complement to the mincemeat. This is also a great option if you like the flavour of mincemeat but don’t want to use lots of it (or, alternatively, you’ve got to make a lot of pies and ran out of mincemeat!). This one is a keeper!

1. Start with the pastry – rub the flour and butter until it resembles breadcrumbs. Mix in the icing sugar. Add the beaten egg and work to a soft dough (add a bit more flour if needed – the pastry will be very soft but not sticky). Wrap in cling film and chill in the fridge for at least an hour (or overnight).

3. Make the frangipane. Beat the butter and sugar until light and fluffy. Add the other ingredients and beat until smooth and well-combined. You can do this manually, but it is much easier with an electric beater!

4. Assemble the tarts. On a floured worktop, roll the pastry thinly. Cut out circles and use to line the muffin moulds (if the pastry gets soft and is difficult to work, pop it back in the fridge). Put the tray of tart shells into the fridge for 10 minutes to chill, and then add a generous teaspoon of mincemeat to each tart. Spoon or pipe the frangipane filling into the tarts (fill to just below the pastry, as it will puff up slightly).

5. Sprinkle each tart with a few flaked almonds, and bake for around 20-25 minutes until the tarts are golden (you may need to turn half way to get an even colour).

6. When done, remove the tarts from the oven and allow to cool. Dust with a little icing sugar just before serving.

Today is something of a fond farewell to autumn, for I’m off on holiday today, and when I get back, we should be in the early days of winter. Or put another way, I’ll be spending a couple of weeks in South Africa enjoying late spring in a particularly attractive part of the world. All in all, I’m pretty thrilled about that! Table Mountain, Kirstenbosch Botanical Gardens, wine, beaches…what a perfect November!

Anyway, before that, a little autumnal treat from this side of the globe. I mentioned a few days ago that I’ve been really into pears this year. I’ve made pear jam, I’ve made pear crumble, I’ve made pear liqueur (again) and I used pears in a four-tiered birthday cake. I’ve made pear paste for cheese, and thrown them in salads with blue cheese and walnuts. All in all, a complete pear affair, but I think this little tart has really topped it all. It is one of those classic combinations of sweet, fragrant almond frangipane with pears, the lot glazed in apricot jam and looking oh-so-tempting as an after dinner treat. And the great thing is that it looks fancy but – shhhhhhhh – it’s really rather easy!

This tart looks fairly complex, but it actually a complete doddle to make. You really only need some decent sweet shortcrust pastry (use my recipe, use your own, or even just cheat and buy it – I get that some people have lives and need to do other things alongside impressing friends). The filling is just a case of mixing everything until smooth, and the only “tricky bit” is arranging the pear slices on top.

Now, in fairness, arranging those pear slices was a little trickier than I first thought. The trick is to cut the pear with a very sharp knife to get good, clean slices, then push everything so that it slides out into that fan shape. Then slide the knife under the pear fan, and carefully transfer onto the tart. It took me a couple of attempts to get it right, but nothing that you would not get the hang of very easily.

I have made a couple of little tweaks which depart slightly from the “classic” pear and almond tart, but I think that they really work. First, I spread a thin layer of pear and vanilla jam on the base. Thin, not great big spoonfuls of the stuff. It helps to add a little extra fruitness and sweetness at the bottom of the tart. I also mixed the jam with a couple of spoons of quince liqueur to add a little extra aromatic touch. If you’ve never tried it, I cannot tell you how good it is. Incredibly easy to make at home, and after a few weeks or months of resting, the result is a clear, golden liqueur that has a delicious apple-and-honey flavour. Second, I happened to have a bit of that pear liqueur left, so I added it to the apricot jam I used to glaze the tart, adding just an extra hint of fresh pear and spice to finish it off. A perfect little slice of autumn!

To make Pear and Almond Tart:

For the almond frangipane

1. Make the pastry – mix the flour and icing sugar, then work in the cold butter until the mixture resembles breadcrumbs. Add the egg yolks and cold water (a tablespoon at a time) until the mixture comes together. Wrap in cling film and chill for 30 minutes. Roll out and use to line a 20 cm (8 inch) loose-bottomed flan dish. Place in the fridge while you make the filling.

2. Preheat the oven to 180°C (360°F) and put a flat metal tray in the oven. This will help ensure the base cooks properly later on.

3. Make the filling – beat the butter until creamy, then add the sugar, almonds, egg and egg white, plus a few drops of almond extract. Watch out – the almond flavour stuff can be strong, so err on the side of caution!

4. Remove the tart shell from the fridge. Spread with the jam, then add the filling and smooth.

5. Prepare the pears – peel, core and cut in half. Rub each with a little lemon juice to prevent browning. Place each pear on a board, cut side down, and slice. Push from the thin end so that the pieces fan out. Slide a knife underneath, then transfer to the tart. Brush each with a little lemon juice so that the cut sides of pear do not discolour. Repeat until you have a giant pear star on your tart.

6. Bake the tart for 50-60 minutes until the filling has a good colour. It if looks like it is browning too quickly, cover loosely with tin foil and turn the temperature down a little.

7. Once the tart is cooked, remove from the oven and make the glaze by mixing the apricot jam with the brandy/pear liqueur. Brush over the warm tart and leave to cool.

Worth making? This looks fancy, but is actually fairly easy to make, and tastes great. I made it for a party, and it was the first tart to go completely, with people coming back for seconds, so I dare say that this is a pretty good recipe!