Everyone like a bit of Austro-Hungarian grandeur now and then, and I was really rather excited when I learned that one of the nicest little streets around Angel has acquired Kipferl. If you know your baked goods, this should be saying “Austrian” right now, and this little café brings a little hint of Viennese life to the area. It’s located on Camden Passage, a lovely little pedestrian lane just off of busy Upper Street, with a great mix of independent antique shops, art stores, jewellers (think original 1930s art deco a la Wallis Simpson) and vintage clothing stores, so it’s a welcome addition.

A friend had mentioned this place to me, and I went there one Monday in January. I had a free day, and fancied that something noodle-focussed with cheese, a piece of chocolate-and-apricot-jam-rich Sachertorte and a cup of Wiener Melange would be in order against the cold weather.

Well, finally, finally I manage to get myself together and go there for dinner, and I’m very happy to have discovered that it’s really a rather lovely little place. Given this is a short bus ride up the hill from my place of work, all in all this works out rather well.

The style is what I recall from my visits to Austria as “new Viennese” – white walls, lots of wood, and veering towards the Nordic (but there are nods to history – can you spot Mozart up on the wall?), and everything in a modern, functional font. It’s a clean look that does work rather well in a café, as I have a bit of a fear that lots of dried flowers and ruffles probably hide nightmares made of dust.

So, all things equal, if you’re looking for chintz, baroque and lots of Empress Sissi, this probably isn’t the place to come. Of course, you’ve got a riot of purple and decadence across the street in the Paul A Young chocolate shop, and I’ve no doubt that their sweet treats would have made the French (but in reality Austrian) Queen Marie Antoinette really rather happy. Would she have tried the Marmite flavour? Doubtful, but she would have love the salted caramels and truffles.

However, I digress. Back to Kipferl. The name is German for croissant, and it offers a simple, modern take on Austrian food. I’ve got a soft spot for this cuisine and the Austrian people after spending a few holidays in Styria in the south of the country, where the local specialities are white wines and pumpkin oil (of which more below), both consumed on terraces in the middle of small vineyards that cling to the sides of steep valleys. In Vienna, I’ve been to excellent chic restaurants that served traditional food prepared simply but well – memories of fried Spätzle noodles with cheese still linger.

It’s fair to say that this is all good, solid fare for people who would be doing a lot of walking up mountains. Julie Andrews and the Von Trapp children might have enjoyed singing up the side of a mountain, but I would wager that it was a plate of Kaiserschmarrn or Spätzle that powered them up there and helped them recover after the hike back down.

During my visit, we tried a goat cheese and lentil salad, spinach dumplings and the classic – cheese Spätzle noodles!

The first two were delicious, but the latter – oh my! The picture doesn’t really do the dish justice, but it was delicious – substantial, with lots of cheese and a side of fried, golden-brown onions. I wolfed this lot, then picked the pan clean. 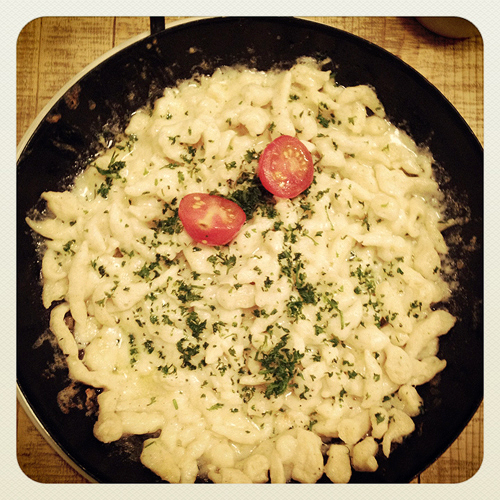 After all that hearty food for a main dish, you might think there was no room for a dessert, and you would be right.

Except…those Austrians have a knack for cakes and sweets. Think about it – Danes don’t eat Danish pastries, they call it wienerbrød (Viennese bread). The French nibble on Viennoiseries (“thing from Vienna”). And at Kipferl there is a decent selection of bakes to have with coffee as well as a choice of traditional goodies – rich Sachertorte cake, Kaiserschmarrn chopped pancakes with fruit compote and apple Strudel. With a beaming waitress egging you on, it is sort of difficult to say no… 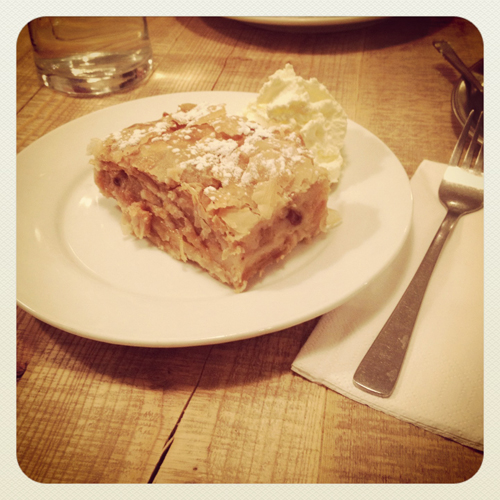 Both desserts were delicious. On balance, I have to plump for the Kaiserschmarrn which were rich, lightly sweet and came with a dark cherry compote and fresh berries. It was a calorific way to round off a meal, but very pleasant.

Just room left for the coffee, and I loved how the different options – from very milky to black – are explained with this little colour chart. Rather nifty!

After dinner, I had a little wander over to their display shelves, where you can pick up Austrian wine and pumpkin oil. It’s the latter that I was delighted to see – it’s made from pumpkin kernels, which give up a thick, dark green oil that has a rich, nutty flavour. It works wonderfully on simple green salads, drizzled over noodles, stirred into risotto or mixed into thick natural yoghurt for a dip. It tends to be on the pricey side, but if you do happen to see some, it’s well worth picking up a bottle.

So…would I go back? Most certainly. This place has a nice, relaxed feel to it, and it’s just that little bit hidden away so as to stay special. In particular the staff were very charming – I suspect they were Austrians, and could not have been more polite or helpful, yet maintaining a distance when you were mid-meal. You might not be able to work out how to solve a problem like Maria, but you know that you would at least be able to have a heart-to-heart with her over a decent Wiener Melange in London town.

Frozen yoghurt. These two simple words usually suggest one thing to me – the frozen “treat” for people on a diet and who seek to deny themselves the pleasures of life. They want ice-cream, but they are settling for a poor substitute. Very LA, some sort of “fun lite”.

I had this thought in my mind when, on a warm Friday afternoon, I passed Frae on Camden Passage in Islington. The store looks quite funky, all whites and lime greens, and is tucked between the cool boutiques and trendy antique stores. What the heck, let’s try it, I thought.

Frae offers plain (“naked”) or green tea flavours, and is vocal about their all-natural product (a good thing) and the fact they are low cal and 100% fat free (less appealing to me – you see why I’ve always through of this as a diet thing?). But the fun part is that you can then pimp your frozen yoghurt with a variety of toppings – fresh fruit, granola, cookies, brownies etc. There was even chopped-up mochi – the most innovative topping I’ve seen for a while by quite some way.

In the end, I played it safe and went for blueberries and blackberries. I got a bit tongue-tied, and my initial request was to blurt out the Scottish terms for each, blaeberries and brambles(*), my Scottish accent drawing a blank from the Aussie behind the counter. I found this all the more amusing given that Frae claims that its name comes from the old Scots word for “from”. Once we finally understood each other, I was able to wander off into the sunshine with my frozen yoghurt forming a lovely peak and studded with ripe fruit. I think I should point out that by the time I took the picture, I had tried it and it had melted a little, but it did originally look picture-perfect.

I have to say, this stuff was good. All my doubts vanished. The reason? Frae’s offering is obviously yoghurt and not a fake ice-cream. It still has a nice, sharp, acidic tang of natural yoghurt and tastes very fresh. I thought the combination with the fresh fruit was absolutely delicious, while also being quite light. I am a person that usually has fruit sorbets in the hot weather, and I can happily see myself eating this. It almost felt healthy, and I suspect it might actually have been good for me. Just a little bit.

Would I go back? Yes! I am definitely a frozen yoghurt convert. I want to try the green tea flavour (after my recently flirtation with making green tea truffles) and just eat more of the plain stuff topped with fruit. I see this as a new summer food – I’ll have it in addition to ice-cream, just don’t ask me to choose between them.

(*) I still instinctively think of fruits and vegetables by the names we called them in Scotland when I was a child, hence to me blackberries are brambles, and blueberries are blaeberries. And what my English friends call swede, I call turnip, and what they call turnip, I call white turnip. Food and culture, eh?