I realised that this year, I’ve done quite a lot of posts that require some strange/odd/niche ingredient, which is of course not great if you want to try something at home and don’t have all manner of strange powders in the house with which to perform culinary magic.

Today’s recipe is one that looks very fancy, but is actually made with rather more humble ingredients (or as humble as I get in the kitchen). But just to make sure that these biscuits still look very jolly, I’ve made them using biscuit presses, and finished them with a dusting of edible gold lustre, of which more later. Rather fetching, aren’t they? 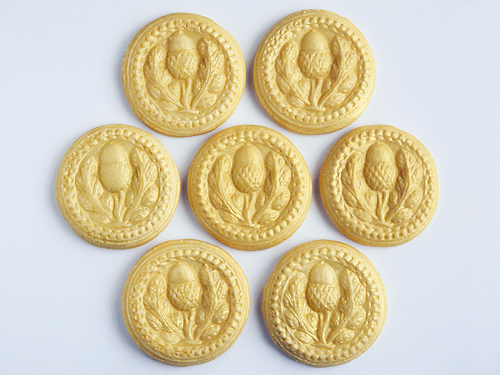 These cookies are called Frankfurter Brenten. They are made from a soft dough made that contains marzipan, sugar and egg whites, plus a dash of orange blossom water. This gives you a dough that is finer and easier to mould than plain marzipan, allowing you to get some very fine details. I made these using an oak leaf motif, and I think it looks fantastic. There is something about the shape that seems very fitting for Christmas. 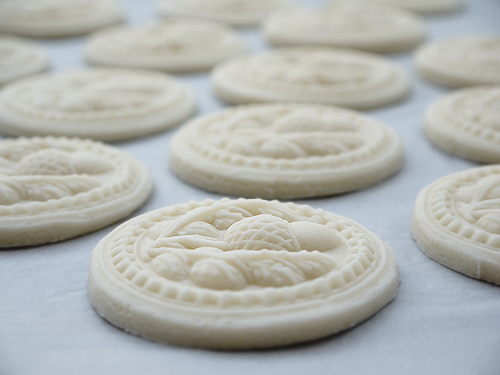 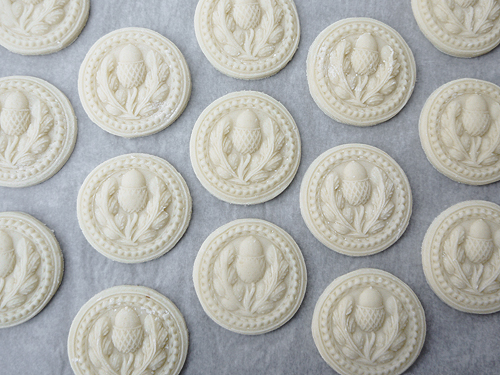 If you want to make these cookies without using a press, then I’ve got a few suggestions. First, have a look for something in the house with a pattern – think dominoes or printing blocks. If you are at a vintage market, a Victorian block with a festive pattern would look superb (just make sure they are not made from lead, and that they don’t still have ink in them!). Alternatively, look for things with a texture that you can press onto the rolled dough, then cut out shapes using normal cutters. The only limit I found is that very tiny biscuits will puff up too much in the oven, one side will expand faster than another, and they won’t look too pretty. I think you could remedy this by baking at a very, very low temperature or just stick to making larger Brenten.

Once baked, you could leave the Brenten plain, but I wanted to decorate them in gold. I though the design I had used had the look of medieval carvings, like the bosses you might see in the vaulted roofs of old cathedrals. They also reminded me of the Elizabethan marzipan tradition, and I wanted a nod back to that too. In Tudor times, a confection known as marchpane would be prepared from almonds and sugar. This mixture was bound with a little rose water, and the resulting paste could be fashioned into elaborate and intricate shapes. Think figures, pictures, fruit, swans, portraits. An essential part of the confectioner’s repertoire in those times, and essential to get right, as essentially whatever Good Queen Bess wanted in marzipan form, she more likely than not had to get, lest you wanted to risk being sent to the Tower of London. Given the ingredients, marchpane was a luxury (containing exotic almonds and sugar, out of the reach of all but the very wealthiest), and it was finished accordingly, often with real gold leaf. This was confectionery as art, and art that was intended to impress the great and the good.

Now, to be clear, I have not been so needlessly extravagant as to cover these biscuits with actual gold (we’ll leave that for another day when we’re feeling a little more flush with cash, which after holidays we are most certainly not) but to get a similar effect, I finished them off with a light glaze made with edible gold lustre dust, and then brushed some more of the dust of the details to produce almond confections that glow warmly under the Christmas lights. On a black plate next to the Christmas tree, they looked stunning, and almost too good to eat. So…feeling a little festive now? 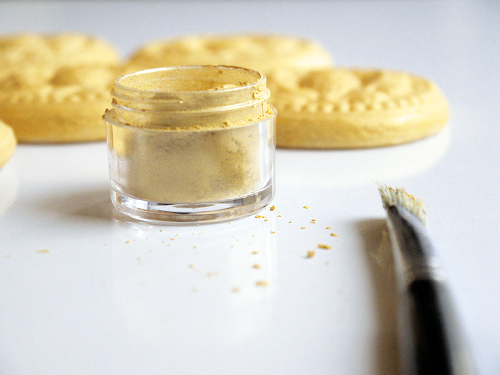 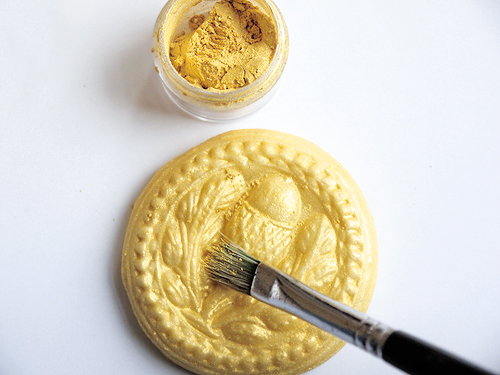 Now, for all of this splendour, how to they taste? The flavour is clearly strongly of almonds. I used quality (high almond) marzipan, but the result of the mixing and the baking is that the almond flavour seemed even more intense, which I loved. They are also incredibly rich, even ignoring that they are covered in what looks like gold, and they have a read wow factor. I look at them, and think wow! They’re a good biscuit to keep nibbling over a long period of time, not one to be wolfed down in seconds.

The texture was a little surprising. I thought they would be soft and slightly chewy, but I could not have been more wrong. They are dry-ish and firm, but have a slight crumble while eating. I think this texture is due to their size, shape and the fact I left them overnight to cure so that the surface would be dry and the details sharp. If you were to make smaller Brenten that were more cube or sphere-like, then I expect the texture would be different. But then, they would not look as truly awesome as these golden delights! 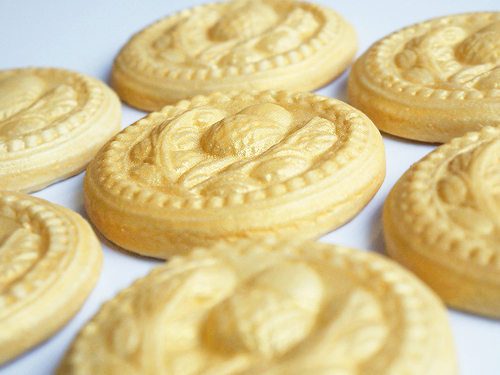 To make Frankfurter Brenten (recipe from House on the Hill)

1. Mix the flour and icing sugar in a bowl. Grate the marzipan coarsely into the icing sugar. Mix briefly then rub the mixture with your fingers until it resembles coarse breadcrumbs.

2. Add the orange blossom/rose water and the egg white. Mix with your hands until you have a smooth dough. Wrap the dough in cling film and chill for one hour.

5. To bake the Brenten, preheat the oven to 135°C (275°F). Bake the Brenten for 15-20 minutes until the “peaks” of the details are slightly browned. If you want to keep them white, place an empty baking tray on the shelf above during baking.

6. If you want to gild the Brenten, mix 50g of icing sugar with 2 teaspoons of water. Add some gold luster dust, and paint the surface of the cold Brenten. Leave to dry, then dust with the gold dust again. Job done!

(*) This means the water with a mild flavour. If you’ve got very intensely flavoured extracts, then dilute them one part flavour to three parts water. Otherwise the flavour is too strong, and it will be like eating perfume!

(**) Remember that as you press, the dough will be pushed out. It might be easier to cut the dough into pieces to match the press, then do the pressing, so that you don’t distort the images as you go.

Worth making? This is the sort of Christmas bake that you will adore if you are a fan of Marzipan. It’s also super-easy to make and the ingredients easy to get hold of. You can also make life easier by just shaping the dough by hand and making patters with forks that would look equally good. Pop the baked cookies under a very hot grill for 10 seconds or blast with a blowtorch for some extra browning on top!