Buckwheat is a funny old thing. It is a strange-looking triangular grain with an earth flavour and a strange yet compelling gritty texture. I like to toast them and add them to salads, but only a few. They are “interesting”, but I don’t put in great big handfuls as I would with pumpkin seeds or sunflower seeds. I have tried making Dutch poffertjes, and the buckwheat flour was a great addition to the flavour, a real success. But I have also tried making buckwheat flour bread. Those in the know will already be sniggering, because while it turned a glorious golden colour, it didn’t rise and it had the look and texture of setting concrete. Well, at least I learned something from that…

Then I went to the Japan Centre supermarket on Piccadilly, and there I saw packets and packets of soba noodles, 100% buckwheat. Why not? I bought them, and when I was home, I started to look for things to make with them. I stumbled on a simple sesame and soba noodle salad with spring onions, and it was fantastic. That was about four months ago, and I have been making it every two weeks since. This is my “quick fake Japanese noodles”, based on a recipe from Nigella Lawson but adapted for my own lazy habits in the kitchen.

The soba noodles have a lovely earthy quality to them, and a slightly gritty texture as you eat them, which I actually white like. Not just a pile of mush, but noodles with a bit of punch to them. The sesame serves to add crunch and pops in the mouth, while the spring onions keep things sharp and fresh, and add little flashes of emerald green and pearly white to the dish. This is all topped off with a simple dressing of rice vinegar, soy sauce, honey and sesame oil. All very simple and easy, healthy and absolutely delicious. Buckwheat, you make this dish a real winner in my eyes. 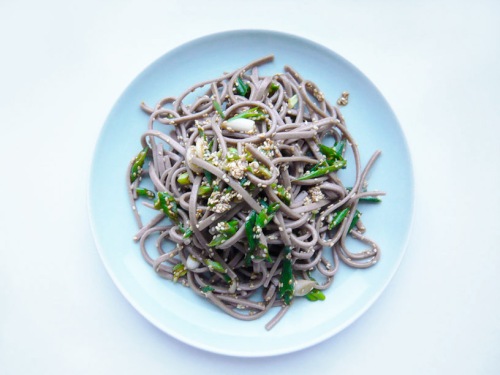 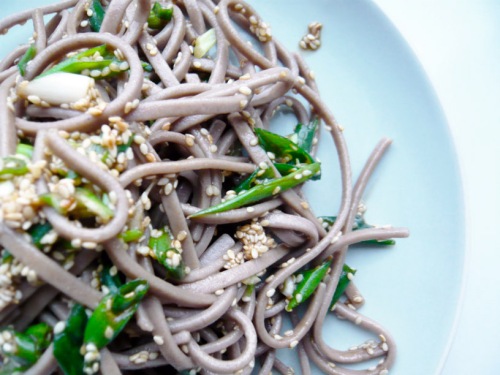 Put the sesame seeds in a saucepan, and cook on a medium heat until they are toasted. You will need to stir all the time to prevent burning and get an even colour. Put into a mixing bowl to cool.

Cook the noodles in boiling water according the instructions on the packet. When done, drain and cover in cold water. Drain and cover again with cold water. Leave to sit for 1 minute, then drain. Add to the sesame seeds.

Cut the spring onions diagonally into very thin slices. Add to the noodles.

In a jam jar, combine the sesame oil, honey, soy sauce and rice vinegar. Shake the jar well, and once combined, pour the sauce over the noodles. Toss well until well mixed, and serve.

Worth making? Easy, quick and utterly delicious. When you fancy something a little exotic but don’t want to spend long in the kitchen, this is a fabulous recipe.

After holidays, I have come back to London with a real desire to be a bit more healthy. With that in mind, I came up with this recipe. I make no claims that this is in any way authentic (but you might see my liking for faux-Japanese food?), as I just checked what I had in the store cupboard and played it by ear.

I wanted to keep the vegetables quite fresh and crisp, so I stir-fried garlic and ginger with marinated tofu, then added carrots, cucumber and edamame beans for flash-fry for a minute. I mixed this up with cooled soba noodles and shredded red chicory, then topped with sesame seeds and a rich dressing with sesame oil, sambal, miso and soy sauce. I’m happy to report that this was a really, really nice recipe. They soba noodles are a bit more chewy than normal noodles, and it was a nice combination with the fresh vegetables and the sauce. Fresh, light but also substantial. Will be making this again soon.

Cook the soba noodles in hot water. When soft, drain and rinse with cold water. Add a little sesame oil to the cooled noodles to prevent sticking.

In a wok, heat the oil. Add the ginger and garlic, and cook until the garlic starts to turn golden. Add the tofu and stir gently, adding a little water if the tofu starts to stick. After two minutes, add the carrot, cucumber and edamame beans and cook for one minute. If it sticks, add a couple of tablespoons of water. Remove from the heat.

In a bowl, combine the vegetables, cooled noodles, sliced chicory and the dressing. Toss gently, then serve sprinkled with sesame seeds and a couple of chive stalks.

Place all ingredients in a bowl and whisk until combined. Adjust as necessary, then pour over the salad and toss gently.

Worth making? Definitely. Provided you have the ingredients for the dressing in the house, the salad itself can be easily customised by whatever is available. This would also work well as a side dish with just soba noodles and fresh spring onions (scallions), or even add stock to the salad and serve as a soup.