I have recently been on a bit of a quest to start finding healthier snacks to take to work. Our café has been selling date and nut bars at a handsome premium, so I thought that I could easily make them myself. I mean, ground up dates and nuts, how hard can it really be? So yes…I’ve basically made what you probably already know  as Lärabars, but bear with me – I’ve actually done a bit of research here, and it turns out that these healthy sweet treats have a bit more history to them that you might think.

One of my most interesting little baking books is Cakes From Around The World by Julie Duff. One of the recipes that has piqued my curiosity is for Egyptian date cakes. These consist of nothing more than dates and almonds, ground with a dash of lemon juice, and then pressed flat between two sheets of rice paper. Julie muses that you can imagine cakes like this being made in ancient times, and having finally tried making date/nut bars, I have to agree.

These date bars are made me think of traditional festive sugar plums. I was always under the impression that sugar plums were some sort of candied treat, finally rolled in sparking crystals, but when I had a go at making them a few years ago, it turned out that they were actually rather like energy balls – little balls of dried fruit and nuts, dusted in icing sugar. It is actually quite interesting to look at that recipe with modern eyes – we see something that might pass for healthy (putting the debate about the amount of sugar in dried fruit to one side) whereas Victorians would have viewed them as luxurious treats, packed with all manner of expensive and exotic ingredients from far away lands. How times have changed.

So when I came to actually making date and nut bars, I didn’t feel that I was just having a go at making something that is a modern idea, but something that actually goes back a long, long way.

I used a simple ratio of one cup of dates, chopped, and one cup of mixed whole cashews and almonds. In my case the dates were fairly dry, so I soaked them in cold water for five minutes, but if you’re using very juicy dates, such as medjool, then you can probably skip this step. I also added some ground spices that I hoped would provide a bit of a gingerbread effect – ground cinnamon, ginger and mixed spice. I say mixed spice, but as I was feeling lazy, I used the first thing I could find, which happened to be a pot of Garam Masala. While I’m all for using whole spices and grinding them where I can, I think in these bars it is good to use pre-ground, as you’ll struggle to get as fine a powder as you do from a shop-bought mix. You want the flavour to disperse evenly, not little bits of woody cinnamon! 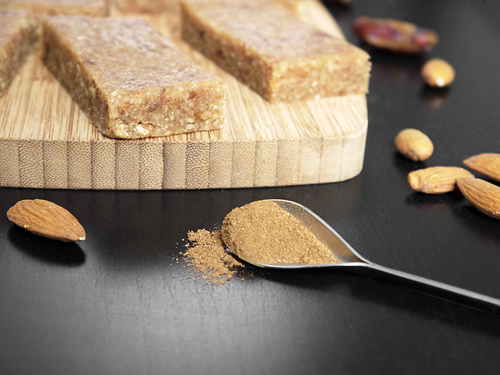 Once I’d ground the dates to a paste and worked in the nuts, I pretty quickly realised that I had ended up with something that was very sticky and was never going to come together. Luckily, I had a bag of ground almonds to hand, and I kept adding a handful at a time until it worked. It’s hard to say how much you’re need, just keep added a little at a time until the lot seems to come together.

I’m pretty pleased with the final result – kind of fruity and kind of nutty, with a real gingerbread flavour. They are also firmer than I would have expected, and after a few days in the fridge, they defiantly had a slight biscuity/cakey texture. I doubt that I would be able to pass these off as a genuine baked good, but as an easy and fairly innocent treat (just nuts and dates! no butter! no added oil! no refined sugar!) I think they’re pretty darned good.

1. Put the chopped dates into a bowl and cover with water. Rest for 5 minutes and drain.

2. In the meantime, grind the nuts. You want a fairly fine powder, but a few larger bits are not a problem.

3. Put the dates into a food processor and work into a smooth paste. Add the spices and the nuts, and mix well.

4. Remove the mixture from the food processor, and add as much of the ground almonds as needed until it comes together.

5. Roll the mixture into a square, wrap in cling film, and leave to rest in the fridge for an hour.

6. Cut into pieces and store in the fridge in an airtight container.

Worth making? I am completely impressed with how easy this recipe is and just how good they taste. A much better alternative to chocolate biscuits mid-morning!