Today’s regal bake-fest involves dainty little morsels called Queen Cakes. In spite of their very grand-sounding name, they are actually rather simple, and they are the perfect addition to an afternoon tea spread or to serve at a street party. However, I must confess that I don’t know the origin on the name – some suggest they were created for a queen consent, others suggest they were seen as the height of refinement (the “queen of cakes”) or that this was just a generic name for small, individual cakes before the rise of the cupcake.

These are simple small sponge fairy cakes that have been livened up with some sultanas or other dried vine fruit. No glaze, no icing, no mountains of fluffy pink buttercream. If you want to make them look fancy, just dust very lightly with icing sugar. I suppose you could think of them as the dignified understated and queenly addition to the tea-table in comparison to the cupcake’s gaudy courtesan or the scheming French court ambassadress as typified by the macaron.

I was pleased as I started to make these cakes that the eggs I had bought had decided add a crown stamp to the shells. A nice touch, yes?

The recipe here is very similar to Victoria sponge and would traditionally have required a large bowl, strong arms and a fearsome command of the hand whisk. Baking powder is a relatively recent invention, so the cook in olden days had to rely on getting lots and lots of air incorporated into the mixture. Fortunately, we can rely on creaming the butter and sugar, then adding the eggs and flour, but letting the baking powder in the self-raising flour take the strain. Whew!

These cakes would, in the past, have been baked in special pans, and if a heart shape was used, they were called heart cakes. Luckily, we live in a more modern world, and the convenience of the paper case makes these cakes a breeze, but I think they would still be rather nice if you can find some appropriately shaped silicone moulds.

As I mentioned, this is quite a straightforward recipe that does not need much adornment. However, if you want to make these cakes a little more fancy, I would suggest adding a dash of spice (nutmeg or mace would hint at the Regency kitchen), or soak the sultanas overnight in rum. Alternatively, you could prepare a simple water icing and brush over the warm cakes. Anything more might be a bit too flashy, and that would never do, would it?

As you can see, the finished results look rather nice when piled up high on the tea-table. These are what I’ll be contributing to a Jubilee weekend picnic, along with a couple of pitchers of Pimm’s punch. Cheers! 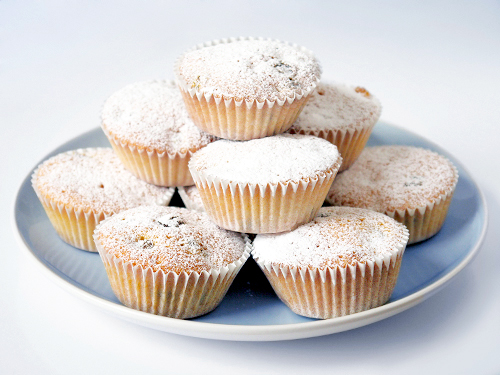 Preheat the oven to 190°C. Line a muffin tray with small paper cases.

Put the butter and sugar into a bowl. Mix well (best to use an electric beater) until light and fluffy.

In another bowl, whisk the eggs, then add, a little at a time, to the butter mixture, beating well after each addition. Add the salt and vanilla. Fold in the flour, then stir in the sultanas.

Divide the batter between the cake cases and bake for around 15 minutes, until golden and risen, and an inserted skewer comes out clean.

Leave to cool, then finish with a dusting of icing sugar.

Worth making? These are lovely little cakes, and make a change from very fancy, rich cupcakes. Great with a cup of tea mid-afternoon.