You might remember in the dark days of last winter, the announcement came from the Palace that there would be a royal wedding in 2011. Reactions were…muted.

Fast forward to Spring, and actually, the country seems to be completely cock-a-hoop about the whole thing. And the excitement is not contained to these fair isles, it seems the American media are really only just about able to contain how thrilled they are. We’ve seen Kate launching a lifeboat in Wales, Kate flipping a pancake in Ireland…yes, we (more accurately, the media) just can’t get enough of it. Kate shops, Kate crosses the road, buy Kate’s ring, wear her dress, and from late 2011, see her wax figure at Madame Tussauds. If you’ve got questions, there is a very helpful FAQ website here.

We were all supposed to throw street parties. We all thought “nope, won’t be doing that”. And then the shops were full of bunting and Union Flags for a bit of waving by the masses on the big day, and actually, we’ll probably all be doing it after all. The British, it seems, really do quite like a royal wedding after all. And best of luck to them!

To keep in with the mood of the nation, there obviously needs to be a little culinary nod to HRH Prince William and his future wife, and what could be more fitting that Maids of Honour tarts?

These certainly have a royal pedigree, but as with a lot of cakes that have a story to tell, there are a few versions floating about. Here are some of my more interesting findings:

Theory one: the maids of honour attending one of Henry VIII‘s Queens (possibly Catherine of Aragon) would nibble on these custardy, lemony treats (and the lemon link does fit with Catherine’s Iberian origins). So far, so nice. However, there is a darker element. The King, upon seeing how much the ladies enjoyed them, tasted one for himself, found it to be very good indeed, and so had to ensure that no-one else could learn the secret. How was this to be achieved? The unfortunate cook was locked up when he or she was not preparing pastry or zesting lemons. It’s probably a good thing we have moved from an absolute to a constitutional monarchy.

Theory two: these cakes were enjoyed by the maids of honour of Queen Elizabeth I when they were at Richmond Palace. The richness of these cakes (and remember – back in the day, lemons, sugar and butter were luxuries) made them famous and they were small objects of desire for fashionable members of the royal court.

Theory three: Henry VIII called these cakes “Maids of Honour” when he offered one to a future Queen, Anne Boleyn.

So we have learned…that we’re not exactly sure where they came from, but the Richmond link is strong, even to this day, and it seems to be a safe bet that they were around in the times of the Tudors. At this point, I confess that I am a huge fan of the recent TV series. Historically accurate? Maybe not, but a jolly good watch every weekend. 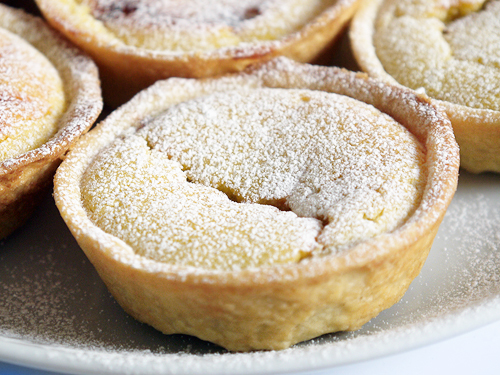 Now, at this stage, I realise two things. The links to the Tudors is probably not the parallel the I want to make with Wills and Kate (to whom I wish the best of luck). I’ve also failed to tell you what these cakes are actually like.

The cases can be made of shortcrust butter pastry of puff pastry. I used shortcrust here, but for the Big Day I will try them again but with puff pastry. The filling is a mixture of eggs, cream cheese, almonds and lemon zest plus a few aromatic “extras”. The filling sets when they are baked, so they are a little bit like mini-lemon baked cheesecakes. Some versions also add a little dash of something else under the filling – either lemon curd (to make them extra-citrussy) or some jam. I liked this idea, so I made some with lemon curd and some with seedless raspberry jam (typically British), but you could also use marmalade, apricot jam, strawberry jam or whatever else takes your fancy.

Now, the practical but – how exactly to flavour the filling? Lemon is a constant in all recipes, but as we are looking to make Maids of Honour for a Royal Wedding, I looked back to what would only have been available only to a royal kitchen back in Tudor times, and I went for broke: a pinch of saffron, citrus zest, orange zest, ground almonds, almond extract, orange blossom water, a pinch of cinnamon and a dash of nutmeg. Clearly not the sort of things your average peasant would have been able to get hold of. For for a queen indeed.

If you’re looking to make these, they are well worth the effort and make a nice treat for a picnic or tea. However, use saffron only if you like the flavour. I know it can be an acquired taste, so if you prefer, just play it safe and stick with the lemon and spices, which will still give a wonderful flavour and delicate aroma.

Put the flour, butter, salt and sugar in a bowl. Use your fingers and work until the mixture resembles breadcrumbs. Add enough iced water until the dough comes together (no more than 1-2 tablespoons). Wrap the dough in cling film and leave to rest in the fridge for 30 minutes.

If using saffron: put the milk in a saucepan and heat until almost boiling. Turn off the heat, add the saffron strands and allow to sit for 10 minutes until the milk is infused with the saffron colour and aroma. Put the cooled milk and the rest of the ingredients in a bowl, and mix with a balloon which until smooth.

If not using saffron: put all the ingredients in a bowl, and mix with a balloon which until smooth.

To prepare the tarts:

Add one scant teaspoon of jam or curd to the bottom of each case (not too much – or the jam will boil and leak out when baking). Fill each tart two-thirds with the filling mixture – it will puff up slightly during baking.

Bake the tarts for 20 minutes until the filling is puffed and the pastry is golden. You may need to turn the baking tray around half-way to ensure they colour evenly.

Once cooked, remove from the oven, and serve with a light dusting of icing sugar (which would also have been an extravagance in Tudor times).

Worth making? These are very simple but elegant little tarts, which are relatively straightforward to make, and taste great. The filling can be customised depending on exactly what you like in the way of flavours and spices. Will Kate eat them on the big day? We don’t know that yet, but might just be the perfect thing to impress guests are you’re gathered around the television on Friday.