Well, I say “good old-fashioned” but actually, I don’t know very much about them other than I like their name, so I thought it was about time to give them a bash. And a recipe from The Well-Cooked Life looked just perfect.

I know some people get terribly snobbish about baked beans and don’t like the tinned ones, but I’m not one of them. One of life’s greatest pleasures is a Saturday morning involving toast covered in cheese, grilled and then topped with baked beans. Delish.

Nevertheless, I was intrigued by the idea of making beans from scratch that had a bit more pep to them. A few minutes on Google told me that they are normally made with salted pork and molasses, so you’ve got a powerful savoury/salty yet sweet flavour. Clearly the pork was not going to happen in my case, so I added a bit of soy sauce instead to get more “savoury” than just salt would contribute. The other ingredients also promised something rather grand – lots of spices, hotness from sambal (my preferred way of adding heat to a dish), sweetness from molasses and fried onions and sharpness from some cider vinegar. 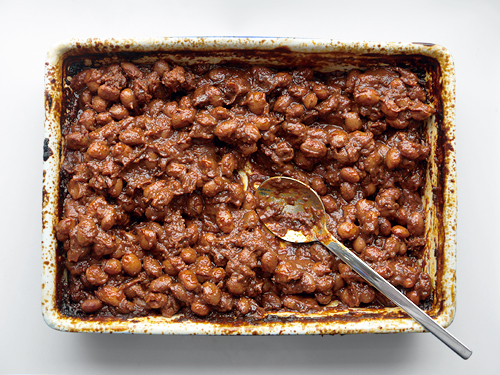 Boston Baked Beans are also a complete doddle to make, albeit a little planning is needed to make sure that the beans are properly soaked and cooked, but it’s mainly a case of soak, boil beans, mix sauce, bake.

One little wrinkle that affected my beans – I didn’t have dinky little beans (like you get from the tinned ones) so I used the ones I had in my cupboard, which were crab-eye beans. They were a little larger, and stayed a little firmer when cooked. They were still delicious, but when I make these again, I’ll be using the smaller beans in the future.

What you do need to be prepared for is that these beans are not a neon orange hue – all that molasses or treacle makes the sauce a rich red-brown colour. However, the flavour is completely, totally, utterly sensational. The sum is greater than the individual parts – and actually, that makes this a rather fitting dish for Fourth of July.

2. The next day, cook the beans according to instructions on the packet (how long you boil and simmer depends on the type). When cooked, drain the beans.

3. In the meantime, make the sauce. Fry the onions in the oil until golden. Add the garlic, cook briefly, then add the rest of the ingredients. Bring to the boil, then simmer for 20 minutes.

4. Mix the cooked beans and the sauce. Taste and adjust seasoning as required.

Worth making? This is a complete flavour explosion, and utterly delicious. The basic recipe should appeal to most tastes, and you can tweak and adjust the spices to suit what you like. Definitely worth having a go at.

I’m not a great shopper. In all the New Year sales, there was little that I was focussed on buying, other than a set of very large bowls. Dull!

Or is it? Like millions of others, New Year for me (aside for sparklers, streamers and champagne at midnight) means that it’s time to try being a little healthier, and so I figured that I could use these larger bowls to start making healthy noodle soups, something that would be filling without meaning lots of oil or lots of pasta. With that in mind, here is one of my first attempts. I am calling this phở chay (Vietnamese vegetable soup). Or maybe faux-chay? OK, bad joke…

Now, I use the term calling quite on purpose.  I cannot make any promises about how authentic this recipe, but I can at least say that it is made from things that you stand a sporting chance of finding in a well-stocked kitchen and it is pretty darn tasty. Perhaps the only thing I don’t usually have in the house is lemongrass, which I just added as I found it skulking in the back of the fridge, the victim of a well-intentioned but never-attempted citrus and  lemongrass posset.

To bulk up the broth, I have also used the ingredients that I like in this sort of soup – marinated tofu chunks and green beans, and soba noodles as I much prefer them to rice noodles. Soba has the rich, earthyness of buckwheat, and I very much appreciate that it is more substantial and chewy than rice noodles.

Now, when you look at making a phở, it can look like one of those “bit of a faff” recipes, but in fact I have managed to do the whole thing in just over an hour. Just think of it as a simple two-step process:

Part the First: make the broth. I have omitted any attempts at frying anything to start with, and just throw it all in a large pot with lots of water. Onions and other vegetables, plus stock, soy sauce and rice wine vinegar, to serve as the basis, and then a range of aromatics and spices. Star anise and cinnamon seem pretty much essential, and ginger is very much a “nice to have” (I’ve made it without ginger; it’s good, but with ginger it’s better). A teaspoon of sambal olek provides a little more heat, and a heroic amount of garlic tops the whole thing off. But I digress: put everything in a pot, boil then leave to simmer for an hour. One of the very useful things about this soup is that the broth will be strained to remove the vegetables and spices, so there is no need to waste time trimming things so that they look pretty on the table, unless that is your bag. But when you do come to strain the broth, keep the garlic cloves: they are transformed into soft lumps of sheer deliciousness, which are absolutely sublime added to mash or spread onto slices of very crisp bread.

Part the Second: adding “stuff” to the broth. I just go with whatever is to hand. Some sort of noodle is clearly essential, and while rice noodles are traditional, soba noodles really do work a treat here and I much prefer them. Visually not as much of an impact as white rice noodles, but the taste and texture really is great. I also like to add tofu, which I bake, then add to the broth to boil for 10 minutes before serving. This means that it has the chance to soften in the broth and the flavours mix. Then…top it all off with vegetables of your choice. Quick-cooking items such as mushrooms can be sliced and left raw, beansprouts can be thrown in as they are, while string beans or asparagus can be quickly boiled before serving.

Then, assemble it all! Put noodles and vegetables into your serving dishes, then ladle over the broth. Top with spring onions and a sprig of basil, and you’re done! Nothing more to do than get chopsticks and say: Chúc ngon miệng! (*)

To put in the soup:

To make the broth: Place all the stock ingredients in a large pan. Bring to the boil, cover, and simmer for at least an hour (can easily be made the night before and allowed to sit so the flavours are able to infuse the broth with their aromas and flavours). Once ready, strain to remove the solids and the broth is ready. You may have to add more water at the end, according to taste.

To prepare the soup: measure the “soup stuff” into bowl, and add enough piping hot broth to cover. Top with sprigs of Thai basil, mint and/or a wedge of lime.

Worth making? I was a little daunted by this at first, given that there are a lot of ingredients, but it was actually very simply to make. The only thing you need is time to allow the broth to simmer, so you get the maximum amount of flavour out of the spices – and I am afraid there is no shortcut for that. I would recommend trying to be light handed with the stock and soy sauce – you can always add more later, and we want the flavours of the anise, ginger, garlic et al to shine in this soup.

(*) Google tells me that this means bon appetit in Vietnamese! – I hope it does!