I had a phenomenally busy summer. Running around like a mad thing. Now, this is all well and good for a short period of time, but we all need a break, and what could be nicer than to spend a little time in the Scottish capital and then head up into the stunning countryside? So a few weeks ago, I headed up north.

I started off in Edinburgh. If you don’t know it, it is in my view one of the most beautiful cities in the world. Yes, in the world. A dramatic castle on top of an extinct volcano, the imposing Old Town with winding closes and steep public staircases, the leafy open spaces of Princes Street Gardens and the graceful 18th century New Town. 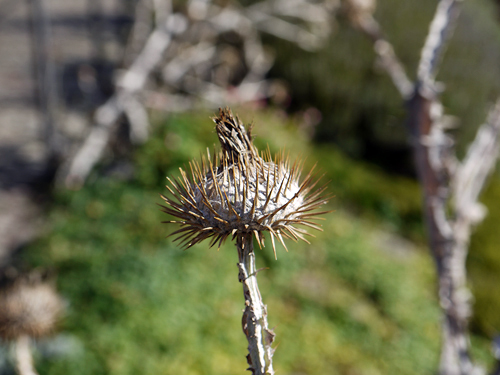 All sounds very romantic, yes? So you may wonder, why is the graceful city of Edinburgh known as “Auld Reekie”. This might suggest that the place used to stink, but it’s a bit misleading. “Reekie” in Scots can also mean “smokey”, so I guess “old smokey” is probably closer. Look at the city and you can see why – many of the older buildings are darkened by soot from many years ago, but I think this adds to the atmosphere of the city.

But these days, the city is happier to appear under the far more elegant moniker of the “Athens of the North”, a very fitting name when you consider the National Monument. It was intended back in the early 1800s as Scotland’s very own Parthenon, but it was never finished. And so it was left as is, and it now looms over the city like Edinburgh’s very own Greek ruins. But the reality of the name has more to do with the Scottish Enlightenment and Edinburgh’s role as a seat of learning. The city just happens to have some fake Greek ruins! 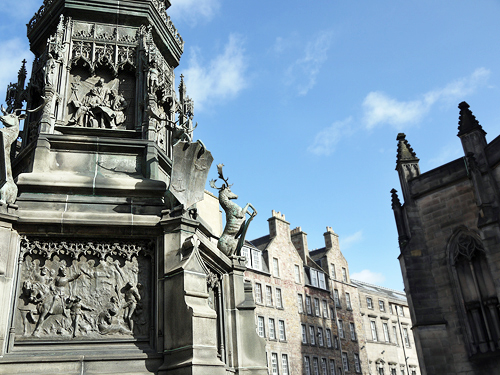 If you get the chance to visit, one of the most spectacular views (among frankly many, many spectacular views) is from the roof terrace of the National Museum of Scotland. From here, you can really appreciate the buildings that dot the city skyline, and on a clear day, you can see down to the coast, across the water the whole way to Fife. But when I popped up, the heavens opened. A dramatic, if somewhat bracing, way to see Edinburgh.

And finally…I could not resist taking a picture of this statue – it’s Greyfriars Bobby, a little dog who waited for 20 years next to the grave of his deceased master. Now he’s got his own monument and people flock to see him. Quite fitting really!

From Edinburgh, it was a quick drive up north to Perthshire, with the chance to enjoy lots of greenery and long walks in the Tay valley. As you can see, the leaves were just starting to turn, and after a little rain, there was also an explosion of mushrooms in the forests. We went for a walk at Dunkeld up to the Hermitage – a Victorian folly built overlooking a spectacular waterfall. I was last there in the middle of winter, when everything was covered in delicate ice crystals that form from the water vapour from the falls, but in summer, it is incredibly lush. 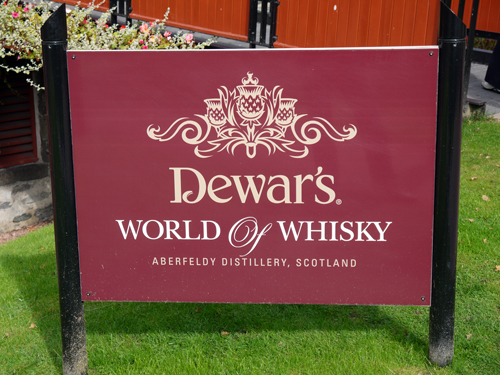 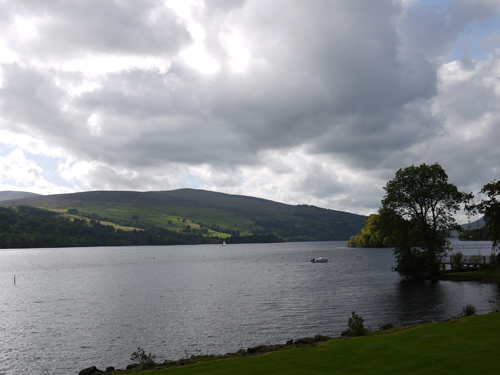 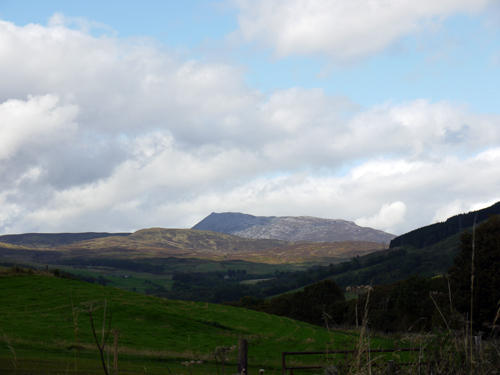 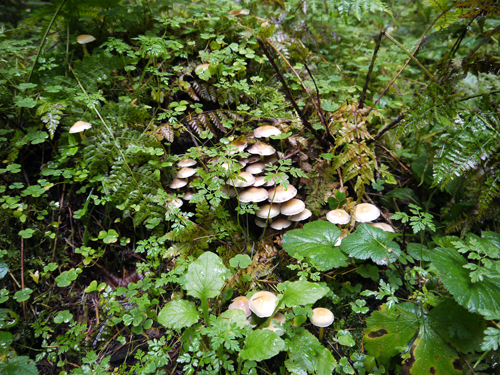 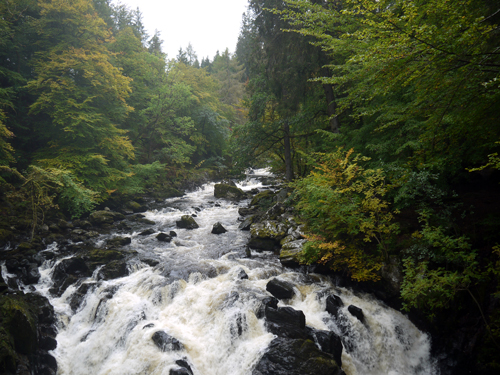 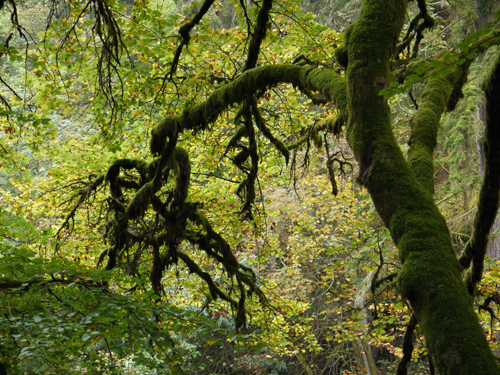 And to wrap up the trip, we came across a little hidden gem in the village of Grandtully – the rather amazing shop of Iain Burnett, also known as The Highland Chocolatier. As you can see, the selection looks extremely tempting, and from the selection that I bought, they tasted just as good as they look.

I think my favourite was a dark chocolate ganache with black pepper and raspberry (practically the national fruit in this part of the world, so very fitting). 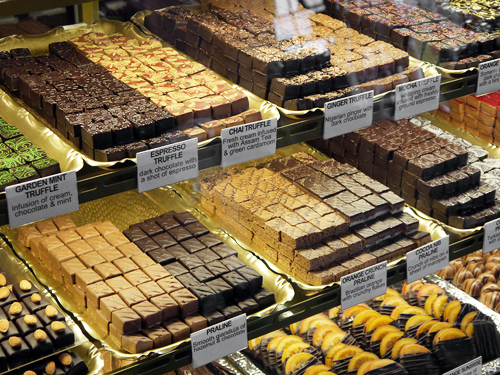 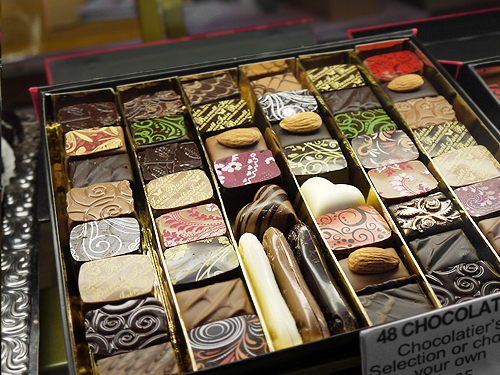 Alongside this dazzling selection of delicious-looking chocolates was something very special indeed. Whole candied clementines which were dipped in dark chocolate. When something is this appealing, you have to buy one!

The assistant (which was also involved in making the chocolates, and hence really knew her stuff about what was in the chocolates and how they made them!) explained that one of hear colleagues liked to serve them on a cheeseboard – the tangy-sweetness of the orange and the bitterness of the chocolate apparently went very well with certain cheeses. I probably should have tried it like that, but I ended up bringing one back home and nibbling on pieces over a couple of evenings back in London with a cup of tea. And very nice it was too! 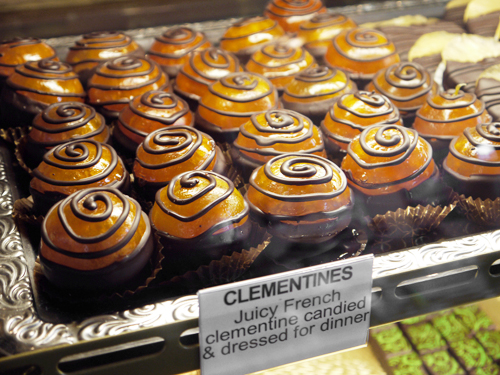 So I hope you’ve enjoyed a few holiday snaps and it has whetted the appetite to visit Scotland!