‘Tis the night before Christmas…and we’ve finally reached the twelfth post in my festive bakes series!

It’s been a while coming. It’s also been fun. I didn’t quite appreciate the volume of stuff I would be producing, but I know for next year! I will most likely mull over this project in the gap between Christmas and New Year, but at this stage I can say in confidence that it was great fun to do the series, and it’s great that it’s over. If for no other reason than I can stop buying sugar, marzipan and nuts, and instead focus on savoury dishes again. Whew!

Most of the posts in this series have been about baking, so I wanted to do something a little different. And given that chocolate and Christmas seem to go so well together, what about some truffles to capture the flavours of the season? 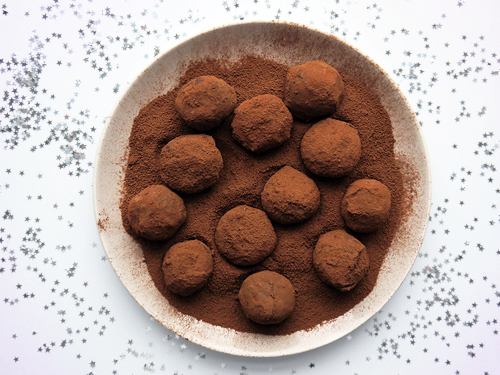 I have to admit to a fondness for fancy chocolate shops. When I pass one, I like to duck in, and I’m always impressed not just by the aromas or the flavours of what is on offer, but the work that has clearly gone in to making something look beautiful. And I think you have to appreciate it – good chocolate is an experience for all the senses. 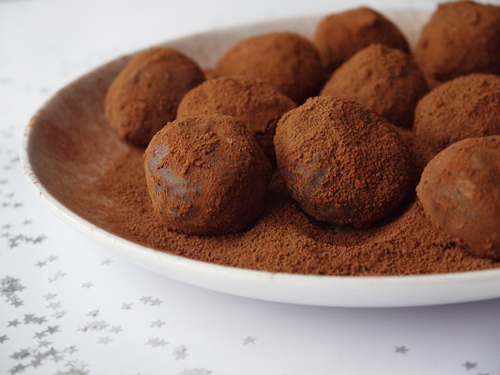 I was also planning to write a little about “my favourite chocolate shop” but, in all honesty, there are several in London and Brussels that I love to go to, and it’s not really fair to have to choose between them. Different people are doing different things so why limit yourself to just one?

That said, one of my favourites is Paul A Young, who runs a shop in Islington. I’ve got his book on all things chocolate (truffles, cakes, tarts, pasta…yes, chocolate pasta!). The book includes some stunning recipes that look very well-suited to the festive season. I would love to try his “Three Kings” bar of dark chocolate made with gold, frankincense and myrrh. In fact, I’d originally planned to make it as my final post, but I ran into a few issues – I could not source essential oils in time (i.e. I spent 10 minutes around Covent Garden and the ones at Neal’s Yard said you should not ingest them) and I rather balked at the idea of buying gold just to eat.

Now, in making these, I had an aim – to make silky-smooth truffle. What I have noticed with spiced truffles is that when someone has just tipped ground spices into the mixture, this can make an otherwise smooth ganache a little “gritty”. Not inedible, but not as smooth as you would like. What I’ve done to address that is to make a spice-infused syrup, which is strained, and thus has all the flavour but none of the bits. I brought a pan of water to the boil, added some sugar and two teaspoons of spice, cooked for a minute, then left to sit overnight. The next morning – very spicy syrup! By leaving the mixture to sit, you also allow the spice powder to settle, so when you come to strain it, you have very little by way of “bits”. So there is a little trick here – if you’re making a mixture that needs 200ml of liquid, boil up 250 or 300ml, so that you get mostly liquid, and don’t need to tip the wet spice powder into the strainer. This keeps the bits out, and keeps things “clear” (ha ha!). 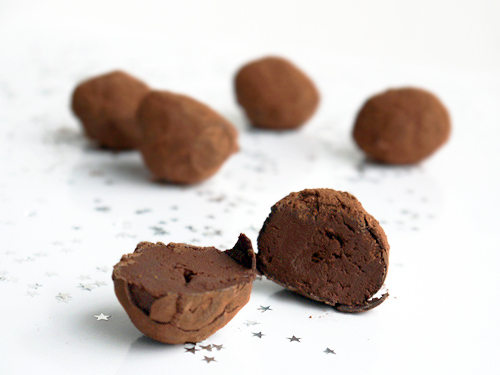 You could use any sort of spices you like in these truffles, but I kept to the festive theme and used a spoonful of my speculaaskruiden mixture and an extra teaspoon of cinnamon. I felt the cinnamon was needed to add some sweetness as well as to balance the stronger flavours of cloves and anise, which are fine in a biscuit but can become too much in a truffle. If you want to try something else, you can use cinnamon on its own, or something more unusual such as star anise, black pepper and cardamom. Intrigued?

The ganache part is actually very easy. Just chop up the chocolate into fine pieces, then pour over the warm (not too hot) liquid, and stir gently. You’ll hopefully end up with a thick, glossy mixture that sets to a firm but workable consistency. At this stage you’ve got two choices – either use as a sweet fondue and dip pieces of fruit and cake into it for a messy pudding, or allow the mixture to set and then form into truffles.

If you’re making truffles, you’ve also got two choices – either keep it simple by shaping them then rolling in cocoa or icing sugar, or adopt the complicated approach by coating them in tempered chocolate. I went to the latter option, and while it is fiddly, it does give you a lovely crisp shell to contrast with the smooth filling. I rolled them in a mixture of cocoa, sugar and cinnamon.

I took some of these as a gift, and if I do say so myself, they looked stunning. I lined the box with purple tissue paper, and I think the overall effect is really rather regal. What do you think? 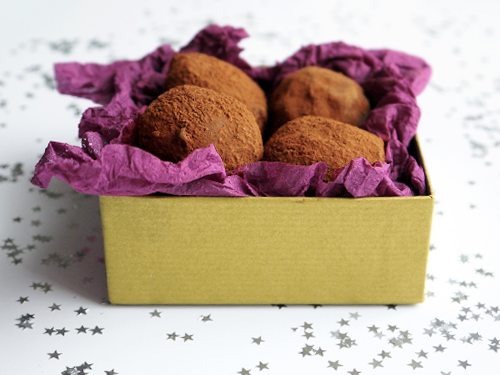 So that’s it – we’ve done the Twelve Cookies of Christmas (if you’ll let me off with the speculaaskruiden). Things will be quiet for a while as I down tools and enjoy the next couple of weeks. I hope you’re able to spend this time of year with friends and loved ones – wishing everyone Happy Holidays, a very Merry Christmas and Happy New Year! 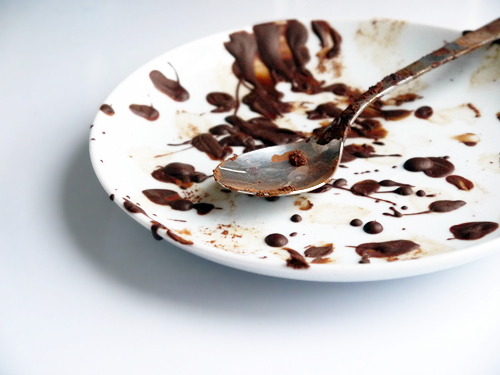 For the spiced syrup:

Put everything in a saucepan. Stir, bring the boil, simmer for a minute, then leave to sit for several hours or overnight.

Strain the cooled mixture through a fine sieve or cheesecloth. Leave the remains of the wet spices at the bottom of the pan – you want the syrup to be as clear as possible.

In a saucepan, bring the syrup, sugar and salt to the boil and simmer for 30 seconds. Turn off the heat.

Put the chocolate in a heatproof bowl. Pour the warm liquid over the chocolate, and use a balloon to gently stir the mixture until it is smooth and glossy. Leave to cool to room temperature, then transfer to the fridge until set.

To form the truffles, take teaspoons of the mixture and either use two teaspoons or your hands to form into spheres. Either roll in cocoa or icing sugar, or dip in tempered chocolate (see here or here how to temper chocolate).

Worth making? Making truffles can be a bit fiddly, but it’s actually quite fun and the results are always impressive. I think this way of infusing the mixture with the flavour of spices works really well – a mild, delicate flavour and the resulting ganache is wonderfully smooth. The only problem is stopping at just one.

For a long time, I have wanted to visit the Japan Centre supermarket in the centre of London. This week, I finally made it down there, and picked up a packet of matcha (Japanese green tea powder). It seems like the sort of thing that is useful to have in the store cupboard when you are called upon to produce something innovative and creative. But not having the patience to wait for the perfect excuse to use it, I started to think what I could make with it. Cupcakes? Dull. Cake? Flavour might get lost. Then it hit me: why not try the white chocolate ganache but with matcha? Rather than making a tart, I made truffles. I imagined that the ganache would be a vibrant green, and I was not disappointed.

I’m not usually crazy about white chocolate, as it can be very sweet and a bit cloying. However, as the green tea is grassy and a little bitter, this cuts through the sweetness and leaves the truffles with a lovely creamy taste with a little bit of a tang. These truffles seem really sophisticated, but are, in truth, really quick and simple to prepare. A really nice accompaniment to tea or as a little something sweet at the end of a meal.

Just a word of warning though: I rolled the first truffle in pure matcha. Way too powerful. The rest were rolled in 50/50 icing sugar and matcha, which was much milder/edible. I would recommend either using this mixture or even pure icing sugar (which will contrast nicely with the colour of the matcha-infused filling). 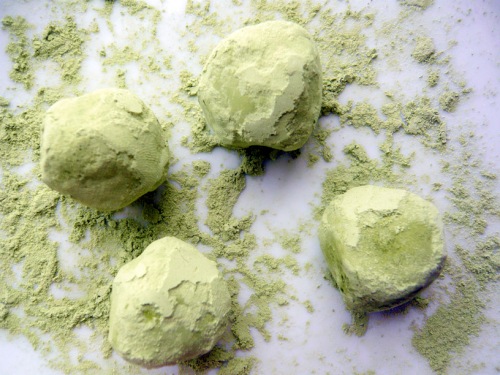 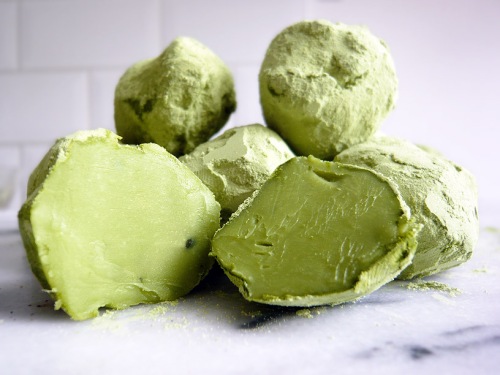 Put the chocolate in a bowl. In another bowl, combine the milk and 1 teaspoon of match until smooth.

In a saucepan, heat the cream slowly, and boil for 30 seconds. Add the matcha paste and stir well. Pour the hot matcha mixture over the chocolate, and stir until the chocolate has melted and the mixture is smooth.

Leave the mixture to cool, then leave in the fridge until firm (this can take some time). Form the ganache into truffles (it easiest to work it into a ball between two teaspoons, which also creates an attractive “rough” appearance). Roll the truffles in matcha, and store in the fridge. You may need to re-roll the truffles just before serving.

Worth making? If you like green tea, then you will like this. You can adjust the amount of green tea according to taste, but I would caution against more than 1 teaspoon in the above recipe. These make a nice addition to an afternoon tea or an after dinner petit fours selection where you want to offer guests a selection of tastes to try. 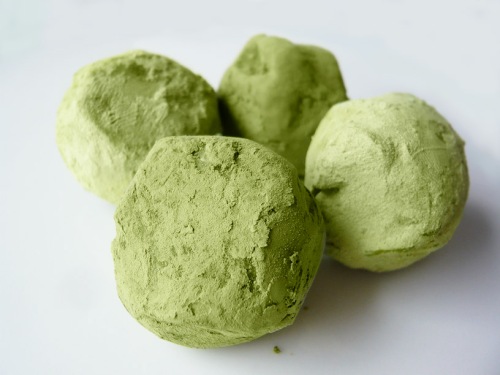