…and a wedding in Helsinki

The week before, it was Dublin.

A few days later, I was in the airport, watching for the BA flight to Helsinki. Leaving early evening, but with a three-hour flight and a time difference, I was arriving at about midnight. Of course, none of this mattered – what did matter is that our friend Frank was getting hitched, and a bunch of us were heading off to the Finnish capital for the wedding.

Helsinki is the kind of place that people know about, but typically have not visited. OK, it’s not Paris or Rome, but it does offer some beautiful architecture, culture, great food, good nightlife and incredibly friendly people. And of course, on this trip, each part was to be tested in equal measure.

Now, I wasn’t doing the sensible thing and taking a long holiday that lasted all of August. So this trip merited a few special touches, and that included staying in the very stylish Klaus K design hotel. This is a place, dotted with lots of nods to Finnish design (Iittala glassware, blond wood) but without doubt the highlight was the “organic breakfast”. When I checked in, I asked what time breakfast was open until, and winced slightly when the receptionist said only until 10:00…

She noticed my reaction. “It is a very good breakfast, worth getting up for” she added with a smile. And frankly, she was absolutely right. There was a great choice of granola, seeds, fruit, yoghurt and dried forest blueberries to start, followed by a selection of breads, local cheeses, pickles and a fantastic mushroom salad (honestly, I went on about it for about two days…). There was even a list accompanied with a little map showing where in Finland the various goodies were from. But without doubt, the two things I could not get enough of were made with sea buckthorn. The juice was delicious – it was mixed with apple, and tasted something like mango and pine (the tree!) – I think I had about four glasses each morning for breakfast. There was also sea buckthorn jam, a bright orange colour, which was enjoyed in copious amounts piled high on top of buttered bread. I quickly realised that I was going to have to keep an eye out for something with sea buckthorn to take back home.

With a free day before the wedding, a bit of sightseeing was in order. There are two things you notice quite quickly: the lack of an old town with winding streets, and the presence of lots of very grand streets and a grid-like street layout. This is down the fact that the city was heavily rebuilt in the 19th century, leading to the open, airy feeling that makes the city perfect to explore on foot.

The sun was shining, and first thing to do was wander down to the waterfront, where you can see the boats to Sweden in the distance. There is something about ferries that is much more romantic than an airport – people checking in for a voyage across the seas. I did the trip from Helsinki to Stockholm a couple of years ago, but it was the middle of winter, and I really must do it again in summer when you can relax on the deck with a couple of beers and watch the thousands of islands that make up the Helsinki archipelago drift by… 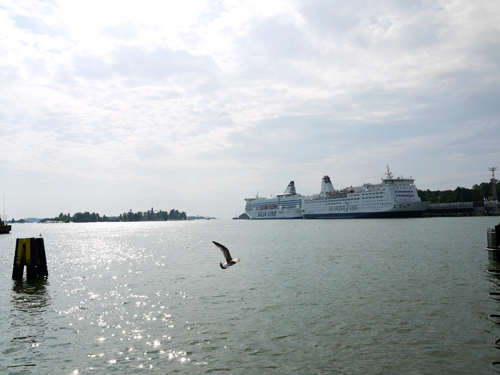 By the water, you come to Kauppatori (Market Square).

Sure, one end of the market had a lot of stuff aimed at the cruise ship crowd…but…the other end was, quite simply, amazing. There was a fantastic selection of Finnish food and fresh product – pastries, cakes, fruit, forest berries and piles and piles of mushrooms. Forget the little punnets of blueberries you get in the supermarket, here the were selling them by the scoop. Stunning colours and wonderful aromas. I loved the very “Finnishness” of the berries on sale – lots of puolukka (lingonberries) and mustikka (blueberries). 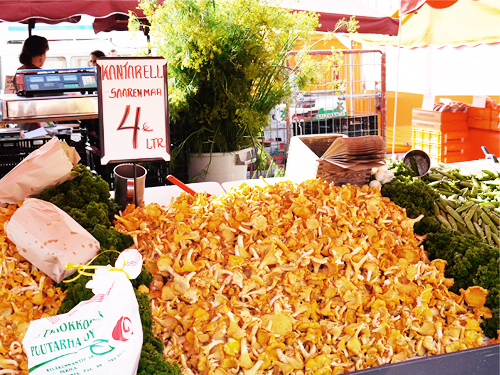 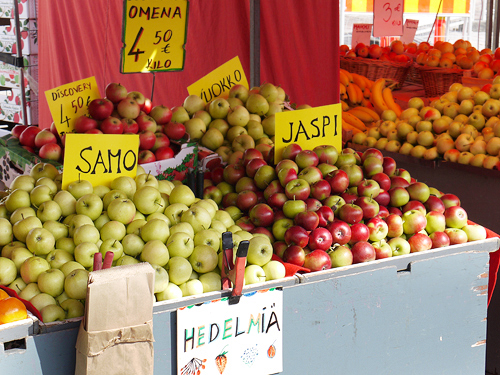 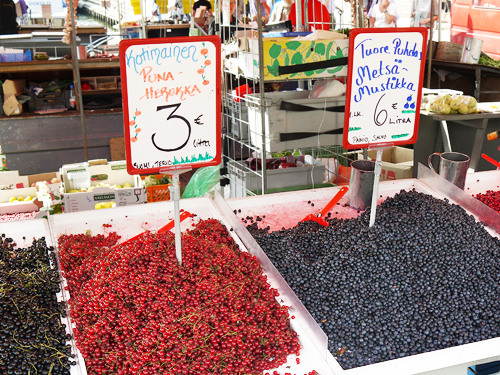 At the market, I was also delighted to find a stall selling sea buckthorn jam. They were offering two varieties – normal and sugar-free. I went with the normal variety as, well, it tasted better. If you’re going to come all the way to Helsinki to buy jam, buy the good stuff!

After the market, it was time for a wander along the esplanade to check out a little bit of Finnish design. There is a general “Nordic design” look to a lot of it (clean lines, more blond wood, glass…) but a lot of strong Finnish brands that stand out. Iittala is a favourite – known for softly angular glassware, and these funky whisky tumblers with a birch-bark pattern on the outside. Yes, I bought them. Yes, I probably paid more than I would have paid in London. But I got to buy them in a lovely shop which was decorated with pictures of the Moomins. Got to be worth it, surely? 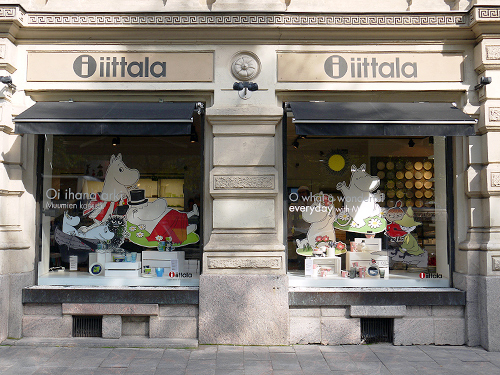 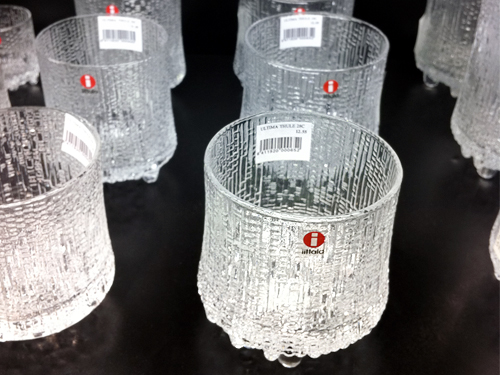 The afternoon was wrapped up with a stroll along the southern coastline of the city, dotted with parks and marinas. From here, keep heading due south and the next stop is Tallinn in Estonia. 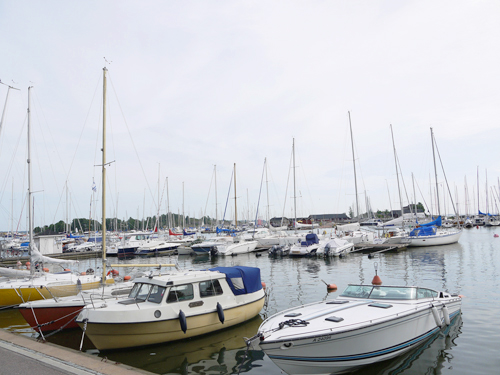 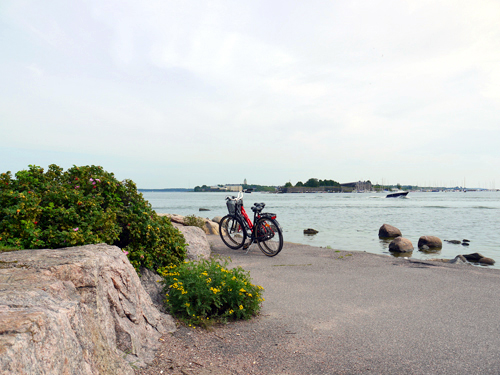 That evening, there was an informal get-together at the happy couple’s apartment. However, our little group had not eaten, but a garbled phone conversation between a Dutchman and a German revealed that there was an old church on the square opposite their apartment, which had since been converted into a restaurant. Apparently, it served great food and was large enough that we could safely turn up without a booking. Not to bad for a place that was “one of the most popular places in Helsinki”. Well, let’s give it try.

On the way, we popped into that most curiously Nordic phenomena, the state alcohol shop, to get a bottle of fizz for the party. Those straight-talking Finns don’t waste words, and the place is branded “Alko”. It’s like the cleanest, most orderly and well-stocked off-licence you can imagine. They apparently ID you if they suspect you’re under-age, and do this quite a lot. Sadly, I did not get checked.

We walked through town, and headed to this great-sounding restaurant-in-a-former church. Well, it was indeed “one of the most popular places in Helsinki” as it was Temppeliaukion Kirkko, a very-much-still-in-use church hewn from the rock. People go there because it is an impressive sight, and the only service on offer is of a religious variety. Feeling very sheepish, we stepped back and went to see our friends. Lesson? Check if your dinner destination is on the “Helsinki Top 10 Attractions” list, and really, get a tip for dinner and book ahead!

Saturday was the big day, so after another delicious breakfast, we wandered around in town. The gang headed to check out one of  Helsinki’s gems, the beautiful white cathedral on top of a hill. It’s one of the symbols of the city, and appears to float gracefully on the skyline. The simple white decoration is continued inside the cathedral, and it really did feel like an oasis of calm. As you can see, it also looks stunning against a brilliant blue sky. 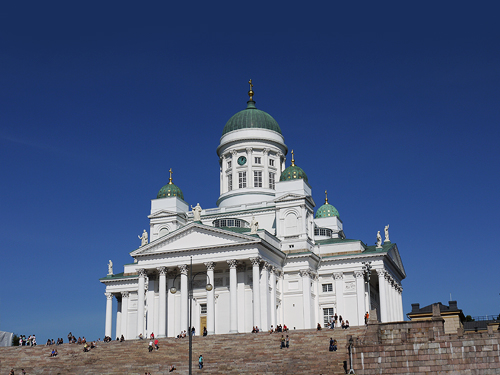 With a little time to kill before getting dressed for the wedding, I remembered the Ateljee Bar on the rooftop of the Torni hotel. This 13-storey building was, until the mid-1980s, the tallest building in Helsinki. It’s been overtaken since, but that does mean that it does still offer spectacular vistas over the city. The last time I visited, we went up at night, and apparently you can see all the way across the Gulf of Finland to the lights of Tallinn.

While wandering the streets, you will see that the signs are bilingual – in Finnish and in Swedish. But this one really caught my eye – a testament to the location of Helsinki and its history between Sweden and Russia. And if you’re curious, my best translation is that this all means “South Red Valley Street”.

Sights seen and  friendships renewed, we went back to the hotel, got dressed up, and headed to the wedding. The location was stunning – out to the west of the city, in the forest bounded by the Porkkalanselkä sea lake. The sky was cloudless, the sun was shining and the ceremony was perfect. Very simple and incredibly touching. We celebrated with the newlyweds until late in the evening, watching the sun go down and then as darkness fell, we ate, drank, danced and sat by the lakeside chatting and peering into the mysterious woodland night.

Now, a little confession. Those that were staying in Helsinki got a late bus back to town, and someone spotted a karaoke bar. We couldn’t resist. It was when someone said “How often do you get the chance to sing karaoke in Helsinki?” – we just had to. We piled in, bought outrageously expensive Finnish beers, and did a few rounds of Queen and Bon Jovi. And of course, all fired up from the wedding, we sang a raucous version of Always...

…but of course, this meant the next day involved mostly getting up late and mooching around town all day drifting between coffee here and a snack there. One undoubted highlight is the Fazer café, which is a fantastic 1930s-inspired venue that serves up a proper selection of fancy cakes. Think olde-worlde Viennese coffee house. You can also sample the range of Fazer chocolates – they are basically the much-loved confectionery brand that Finns hold very dear to their heart.

Aside from eating, we…well, actually we didn’t do much other than eat. The sense of achievement came from having the bright idea during the day to make a dinner reservation (we learned from Friday night!), so we tucked in to some good Italian food in Toscanini, and then, eh…went our for …more karaoke. That lasted from 9pm until 2am. Finns love their karaoke, so we just chalked it all up to a rich exchange of cultures. We did actually leave the bar around midnight, but unable to find somewhere that was as much fun, we went back. The look on the face of the hostess was priceless, as she clearly thought she was rid of these funny foreigners that kept on requesting songs in English rather than appreciating the Finnish classics. 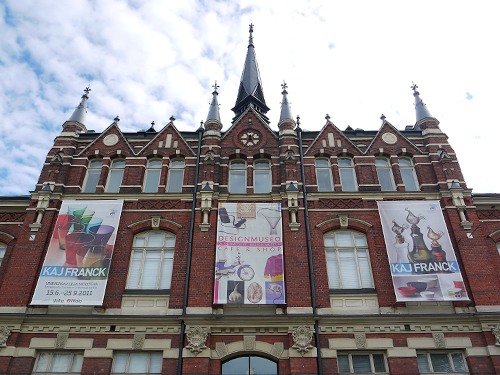 To make up for all that (admittedly out-of-tune) singing, Monday necessitated a bit of culture, so it was off to the Design Museum. There was an interesting retrospective on some of the designers behind Iittala, and how its range has developed from the 1950s up to the modern day. I loved seeing how some of the ceramics and glassware that had been on sale in their flagship store earlier in the weekend had actually come to be.

And finally, regular readers will also know that I have a soft spot for cinnamon buns, and have been on a bit of an oddesy to find them (most successfully at the Finnish-inspired Nordic Bakery in our own Golden Square in London). Well, as a last goodbye from Helsinki, before departing for the airport, I was able to enjoy a proper piece of cinnamon-infused loveliness with a cup of coffee. Sheer bliss. 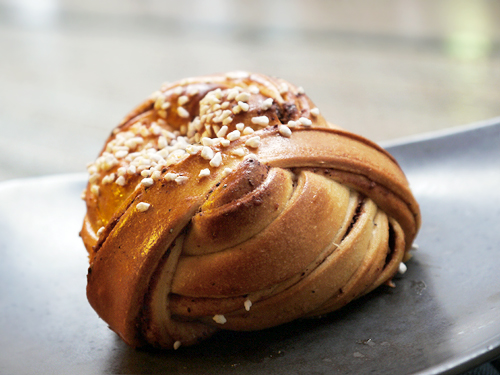 5 responses to “…and a wedding in Helsinki”