Darn. I missed posting something Norwegian in honour of 17 May, Norway’s national day. I was there a few years ago, and I can honestly say I have never seen so many people in national outfit waving their flag with such enthusiasm. They are Norwegians, they are proud of it, and they want you to know it!

But then…the 55th Eurovision Song Contest will take place in Oslo tomorrow. So, to make amends, here is my attempt at traditional Norwegian lefse. These are soft potato flatbreads cooked on a dry griddle. They were traditionally dried for storage, then revitalised by sprinkling with a little water and allowing to sit until soft. Useful when it is -30°C outside and you don’t really want to put on the snow gear to pop to the local shop. 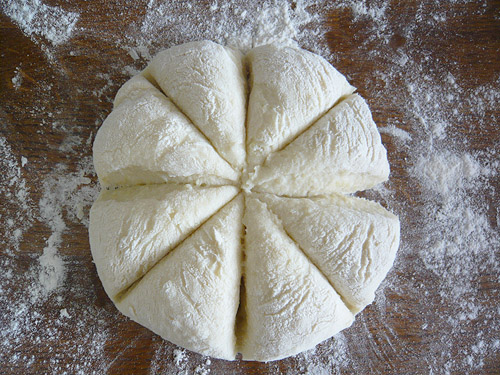 Now, not actually being Norwegian, I didn’t have a family recipe to hand that I could use. I did a bit of searching, and settled on one of the simplest – just potatoes, flour and salt. I reasoned that this was probably closest to the original recipe. I duly started to make them, but found that the potatoes were so sticky that the dough was unworkable. Even with a lot of flour on the rolling pin, the dough stuck to everything.

I put the mix back in the bowl, added a lot more flour, and success was mine. The dough was still sticky, bit I was able to work with it. I suspect this issue might be more to do with the type of potatoes I used, rather than the flour. If you attempt these, then I think you need less flour if you use “floury” potatoes which are quite dry, and more flour if the potato flesh is waxy and contains more moisture. I used normal white potatoes, but you can probably use anything you have to hand, adjusting the flour accordingly.

Today, you can of course buy lefse, but where is the fun in that? However you get them, there are a variety of ways to eat these, either savoury or sweet. I like to eat these Norwegian-style, spread with butter, sprinkled with brown sugar and cinnamon, and rolled up to enjoy with coffee. I’ll serve a few this way for a Eurovision party on Saturday, and use some as the basis of an open sandwich with Jarlsberg cheese and pickles. Yes, I have the responsibility of bringing something Norwegian!

Mash the potatoes until smooth (or use a potato ricer). Add the salt and flour and mix to a smooth dough.

Divide the dough into eight equal pieces. Roll each piece into large flat shapes (as thin as you can) on a well-floured surface, approximately 15-20cm diameter. The dough is quite sticky, so you will need to use a lot to stop them adhering to the work surface.

Heat a dry frying pan or griddle to a medium-high heat. Cook each bread on both sides until there are air pockets and coloured patches. The cooked breads will lose their translucent appearance.

Once cooked, remove and allow to cool. Before eating, store the breads under damp teacloths to make them soft. Doing this, even crisp, brittle breads will soften!

For the cinnamon filling:

Combine everything and mix until creamy. Spread on the cool lefse, roll up and eat.

Worth making? Yes. This recipe is quite messy, but it is simple and fun. You might need to experiment with the amount of flour, but just start with 100g, then add more as you feed necessary to get a dough that you feel you can work with. The finished lefse with cinnamon spread are great – chewy, flavoursome and spicy. They also keep pretty well – you can let them dry out, then revive them using a damp teacloth and a little patience.