Look outside. You see the start of green shoots on the trees, the occasional crocus and a few daffodils starting to peek out from the earth. Is Spring here? Maybe, but rhubarb most certainly is. Those vivid red stalks are a real sign that sunny days are on the way. And to badly misquote Kay Thompson in the Audrey Hepburn classic Funny Face, when faced with what can still be a rather drab time of year, Think Pink! 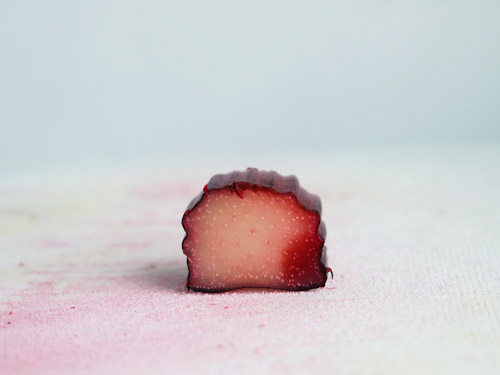 Mention rhubarb, and some wag usually sucks their teeth, and makes the a pronouncement along the lines of well, you know that it’s actually a vegetable. All well and good – tomatoes are fruit, bananas are berries and peanuts are legumes, so that doesn’t really bother me so much.

What does matter is how you cook rhubarb. Anyone who grew up in the UK would have memories from school of this fruit (ha!) boiled until it was reduced to a stringy, gloopy, grey-green pulp. Well, today’s recipe is nothing more than a way of preparing rhubarb that means you can forget the nightmares of childhood, and instead preserve the vibrant pinkness of the stalks and avoid the “stringy bits”. Sold yet?

Now, you might we wondering why on earth would I be looking to roast rhubarb? I know this sounds like an odd technique, and that poaching is more common. However, if you are cooking in water, you still run the risk of ending up with stringy gloop. Not by roasting though – it really is dead simple. Drench the rhubarb in sugar, cover, and bake in the oven until the rhubarb is pink and tender.

Like magic, the sugar has vanished, the colour is superb and you have a little bit of rich syrup at the bottom of the dish. Perfect to add to muesli, on ice-cream or to fill a rhubarb tart. All this, and you preserve the bright Barbie-pink colour, which might – might – even get kids to eat the stuff. Can’t be bad? And if you’re feeling fancy, use some of that syrup to make a Spring cocktail.

Just a note on quantities – you would want to use no more than about one-quarter the amount of sugar to rhubarb, but if you prefer to showcase the tartness of the fruit (ha!), feel free to use less sugar.

• pink rhubarb
• white sugar (1/4 the weight of the rhubarb)

Clean the rhubarb stalks. Cut off the ends, slice into 1 inch /2-3 cm chunks. Place in a glass baking dish, and cover with the sugar.

Loosely cover the dish with foil but make sure it does not touch the rhubarb (rhubarb + foil = trouble)! Bake for 30 minutes, or until the sugar has dissolved and the rhubarb is just starting to brown slightly. Remove from the oven and allow to cool.

Worth making? Forget green, mushy rhubarb – cooking this way will keep the vivid pink colour of the fruit and makes it a great addition to yoghurt, custard or on ice-cream.