Are you watching the Great British Bake Off? A group of people compete to bake classic British fare, with one kicked off each week. We were discussing it at work last week and there were many sighs along the lines of “Oh, I love the show, but I wish I could bake, just don’t have the time”. So to make a little contribution to turning that around, here is an easy recipe for a British classic from my childhood: coconut macaroons.

French macarons have taken the world be storm over the last few years. Well kids, this is a world away from them. Whereas their Gallic cousins are complex, tricky, sometimes gaudy, and come wrapped in expensive boxes with fancy fillings, our dear coconut macaroons hark back to simpler times. They remind me of visits to my grandmother or being dragged along to coffee mornings in the local town hall when I was growing up. We would sulk until we were given a pound to buy a cup of tea and select a cake from the home baking stall. There is something familiar and comforting about them. They are sweet and straightforwardly honest. Bite into them, and the golden outside reveals the snowy-white coconut inside.

Now, it’s confession time. I tried a couple of different versions of these macaroons. There are two schools of thought. One is the “easy” way, just mix coconut with sweetened condensed milk and a little flour, and bake. I tried this, but didn’t really like the result. The coconut seems to absorb the milk, and the resulting macaroons were a little too solid for my liking. Next, I tried the “complex” method. This time, I used egg white and sugar to make a simple meringue, then add lots of coconut. Now these were the sort of macaroons I remember. The outside is delicately golden, the inside snowy in colour and texture, and after a day or two, they soften and become just that little bit more luxurious.

These are just perfect as a petit four with coffee. They don’t take more than 5 minutes to make (assuming you have an electric whisk!), and they don’t involve any of the faffing around you have with macarons. No counting the number of strokes to mix in the dry ingredients, no piping, no worrying if the tops of the macarons are too dry, or not dry enough, no fretting that they will erupt, volcano-like, in the oven. Just whip, stir, roll and bake. 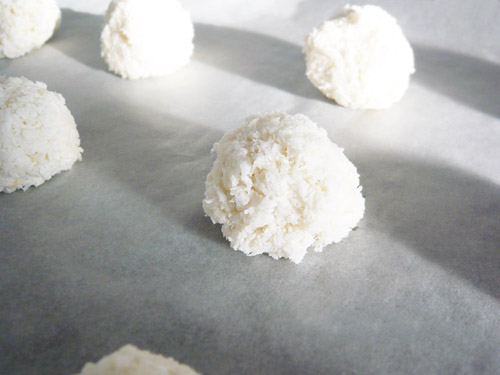 To make coconut macaroons (makes around 40):

Place the flour, salt and coconut in a bowl. Mix well and put to one side.

In another bowl, whip the egg whites with the cream of tartar until you have stiff peaks. Add the sugar, and whip until you have a smooth, glossy, stiff meringue-like mass. Stir in the vanilla extract.

Add the dry ingredients to the meringue and combine. Be gentle, but mix it all well. Take teaspoons of the mixture, form it into rough balls, and place on the baking sheets (2-3 cm apart).

Bake for 20 minutes until the macaroons are just starting to turn golden. Remove from the oven and allow to cool. If you can, leave to sit for 24 hours before eating so they soften a little.

Worth making? If you like little bites that are not too sweet, these are great. They also soften a little if you leave them overnight, so they are perfect is made the night before. However, I’m going to continue on my quest and try a few more recipes until I get “then one”. This is good, but I just want to experiment a little more.