Today’s feature is a challenge that came to me via Twitter. Never one to turn down a challenge, I went for it.

Yes, Pound Cake. This is something that I always thought was American in origin, but it seems it is actually British and dates from the 1700s. The idea was that you would carefully balance your eggs on one side of your tilting scales, and then use them to measure out the same weight of butter, sugar and flour.

So the recipe is simplicity itself – the name comes from the fact that you take a pound of each ingredient. Back in the day, this would have involved several steps to properly mix the batter, and heroic amounts of whisking and beating to get sufficient air into the mixture so that it becomes light when it was baked. Later on, and thank goodness for the advent of leavening agents, you could add baking powder and the batter would then just puff up all by itself.

The way you measure ingredients might also sound familiar (for example, the British Victoria Sponge or the Spanish Magdalenas), but the finished cake is as much influenced by how you mix it together. There is no mystique or delicacy involved here – Pound Cake is a robust name, and it comes as no surprise that in its modern form it is a robust put-it-all-in-a-bowl-and-mix-well cake.

So much for the theory, let’s bake. But I did have a bit of an issue with the volumes. In my recipe, I find that three eggs is about right. By all means go ahead and prepare something that involves a whole pound of butter, but you’ll find that you can scale the ingredients very successfully. I’ve also seen recipes from time to time that use different ratios of ingredients. Now, I am quite sure that these recipes are very nice and may make a very nice cake, but are they a Pound Cake? I would say not. Another tweak of mine is to add a little grated lemon zest. This is not traditional, but I think that it adds a little extra freshness to the finished cake.

The final result was great. Sweetly fragrant, buttery and, in my version, just a little hint of vanilla and lemon. You don’t want to go overboard with the flavours here, as plain Pound Cake is also a real treat on its own. It also has a fantastic texture – a buttery, golden colour and a velvety texture. An excellent all round teacake. 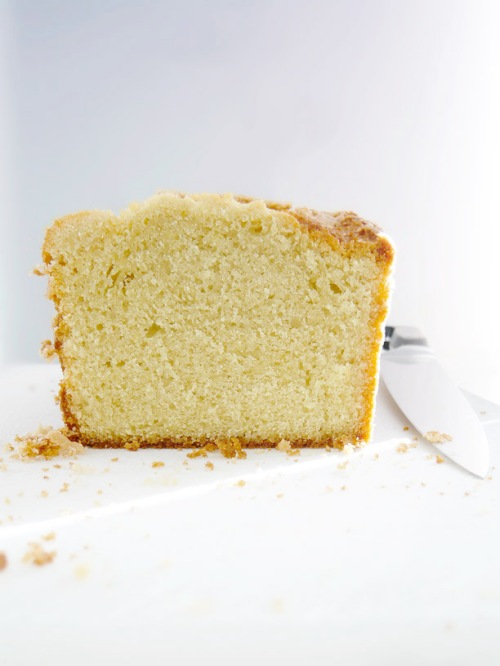 To make a Pound Cake:

Leave the ingredients out so that the come up to room temperature.

Put all the ingredients into a bowl. Mix until well combined and the mixture is fluffy (you will find an electric beater rather useful here). Put into the prepared loaf tin, sprinkle with a little granulated sugar, and bake for 45-50 minutes until risen and golden, and an inserted skewer comes out clean. If the top of the cake starts to get too dark during baking, loosely cover the top of the cake with tin foil.

Worth making? Absolutely. This is a simple yet superb cake. In days of macarons, cupcakes and whoopie pies, a well-made Pound Cake still holds its own. There are no tricky techniques to master, and you get to enjoy sneaky slices with cups of tea for days afterwards.