As you may have worked out by now, I have a bit of a thing for Scandinavian food, so I have turned my hand to making a Swedish specialty called drömmar (droo-mar).

The name translates as “dreams”. As you would expect from something with that sort of name, they are very light, melting little morsels. You’ve probably got a little bit of Mama Cass going around you head by now… 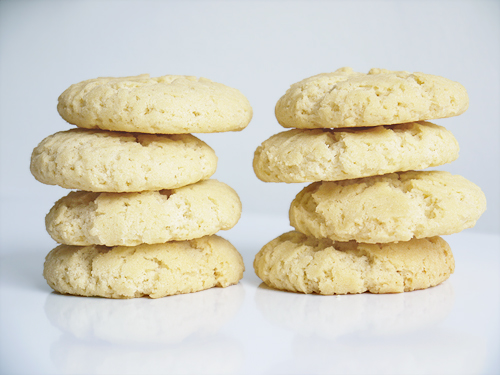 Now, the lightness really is their star quality.

These are really quite simple biscuits – just butter, sugar, flour and a dash of vanilla. The magic comes from what you add to make them rise. Not normal baking powder, but ammonium carbonate. This difference matters – it doesn’t just give baked goods a little lift, it releases a lot of gas so things get very puffy indeed. It was a bit of a saga to find this stuff, so I was quite excited to finally try making a cookie that I associate with my time living in Stockholm.

However, this magic powder has a downside. It stinks to high heaven!

I found this our pretty quickly. I made the dough – a breeze, took no more than five minutes (helpfully no need to bother chilling the dough) – shaped the biscuits, and put them into the oven. Boy did they rise!

Then…when I opened the oven to remove them, as expected, there was a horrid pong of, well, ammonia fumes that filled the kitchen for a moment. All I can say is that I am very, very glad I attempted this on a bright, breezy summer day, as all the windows were open and so the stink was quickly dispersed. 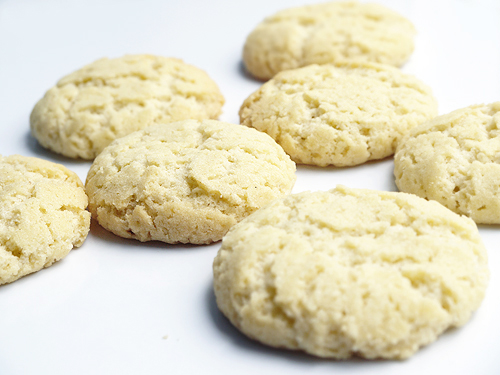 Having experienced the stink issue, but with the house once again fresh-smelling (i.e. not of ammonia), the cookies were ready.

They look good and strangely (given the earlier experience) they actually have a pleasant butter-with-a-hint-of-vanilla aroma. And they taste very good. Like shortbread, but with a very airy texture. You can see from the picture below that there are massive air pockets in the cookies, so they really are light as a feather – when you pick them us, they just don’t weigh anything. Most odd. Quite dreamy indeed.

When just baked, drömmar are crisp and light, but left overnight, they become a little softer. Either way is delicious, but which you prefer is up to you. Every Swedish mormor or farmor (grandmother) will have their own recipe, so this is just one version. There are others out there, and I make no claims that this is the only way to make them!!!

Biscuits made, I did a little research on this stinky but effective raising agent. Ammonium carbonate was originally known by the more poetic name salt of hartshorn, and was apparently derived from the horns of the male red deer (!). If you’re worried this might be cruel, I’m happy to note the antlers appear in the spring and are naturally shed each year, and in any event, these days you buy the chemical powder in stores. It inevitably features in German and Nordic baking, given that these are the areas in which the red deer might be found wandering in the forest, and in a lot of recipes, nothing else will really do if you want the requisite lightness. If you’re a curious Londoner, and don’t have deer roaming in the back garden, then you can buy it here.

The only limit on using this raising agent is that you need the stinky stuff to be expelled from the biscuits during baking – so it’s fine for small cookies, but you wouldn’t want to use it for a large cake. And just a couple of wise words to conclude – don’t eat the raw dough, as it tastes nasty until you bake it, and in case you are wondering – all the chemical stuff turns to gas, so there is nothing left in the cookies once they have been baked, and they are just sweet-smelling and tasty. And don’t we all like a bit of culinary alchemy?

If you’re still not happy using ammonium carbonate or just can’t find the stuff, use baking powder. You’ll get some lift, not as much as with the real thing, but still tasty.

So…relax, stick on a bit of Mama Cass, make a cup of tea and enjoy a couple of drömmar. Happy baking! 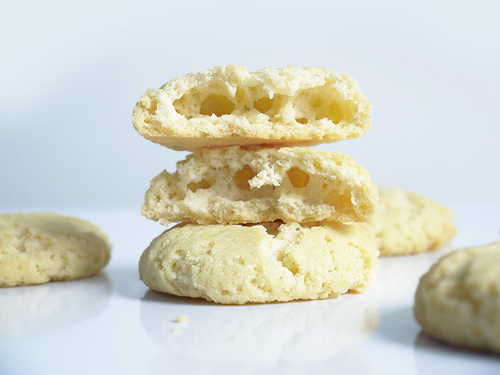 Cream the butter and sugar in a bowl until light and fluffy. Fold in the vanilla and ammonium carbonate.

Work the flour into the mixture until you have a soft dough.

Take tablespoons of the mixture and roll into balls. Place on the baking sheet (don’t flatten them), leaving at least 5cm (2 inches) between them.

Put the cookies into the oven and bake for 15 minutes. The balls will flatten down and then puff up, but will stay very pale.

Worth making? I was dubious about using ammonium carbonate in baking, but actually the outcome was great. The biscuits are lighter than anything I have ever made before, and there is of course the novelty factor of the stinky baking process. The mixture is ready in about 5 minutes, and can be made in less than 30 minutes from start to finish. As they say in Sweden – lycka till!

11 responses to “Dream a little dream…”