Are you familiar with the pomelo? If not, you probably just recognise it as a large citrus fruit, about the size of a large cabbage, that you may have seen in Asian greengrocers. The sort of fruit that looks interesting, intriguing, tantalising…but you just don’t quite know what to do with it.

Well, I finally got round to buying a pomelo and doing something with it. It seems that candied pomelo peel is a thing. So I set off on my way. I cut the thing open and spent ages picking out the flesh from the central segments. I expected it to be a juicy, messy, sticky affair, but it was actually quite easy – the membranes come away from the juicy parts, leaving a large bowl of pretty much intact pomelo flesh. I did this in the morning, so was able to sit down to to a bowl of what I expected to taste like grapefruit. I was all set for something sweet but tart and slightly bitter, but here was the first surprise – it doesn’t taste as you expect. Indeed, pomelo is sweet – sure, there is a hint of sweet grapefruit in there, but it certainly is not bitter, even if it doesn’t have the sugary hit that you would get with orange juice. I can see how this works in some savoury dishes too, where you want something to add a citrus tang, but without adding to much moisture or excessive sweetness.

Once the edible parts of the pomelo had been finished off (providing a welcome shot of vitamin C and fibre in these dark, snowy days), I set to actual preserving the peel. It’s a case of removing the white pith to leave the yellow peel, then boiling the peel a few times in clean water to remove any residual bitterness, before cooking the lot in sugar syrup until all the water has gone and the sugar end up in the peel. And it looks something like this: 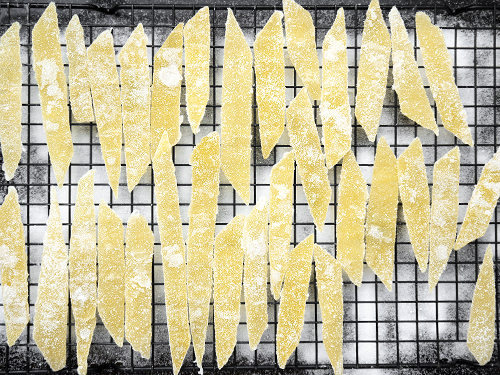 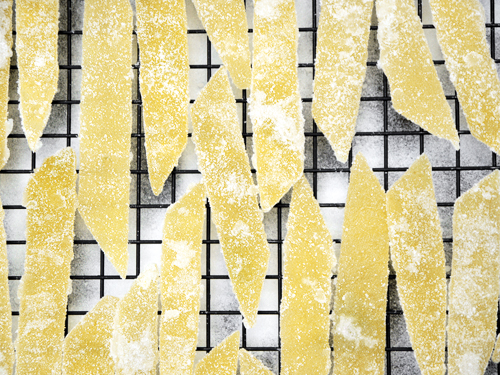 As you can see, I left the peel in quite wide strips with pointed ends. It makes it look rather dramatic when compared with the thin strips of candied peel you usually see.

The flavour of this candied peel is also stronger than the stuff you can buy (which is always the much-hoped-for perk of making something at home) and I think that pomelo peel is probably best enjoyed as a single flavour, for example, in a cake. You can use the same technique to preserve orange peel, which is of course fantastic when paired with dark chocolate, but I suspect pomelo doesn’t want to get involved in all that tempering-and-dipping business.

And finally, for fun, I presented it in a glass. Looks a little bit like the crown of Jadis the White Witch from the Chronicles of Narnia, don’t you think? 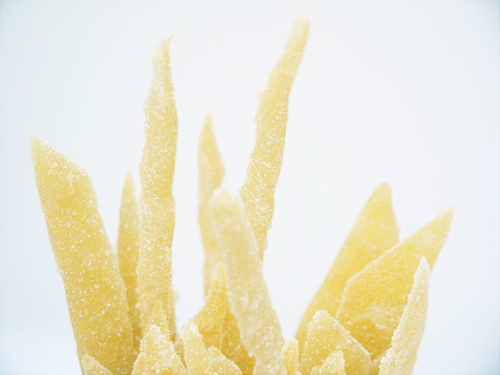 2. Put the strips into a saucepan of hot water. Boil for 5 minutes, then drain and rinse in cold water. Squeeze out as much water as you can. Repeat this process at least four times – this should remove any bitterness from the peel.

3. Put the no-long-bitter pomelo peel, cold water and sugar into a saucepan. Bring to the boil, then simmer on a very low heat for around an hour until the peel looks translucent and the syrup has been absorbed by the peel.

4. Transfer the peel to a wire tray to cool. If desired, roll each piece of peel in caster sugar (this will give is a sparkling appearance). Leave to dry – if you want to hurry things along, place the rack on a tray in the oven at the very lowest temperature you can (around 50°C). You want to dry the peel, not cook it.

5. Store the peel in an airtight container and enjoy as and when you want!

Worth making? This is a fun thing to do with citrus peel if you have some spare – it doesn’t need to be pomelo – and can then be used in all manner of culinary delights.