Update: I’ve made another (better) version of these which you can see here.

Take a deep breath. This one is a bit fiddly.

If you know what Aachener Printen are, you are probably thinking right now that I am mad. Why on earth would I be making these in the middle of summer? A good question, and one which might make sense by the them you reach the end of this post.

The potential insanity stems from the fact that Aachener Printen are…Christmas biscuits. They are a variety of the German Lebkuchen (lit. “cake of life”), which are made with honey, flour and a variety of spices. Back in the day, spices were a precious commodity, and so these biscuits would be used medicinally, and were originally sold in pharmacies.

So yes, it’s still swinging between baking hot and warm and muggy, while I am making a start on stuff that we won’t eat until December. So why start now? Well, when you make these things, they are rock hard, and take a while to soften. While this is going on, the flavour of the spices will develop, and basically the longer you keep them, the better they should taste. That’s the theory.

Another reason to make them well ahead of time is that you allow the spices to do their thing, then some time in late November, you can add a bit of apple to the biscuit box to allow them to start softening. You see, while these biscuits are hard, they don’t dip very well. You can try sticking them into tea (or coffee/hot chocolate/mulled wine), but they turn to mush. So the trick is, they need to soften slowly. I made these last year at the start of December, and by Christmas Day, you could just about eat them, provided you had all your own teeth, no dentures and a spare half hour for what turned out to be a real lower jaw workout.

Making them is quite easy, but you need a bit of time. The dough is really just sugar, honey, flour, chopped candied peel and some spices. You allow it to sit for a few days (so the flavours begin to develop), then add a little water and raising agent. Then roll out, sprinkle with crushed candy sugar, cut into slices and bake. The end result is a rich, aromatic biscuit which has all the festive aromas of Christmas. I just have they joy of these smells in the middle of a heatwave. Odd, most odd.

To wrap up this fit of non-seasonal festive insanity, I should point out that the name “Aachener Printen” is a protected designation of origin. That means that you can only call them by this name if they are made in or around the city of Aachen. So just be careful if you plan to hold a bakesale – you don’t want to be arrested! 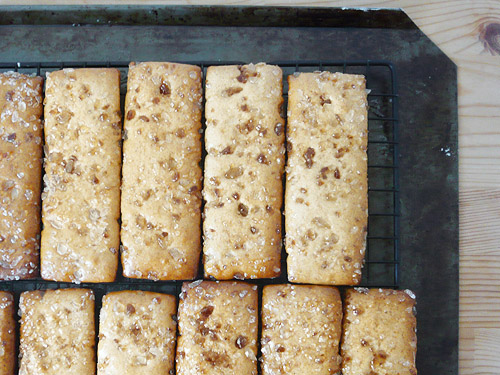 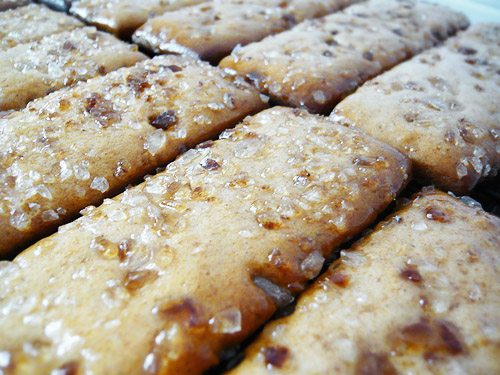 To make the Printen (makes around 20):

Chop the orange peel very finely. Either do this by hand, or pulverise in a food processor.

Put the honey and sugar in a saucepan and heat gently until the sugar dissolves. Turn off the heat and put the pan to one side.

Add the flour to a bowl with the salt, cinnamon, aniseed/star anise, cloves and nutmeg.

Add the orange peel and the honey to the flour, and mix until the ingredients are well combined. At this stage, the dough will be very firm.

Place the dough in a plastic container, seal, and leave at room temperature for at least two days. I got a bit busy, and left it to sit for two weeks with no adverse effects.

Pre-heat the oven to 200°C. Lightly grease a sheet of greaseproof paper.

On a lightly floured surface, roll out the dough to 1/2 or 3/4 cm thickness. Sprinkle with the candy sugar(*) and pass the rolling pin over to press the sugar crystals into the dough.

Cut the dough into pieces of 4 x 12 cm. Place on the baking sheet, and bake for 12 minutes.

If you like your cookies to have a nice shine, when they come out of the oven, brush with a simple sugar syrup made with 100g white sugar dissolved in 100ml water (heat in a pan until the sugar dissolves).

(*) You might have to crush the sugar crystal to make them smaller. The ones I bought were about 1cm long, so I used a mortar and pestle to break them down into pieces of 2-3mm.

Worth making? Well, not sure yet! The ones I made last year tasted nice, but were a bit difficult to eat. I should be able to report back in December on just how they taste. If they’re good, I’ll be the envy of every Bavarian Hausfrau.