Autumn days mean autumn flavours, and what could be more autumnal than cinnamon? Well, probably pumpkin, but at the weekend, I thought it would be smart to wait until after Halloween, then pick them up cheap, he he. So on Sunday, I stayed with my favourite spice, cinnamon.

To make something a little special, I used my rather fetching canelé mould, but so far, have not used it for baking. I do promise at some stage to make proper canelés, but they seem rather tricky, so I might set aside an afternoon to make them properly. And this is how I decided to make my new cinnamon teacakes. I have to confess that the idea of using this mould for teacakes it not my own, but comes from a post on the Cannelle & Vanille blog, which I had to admit I tend to look at more for the pictures than with a view to making the recipes, she’s such a professional! If pretty little brown butter cakes can be made in bundt pans, why not use my canelé mould? I seemed so obvious once it was pointed out! 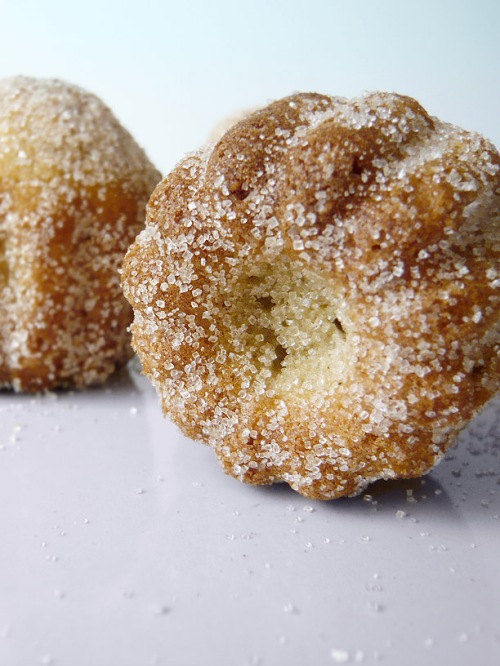 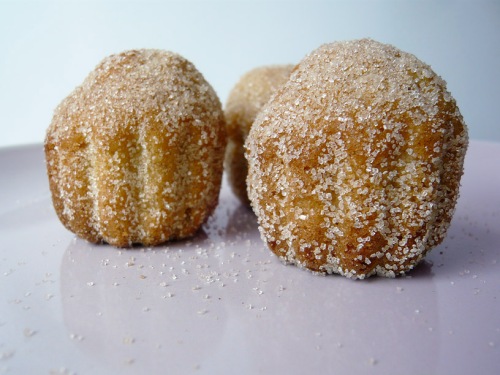 I thought about using cupcake batter or normal sponge cake for this recipe, but settled on my recipe for madeleines. But in the interests of experimentation, I made a few tweaks to the recipe. First, I replaced some of the flour with ground hazelnuts to add an extra flavour and some texture to the cake. In an ideal world, I would have used hazelnuts with the skin still on to provide little brown specks in the cakes, but I settled for the blanched hazelnuts in the kitchen cupboard. Next, I added two tablespoons of hazelnut oil to the butter, just to add to the nutty aromas. Finally, and most unsurprising of all, I added a 1/2 teaspoon of ground cinnamon. This seemed like the right amount, so there was a waft of spice, but it should not be too intense. I planned to roll the finished teacakes in cinnamon sugar, so the batter did not need to have too much cinnamon in it.

After all my hard work, I am very pleased with these little teacakes. Aromatic and sweet, they hold their own against fancy baked goods laden with icing. They have quite a firm texture, which I quite like compared to the usual soft crumb of cupcakes.

Out of interest, I will try making a sponge cake version of these by way of comparison, but for the moment, I am happy with this newly made-up recipe, and they will certainly be gracing the table next time I organise an afternoon tea. I can just hope that I can make teacakes that look as pretty as those on Cannelle & Vanille! 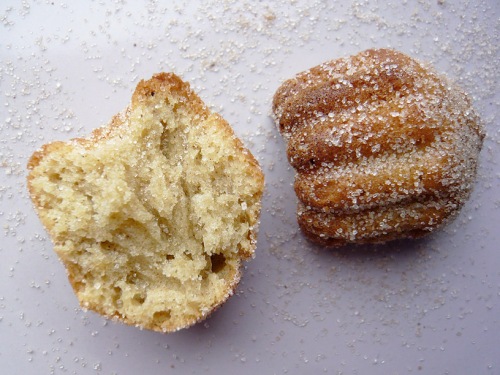 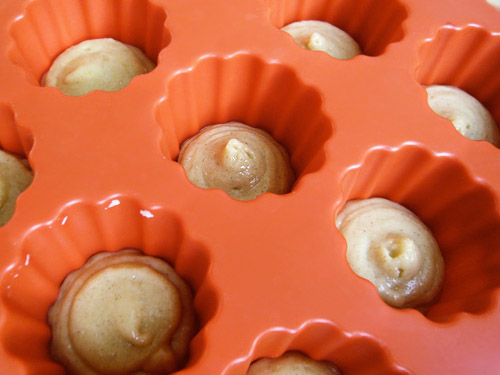 Melt the butter in a saucepan. Remove from the heat, stir in the hazelnut oil, and allow to cool.

Put the eggs, caster sugar and vanilla extract (if using) in a bowl. Whip for 5 minutes until the mixture becomes light and thick.

Combine the flour, ground hazelnuts, ground cinnamon and salt and baking powder and sift. Add the flour mixture to the eggs and stir lightly with a spatula until combined.

Add the cooled liquid butter and incorporate using a spatula. Let the batter rest in the fridge for 4 hours.

Preheat the oven to 190°C. Fill the tray with the batter and cook for 15 minutes, until the cakes are lightly browned.

Once cooked, remove from the oven and allow the cakes to cool completely. Remove from the tray, and roll each one in the granulated sugar/cinnamon mixture. Store in an airtight container.